The Lost Cajun has built its audience by offering authentic Louisiana dishes, like beignets and coffee, to its loyal customers.

What was a Cajun restaurant doing in the mountains of Colorado? As Raymond Griffin would soon find out, it was laying the groundwork for a national brand.
January 2017 Danny Klein

Raymond Griffin will be the first to admit he got taken. The $35,000 dream turned into a $100,000 one. Then came food costs, labor costs, bad hires, and even worse hours.

“I got hammered pretty bad,” he says.

But from the first moment Griffin toiled away, 10, 12 hours a day in his 15-seat, 850-square Lost Cajun restaurant in Frisco, Colorado, he glimpsed a promising future. The concept, which is as literal as its owner, was a hit from the outset.

You could ask the question, what is a Cajun restaurant doing 9,000 feet above sea level in a town that averages 175 inches of snow a year? It’s about as likely as Griffin himself manning a kitchen in the mountains, or suddenly directing a chain that’s on the verge of opening its 12th unit.

The 61-year-old admits his journey, which he calls a “phoenix rising from the ashes,” could be deemed crazy by some. He was working a six-figure job in Lafitte, Louisiana, a town around 25 miles south of New Orleans, as a national training director for a conversion van business. Yet the only thing that really seemed to interest Griffin was fishing. He quit, opened a lodge, and operated the business with his late wife, Belinda, for 15 years. It was during that time he started evolving into a Cajun chef. 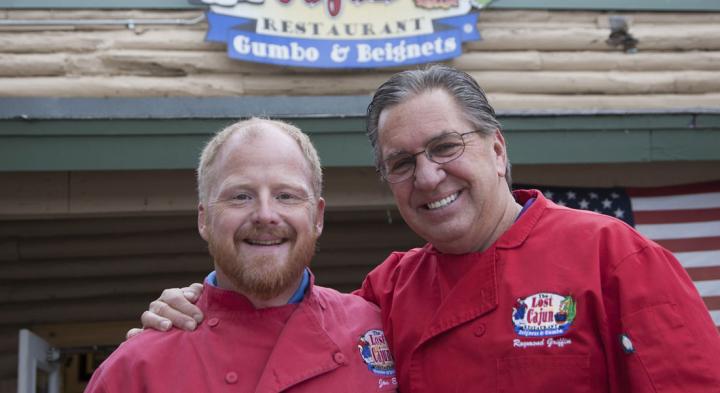 Like many Louisiana natives, a torrent of disaster befell Griffin in the mid-2000s. Hurricane Katrina, Rita, Ike, and Gustav came, followed by the Deepwater Horizon oil spill. Griffin turned his lodge into a housing facility for BP workers, running boats filled with meals to mop-up sites throughout the region.

When things settled, the Griffins hopped in a RV and took a vacation. They set the GPS to Durango, Colorado, but only made it Frisco when Belinda’s back gave out. This turned out to be a one-way booking.

Griffin is often asked what prompted him to start The Lost Cajun. It's a simple query, really. Griffin was, truly, a lost Cajun. Not only did the concept feel smartly and opportunistically out of place, but also Griffin had no idea what he was doing. 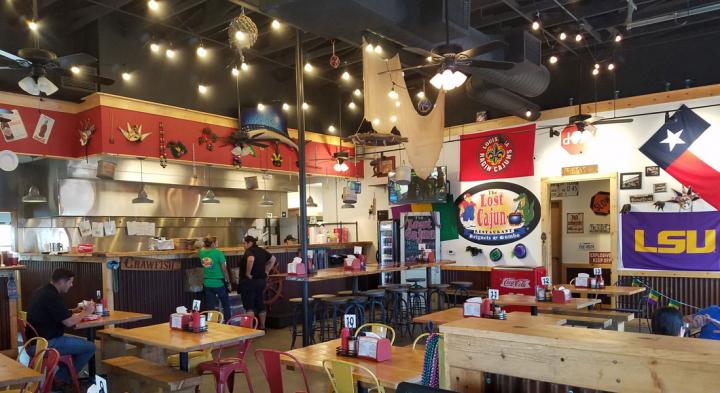 Many of The Lost Cajun restaurants have a small footprint, but the newer franchisees are opening larger units.

A story he tells to illustrate the point: When Griffin started constructing the first unit, his builder asked where the hood vent might go. “I said, ‘Well, there’s a door right there where I’m going to put a big fan,” he recalls. “They started laughing and I looked at them and said, ‘What? I can get a bigger fan.’”

Griffin says he made some poor hires who sold him “a bill of goods” and took advantage of his inexperience. He balanced the storm by covering the operation’s holes himself, until he was able to forge a solid relationship with his supplier, Sysco.

“Those are the guys who taught me what food costs were and what a good optimal goal would be. I learned from them, and hard knocks,” he says.

This was all in 2012. Two years later, along with a lifelong friend, Jon Espey, who hails from Alabama and was soundly impressed with the restaurant, they were opening a second Lost Cajun in Breckenridge. Espey came up for a visit and noticed quickly what kind of potential this brand truly had. 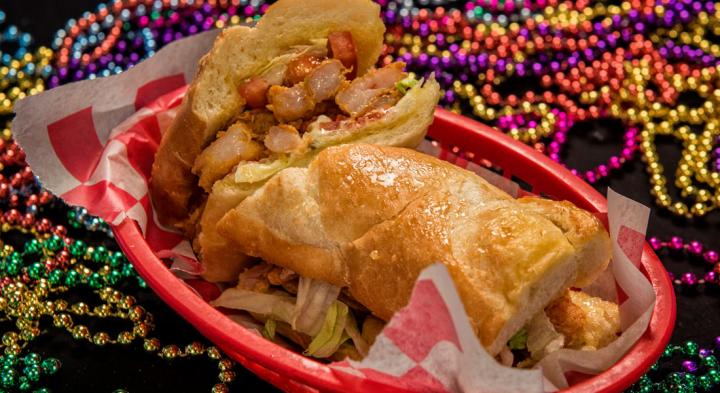 The Lost Cajun originally had only four menu items. That's increased over the years as guests have requested more.

“What we learned was that we could replicate it,” Griffin says. “We kind of looked at each other with that aha moment and said, ‘Look, it’s working.’”

Through the tumult, the learning stages, and the evolution, The Lost Cajun has remained steady on one level. People love it. They love the food, the service, and Griffin himself.

The amount of guests who walk through the door and leave saying, “Why isn’t there more Cajun food in Colorado?” humbled Griffin. He realized long ago that people who visit New Orleans and then seek out shrimp étouffée at home find the result dispiriting. About the only place diners can discover this kind of cuisine recreated is at the hands of specialty restaurants and chefs, a la Emeril Lagasse and Paul Prudhomme. But to find it accessible and affordable, as well as authentic, is almost mythical.

Griffin enjoys defying odds and educating the masses. When you walk into The Lost Cajun, you’re handed a sample platter on a paddle with seafood gumbo, chicken and sausage gumbo, crawfish étouffée, red beans and rice, lobster bisque, and chicken and sausage jambalaya. 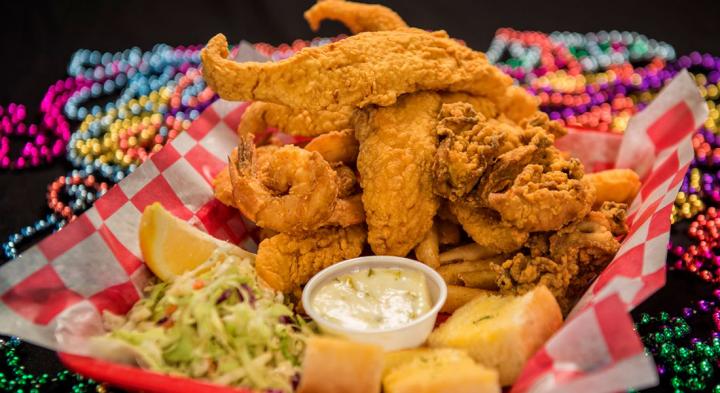 Seafood plays a leading role on The Lost Cajun's menu.

When the second unit saw a similar year-over-year increase, the franchise plan was hatched. All units moving forward will follow this model.

Griffin has allowed the interest to spark organically. There’s a sign in the restaurant informing guests to ask about opportunities to own a Lost Cajun. Really, that’s been the entire basis of what came next. One after another, until there were 12 total, guests would show up and fall in love with Griffin’s restaurant, realizing that, a. they wanted one, and b. it would deliver dividends if they opened it.

There are Lost Cajuns in Littleton, Glenwood Springs, Pagosa Springs, and Fort Collins, Colorado. Two in South Carolina: Greenville and Lexington. One in Hendersonville, Tennessee, and two in Texas: Odessa and Midland. San Antonio is on its way.

And each of these units has a story.

One couple was operating a dog sled business before trying the food and signing on. Another, who worked at Jimmy John’s and Chick-fil-A, brought his parents to sample the food and left with the same idea. This kind of personal touch is part of The Lost Cajun’s fabric, and Griffin doesn’t want that to change. 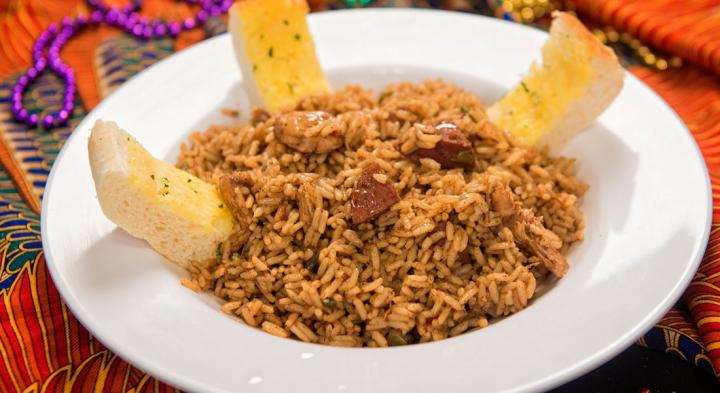 One of the keys to The Lost Cajun's success has been finding a way for its staple dishes to travel, like the jambalaya.

In response, he won’t let it boom too quickly. He says he can see 50, 75, or 100 units perhaps in the end, but that he wouldn’t want to grow by 10 or 15 per year. He plays a very intimate role in each new store and enjoys teaching the franchisees about The Lost Cajun’s culture, which is one of “yes sir, no sir,” and timeless hospitality.

In addition to making some key hires, which included tabbing a former Titled Kilt executive to clean up the operations manual and help stabilize growth, Griffin says he figured out a way to make gumbo, which takes four to six hours to cook at The Lost Cajun, travel.

Traditionally, you need a chef standing over a pot, monitoring each step, to make it work. What Griffin does, however, is cook gumbo in 300 to 500 gallon batches. He makes the base in a controlled environment, adding the same amount of onions, celery, and everything else. Then it’s bagged and shipped to the franchisees, who simply take it out, throw it in a 10—12 gallon pot, and toss protein in on-site. He does the same with the brand’s étouffée and jambalaya. 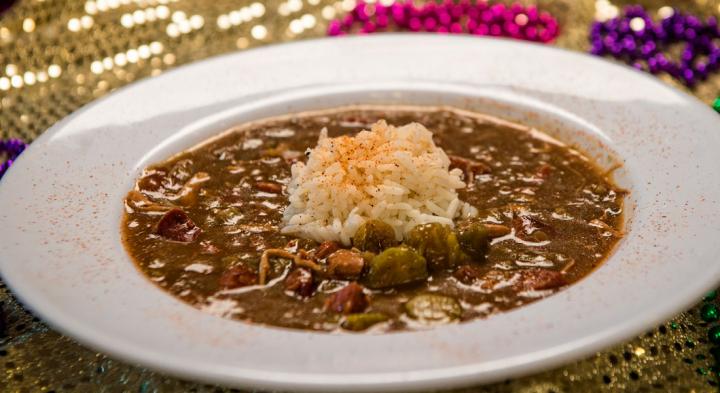 The Lost Cajun's Chicken Sausage Gumbo is a classic.

While Griffin says he’s still learning the ropes, The Lost Cajun now has the foundation to fuel its promise. “When I opened this store I didn’t know what food cost was. I didn’t know what labor cost was. I didn’t know anything about operating a restaurant,” he says. “The only things I knew was how to produce good food and how to give great service. Those two things right there I truly believe with all my heart if you do those two things first, all the other things will fall in place.”