Andrew Zimmern brought on Alex Ong, a Malaysian-born chef whose career has focused around Asian and Chinese food, to help with the menu at Lucky Cricket.

With his newest restaurant concept, Lucky Cricket, chef and TV personality Andrew Zimmern is plotting an ambitious track for his Chinese restaurant. And stirring up some serious controversy along the way. Lucky Cricket opened in a mall in the suburbs of Minneapolis on November 20. Inspired by the cuisine of the Sichuan, Xi’an, and Hong Kong regions of China, Zimmern took authentic dishes and translated them into a menu that Midwesterners would appreciate. This is the first full-service restaurant Zimmern has opened since beginning his TV career.

The concept seems harmless. A new elevated chain of Chinese restaurants that would give other Chinese restaurants, like P.F. Chang’s, some competition. Zimmern’s dream for the brand is to open more than 200 Lucky Crickets throughout the Midwest. “My life’s work has always been about exposing people to different cultures through food, so my goal with Lucky Cricket to take guests on a journey and showcase the authentic flavors of the Chinese foods that I love,” Zimmern said in a press release about the opening.

In a video interview with Fast Company, Zimmern went further into detail about his vision for the restaurant. “I’m going to pursue the big marketing idea and try to put 200 of them around because I have a lot of ambition from a business model standpoint,” he said.

His comments throughout the interview, though, have some critics questioning the move. Zimmern told Fast Company, “I think I’m saving the souls of all the people from having to dine at these horseshit restaurants masquerading as Chinese food that are in the Midwest.”

Eater points out this comment discredits the cuisine of the Hmong community in St. Paul, which Zimmern, a native Minnesotan, has lauded in the past. Zimmern’s questionable comments continue throughout the interview with Fast Company. Zimmern’s career has surrounded him traveling to different destinations and showcasing regional specialties from around the world. This experience positions Zimmern to open such a diverse concept.

His stance is clear: You don’t need to be from a certain place to make a certain food. With that thought in mind, Zimmern justified his ability to cook this type of food even if he isn’t of Asian descent. However, Zimmern took aim at P.F. Chang’s co-founder Philip Chiang, explaining to Fast Company’s Mark Wilson that Chiang ripped off his mother’s— Cecilia Chiang, an iconic culinary figure—concept by creating the P.F. Chang brand. “I mean, was P.F. Chang’s not a ripoff because Cecilia Chiang’s kid owned it?” he said in the video. “Because, despite how he looks on the outside, he’s a rich, American kid on the inside, right?” 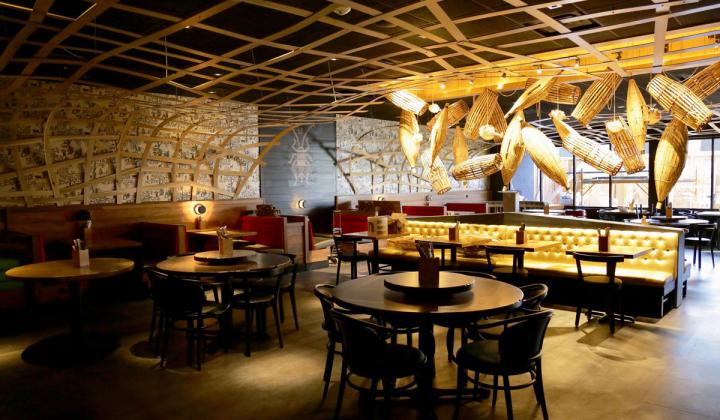 The Lucky Cricket is inspired by the cuisine of the Sichuan, Xi’an, and Hong Kong regions of China.

In an email to Eater, Zimmern clarified his divisive comments about Chiang: “My point was simple. Michael White is one of the best Italian cooks in world, just because he is from Wisconsin doesn’t mean he shouldn’t be able to open an Italian restaurant if he so desires. Same with Bayless and Mexican food. I think P.F. Chang’s was a great example, that family had the name and the cultural background, and were great restaurant people, still are. But by the time PFC opened the family was as ‘American’ as I am in a sense. It was a vague metaphor but I hope people got my point. I guess not entirely clear. And this question of ‘who gets to cook what’ is one we all have to consider. It’s an important one.”

Zimmern brought on Alex Ong, a Malaysian-born chef whose career has focused around Asian and Chinese food, to help with the menu at Lucky Cricket. Even though Zimmern has “translated” Chinese foods at Lucky Cricket, Ong’s expertise helps infuse authenticity into the menu. Some of those dishes include Sichuan-inspired toothpick lamb, Dan Dan Noodles, a chicken-and-waffles entree featuring Hong Kong-style bubble waffles and Shanghai-style fried chicken, Hand Pulled Xian Cumin Lamb Noodles, and Signature Dim Sum.

The highly debated question about whether or not Zimmern is the right person to open this concept will continue to come up as the restaurant grows and evolves. But if not Zimmern, then who could open this concept? Whether you agree or not with his controversial comments, Zimmern stands behind his belief that he’s the right person to do this and do it right. Left up to someone else, a person’s first experience with authentic Chinese food might not be so authentic, Zimmern said.

“It’s true that this market needs that kind of thing, and it’s true that I want to do it,” Zimmern tells Fast Company of pan-Asian-style restaurants like P.F. Chang’s and Lucky Cricket. “Does it need to happen? I think it does, I think it does. Someone else is going to do it, someone else is going to be the next P.F. Chang’s, and I don’t want ’em to blow it. And is it up to me to do it? I don’t know. I certainly think I’m in the conversation, you know? And just because I’m not Chinese, I leave that to the rest of the world to judge. But if I can get people to open up their mind one degree, just spread those blinders one degree about something new to eat from another culture, I think we … the rising tide floats all boats. Plus we have a T-shirt that says ‘Get Lucky’ in Chinese on the back."