Before the outbreak, off-premises represented about 11 percent of sales at Native. It's now five times the number.

40 Years and a Pandemic Later, Native Grill & Wings is More Relevant than Ever

Native Grill & Wings CEO Dan Chaon wants his brand to be the first to put wings on Mars.

What does that mean? The goal traces back to the chain’s 41-year history when it claimed to be the first brand to bring wings to the Southwest. It’s a reminder Native forged into the off-premises game and inked partnerships with delivery providers years before the pandemic began. It translates to thinking outside the box to promote growth.

So as more brands dabble in the wings category, such as Chili’s, Applebee’s, and even Chuck E. Cheese, Chaon simply takes it as a complimentary development.

“We clearly understand why they got into the wing business, right?” Chaon rhetorically asks. “It's not a secret out there. Wings travel well. They’re a staple for people congregating, whether it's at a birthday party or watching the game at home or binge-watching something on Netflix. It's a hard item to produce. It's a hard item to duplicate at home, and it's a very craveable item. So what I tell my team here, what I tell our guests, what I tell our brand ambassadors is, I get why they're doing it. I want everybody's business to be very successful, but we’re first to bring wings to the Southwest. We're going to be first to put wings on Mars. That's what we do. And at the end of the day, I just got to concentrate on my backyard. So it’s exciting to see brands doing innovative deals. But I've got to be the best of what we do, and that is cold beer, great wings, places where people feel comfortable coming to dine in or dine out at.”

The optimism surrounding 23-unit Native can be attributed to its performance throughout the COVID crisis.

Before the outbreak, off-premises represented about 11 percent of sales. Chaon says Native knew it had to amplify that channel to five times that number, and the brand achieved it almost immediately thanks to the early adoption of a COVID playbook. While other full-service restaurants ran 75 to 80 percent down, Native saw declines of only 45 percent in the first month and a half.

The restaurant experienced sales growth in September year-over-year, and that’s because the brand successfully executed its off-premises message, Chaon says. A majority of units have allowed 50 percent capacity for several weeks, but 30 percent of sales are still coming from outside the four walls. Loyalty signups soared 135 percent, which increased total membership to 250,000 and boosted loyalty sales by 25 percent.

Chaon says the brand, which is located in Arizona, Texas, and Illinois, has developed a cult-like following because of its 41-year legacy—he even remembers eating 10-cent wings while at Arizona State University. The CEO explains that although Native is an older company, it keeps itself relevant with its Native app and how it’s messaging across social media.

“The fact we were first to market 40 years ago, driving that message to our loyal guests is incredibly important for us,” Chaon says. “And I think that's why when you have a brand our size and we're up over a quarter million native users—active users—it's certainly important to us. It was everything for us as far as being a legacy brand.”

Currently, Native is working toward a prototype store that will further extend its relevance with consumers. Chaon notes that the restaurant will remain focused on full-service and live sports, but the chain will do it in a more robust, smaller footprint with a potential pickup window.

The prototype is also informed by social distancing changes and how customers are greeted at the table. For example, Native is examining the use of QR codes, a feature that went from dead a couple of years ago to the “best thing since sliced bread” amid the pandemic, Chaon says. 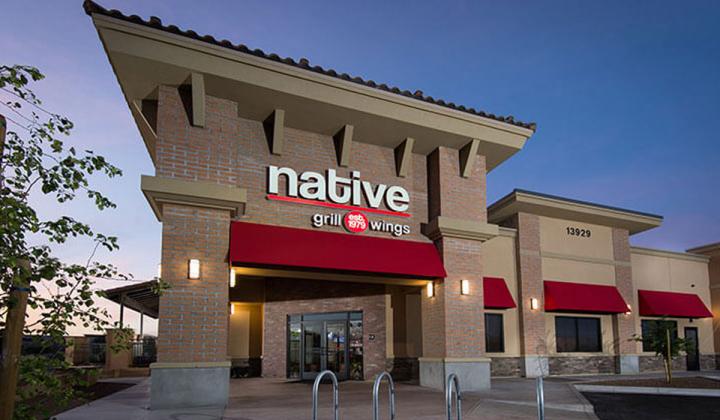 “Any of that old world thinking into the new world thinking—that’s what we're going to do with our new prototype,” Chaon says. “… We want to get as much information from all of our constituents. So whether those constituents are guests, whether they are vendors, whether they are people that we know as far our competition … If we can take what we do today well and we can incorporate really our core values—so our passion for what we do in our community, the integrity of our brand, the quality and craveability of our food, the awareness, whether that be social awareness, awareness of what's going on in an economic environment, and connection to our communities—then we feel like we're gonna take all of that and our legacy, and we hope to put it into a 2,500 to 3,000-square-foot building.”

The CEO believes the pandemic will help stimulate development. Similar to other full-service restaurants, the tough times pushed Native to strategically realign P&L, such as smaller menus, implementation of staff, and better controls. These changes resulted in unit level profitability during the most critical months.

This allows the brand to create stronger franchising tools like the new operating partner program in which the company will tell the story of its legacy and use it as an accelerant to find operators.

The objective is to open two locations in 2021 and reach a four-to-six development pace by 2022. Chaon says that as a franchisor, Native wants to provide the best avenue to reach 40 units, not 100. And if the company crosses 40 and everything appears right, then the brand will set a new benchmark.

“We just want to take that little engine that could  and we want to put it now into a rocket ship,” Chaon says. “When I say we're going to put wings on Mars, that's going to be interpretation up to all the people associated with the brand, and we want to take that creative thinking, we want to get all the information that we can gather and data, and I think we can keep the brand growing. I think that if we look up tomorrow, I'd rather have 40 restaurants just kicking butt than have 100 restaurants struggling.”