During the pandemic, many restaurants turned to third-party platforms, but hefty fees have led some operators to rethink those partnerships.

Throughout the winter months, delivery has been one of the few avenues operators can count on for revenue. For many in full service, pivoting to a delivery system has become a necessity to stay in business.

That’s exactly what Brick Walk Tavern co-owner and chef David Snyder did when the restaurant first closed its doors last spring. But after researching a variety of third-party providers and running the numbers, Snyder couldn’t justify such a partnership.

“I’m a little troubled and a little disappointed in some of these third-party vendors,” Snyder says. “It would have been a good, sound business decision to maybe lower their margins to help the cause—and they didn’t.”

The business model, in which third-party platforms can take anywhere from a 15 to 30 percent commission, is something, Snyder says, the Fairfield, Connecticut, restaurant couldn’t afford. For him, the pandemic was an opportunity for these platforms to step up and support the restaurant industry. If these platforms had dropped their rates and worked out contracts with operators, the restaurants would’ve become loyal clients, he adds. 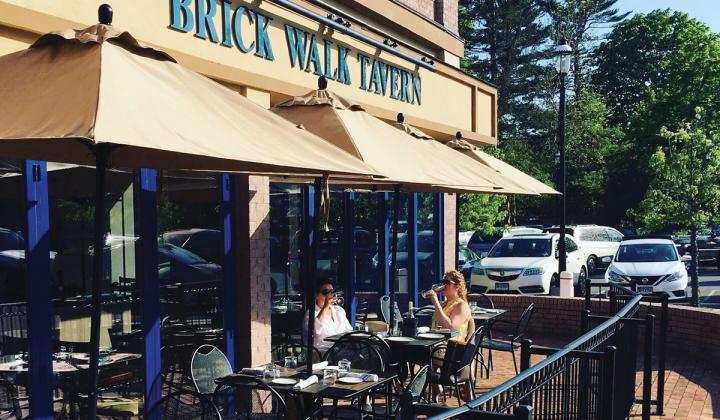 Al fresco dining may have helped Brick Walk Tavern in the milder months, but the Fairfield, Connecticut, independent also created its own in-house delivery system.

For Snyder, using the restaurant’s existing workforce is a win-win strategy over putting efforts toward third-party platforms.

“Who better to use than the people that have trained under your regimen?” he says. “We found it to be a great opportunity to utilize some of our laid-off workers to bring them in and allow them to make money delivering food for us, so it created an opportunity for us to help our labor pool.”

In the future, Brick Walk plans to continue developing online ordering efforts and other takeout concepts in-house. But for restaurants that decide to go the third-party route, Snyder says he doesn’t judge them for doing whatever it takes to stay afloat. 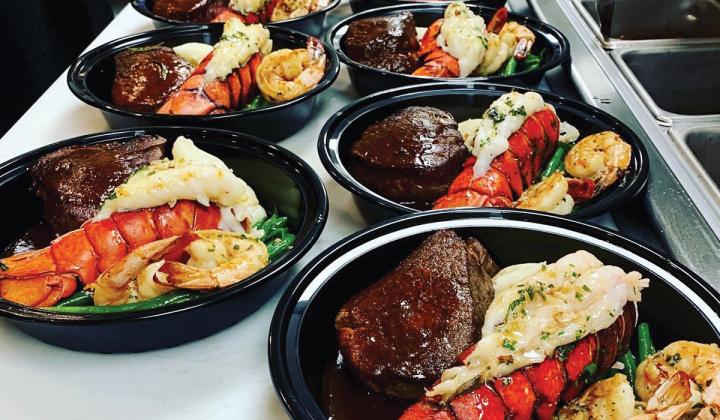 Restaurant consultant Mark Moeller of The Recipe of Success says there are several pieces that play a role in a restaurant’s decision, although cost certainly weighs the heaviest.

“Most of it comes down to the financial piece. When you’re giving away up to 30 percent of your revenue, that’s not sustainable,” he says. “It’s just like the landlords and rents. When you’re factoring in that you have a 10 percent rent factor and all of a sudden your revenue drops by 70 or 80 percent, you can’t sustain paying your rent. How are you going to sustain paying third-party delivery?”

Another factor that plays into the decision to go third-party is the restaurants’ ability to market their brand on the likes of Uber Eats, DoorDash, Grubhub, and others in the space. The breadth and scale of their consumer reach can be a strong pull for many operators.

Among his clients, Moeller has seen a halfway split between his clients partnering with third-party platforms versus developing their own programs. This divide often comes from experience. Newer restaurants may struggle to understand day-to-day operations, while established brands know best practices, especially when taking food off-site. As a result, his veteran operators are more likely to create an internal solution while newer restaurants may lean toward an outside arrangement.

For those sticking to the third-party option, some city governments have also installed laws to relieve costs. Philadelphia signed off on a 15 percent fee cap for third-party delivery, while New York City has implemented a 20 percent cap. However, these caps were signed as a short term response to dining room closures rather long-term solutions for the industry.

In addition, some third-party platforms are fighting against governmental action. When Chicago’s City Council installed a 15 percent cap in November, DoorDash responded with a $1.50 “Chicago Fee” for delivery and takeout orders.

With the threat of possible retaliation from third-party delivery, the solution to excessive fees may not come from the government, but rather through community-based solutions. In the small city of Rockland, Maine, local taxi company Schooner Bay Taxi has been partnering with restaurants in the area as a smaller third-party platform. 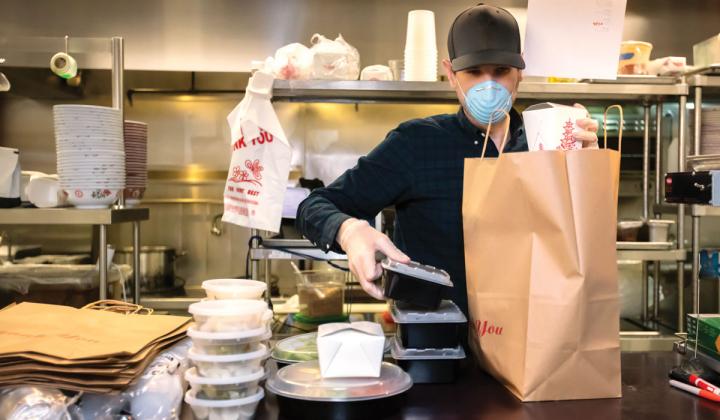 Delivery has become a double-edged sword for many operators, with revenues greatly undercut by partner fees.

The Grey Owl Bar & Grill owner Lexi Zable has been in talks with Schooner Bay Taxi and sees the partnership as a worthwhile opportunity.

“It’s great that they’re a smaller business and not like the bigger places because it’s all very personal,” Zable says. “People in the community are already familiar with them, as are we.”

This type of partnership isn’t just helpful for restaurants in Rockland, it also gives them the option of third-party delivery that might otherwise not exist. With a population barely more than 7,000 people, the area hasn’t received interest from large third-party platforms. And as the city sits in a county where it can be a half-hour drive to the nearest grocery store, a delivery option offers restaurants considerable benefits.

“Normally I would have to hire somebody. We’d have to take care of all the orders and the deliveries ourselves. And so it really makes it nice that we have that option now,” Zable says.

The long-term staying power of local platforms like Schooner Bay Taxi remains to be seen, especially as consolidation seems to be the name of the game. Cases in point: Uber acquired Postmates last summer, and DoorDash purchased Caviar the summer before that.

With consumers now accustomed to a catalog of off-premises options, Zable says the need for delivery is here to stay. But even if this small third-party option may only be a temporary solution, she appreciates the mutually beneficial option.

“I think that it’s really nice that we have these other options and that we don’t have to be do-it-yourself, especially in our community,” Zable says. “We have such a community feel; it’s nice to be able to utilize these other businesses and give them business, as well as them supporting your business.”