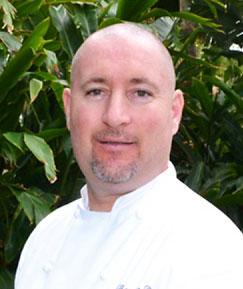 “My philosophy to cooking has always been simple,” Bellec says. “I source the very best ingredients while paying close attention to seasonality and the local climate, and I prepare them in a way that highlights and complements their natural flavours and distinct characteristics.”

At  Resort Hualalai, 75 percent of the ingredients used are from Hawai’i Island and are sourced from more than 160 farms. The Island of Hawai’i is unique in that it hosts 11 of the 13 world climates, allowing a wide spectrum of diverse foods to be grown and raised on the island. Chef Bellec and his team understand the importance and embrace the nuances of working with the multiple farmers and purveyors that provide the local ingredients for the Resort’s restaurants and other dining experiences daily. On-site at the resort, an herb garden supplies various fresh herbs and vegetables, and a carefully created pond is home to two types of oysters, grown and harvested a stone’s throw from where they are shucked and served to guests.

A Brittany, France native and classically trained in French technique, Bellec’s career has taken him across the world. Bellec began his career in France, working under his mentor, Michelin-starred Chef Henri Gaonac’h at Le Galion in Concarneau. He began what would later become an 18-year partnership with  Hotels and Resorts at  Hotel Toronto in 1999. Bellec has since held culinary leadership positions at  Resort Carmelo, Uruguay (formerly a  resort);  Resort Lanai;  Hotel Boston; and Beverly Wilshire, Beverly Hills, A  Hotel.

Chef Bellec, his wife Diane, and their dog Kimo are thrilled to be back in Hawaii after almost ten years away. When Bellec is not in the kitchen, he can be found fishing or taking landscape photography around the island.