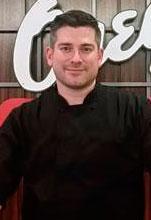 Roscoe Roberson will serve as executive chef at The Original Dinerant.

Born in Tucson and raised in New York, Roberson learned to cook from his grandparents. Finding himself in the kitchen in one way or another as he grew older, he transformed part-time jobs into a career. After deciding to attend culinary school in his hometown at Pima Community College, he trained as a chef with Starwood-Westin where he ran banquets for large groups. He later relocated to Bend, OR to operate Kokanee Café and then headed north to explore the burgeoning food city of Portland where he joined Chefstable Group.

Roscoe now calls The Original Dinerant his home and looks forward to maintaining a creative menu while establishing American diner food as an essential part of Portland’s culture. With experience in managing staff and back-of-house operations, having most recently opened and operated six new concept restaurants with Chefstable Group, Roberson brings a wealth of experience and knowledge to The Original Dinerant and Sage Restaurant Group.

“The sophisticated yet playful approach of The Original Dinerant is a new venture for me,” says Roberson. “I’m privileged to join the team and provide added imagination to the menu while continuing to contribute to the Portland dining scene.”

The Original Dinerant is Portland’s downtown destination for all-day dining. The restaurant renews the spirit of diners and supper clubs from the 1950s and 60s by serving up playful variations on the era's standards of food, art and design. The Original is open Monday through Thursday for breakfast, lunch, and dinner from 6:30 a.m. to 10 p.m., Friday from 6:30 a.m. to midnight, Saturday from 7:30 a.m. to midnight, and Sunday from 7:30 a.m. to 10 p.m.