Gunshow’s “Hired Guns” dinner is back on August 6 with New Orleans sensation, chef Justin Devillier cooking alongside chef/owner Kevin Gillespie and executive chef Joey Ward. Devillier is the chef/owner of La Petite Grocery and Balise in New Orleans and winner of the 2016 James Beard Foundation Award for Best Chef: South. A fisherman and trained chef in French cuisine, he is best known for his creativity in the kitchen and dishes such as turtle Bolognese, panéed rabbit and blue crab beignets.

Tickets for the August 6 dinner are $95 per person and will go on sale at 8 a.m. on July 6 via Hand-Picked Atlanta.

A California native, Devillier spent his summers fishing for yellowtail and albacore tuna and cooler months diving for lobsters just steps from his front door. This bounty of local seafood inspired him to enter the culinary industry. In 2003, he moved to New Orleans in search of a vibrant restaurant community and trained in the kitchens of Bacco, Stella and Peristyle, where he learned the intricacies of French cuisine. 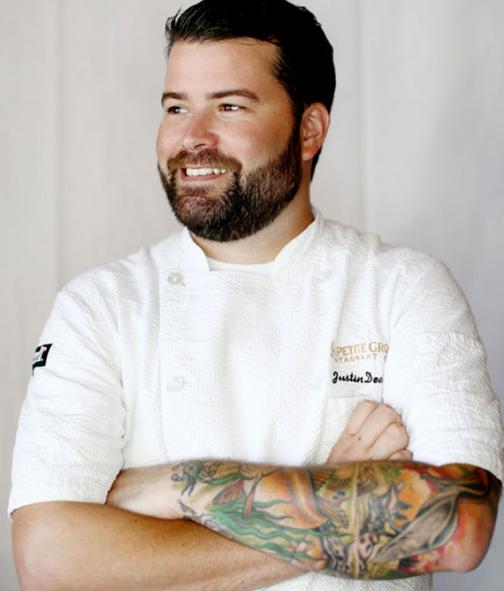 In 2004, Devillier joined the team at La Petite Grocery and helped re-build the restaurant’s infrastructure following Hurricane Katrina. Devillier and his wife eventually took over ownership of the restaurant, and in early 2015, opened their second restaurant, Balise. Set in a 19th century Creole townhouse in the Central Business District, Balise is a modern New Orleans tavern that celebrates the port city’s unique access to a wide variety of ingredients.

“Hired Guns” began in 2013 as a way to lure some of the country’s most talked about chefs to Gunshow for a showcase of their flavors and personalities alongside the restaurant’s featured items. Gillespie and Ward have continued to exceed culinary expectations with the series by welcoming Hakim Rahal and Pablo Rojas of Provisions in Montreal, Jennifer Carroll of Requin and Minneapolis’ Grae Nonas into the Gunshow kitchen this year alone.

Future dates and chefs include Jamie Bissonnette of Toro and Coppa in Boston on September 10 and Cara Stadler of Bao Bao Dumpling House in Portland, Maine and Tao Yuan in Brunswick on November 5.

Gunshow is located at 924 Garrett Street. The restaurant is open for dinner Tuesday through Saturday from 6 to 9 p.m. Reservations are encouraged but not required. Guests may park in the Glenwood Park parking lot and on the street.