Japanese Government Certifies CIA Students in Mastery of its Cuisine

Following the successful completion of the Advanced Cooking: Japanese Cuisine course on December 13, nine students at The Culinary Institute of America became the first American recipients of the Certification of Cooking Skills for Japanese Cuisine in Foreign Countries. After reviewing this innovative immersion into the cuisines and culture of Japan, the Organization to Promote Japanese Restaurants Abroad (JRO)—based on the guideline from the Japanese Ministry of Agriculture, Forestry, and Fisheries—authorized the CIA as the first location in the United States sanctioned to issue this special certification.

"We are most honored to have been selected by the government of Japan as the first U.S. institution authorized to certify culinary students as having achieved a significant level of mastery of Japanese cuisine," says CIA president Dr. Tim Ryan. "At a time when interest in Japanese flavors and food culture is accelerating among the public and aspiring chefs, we are gratified to be playing a critical role in making this expertise more accessible." 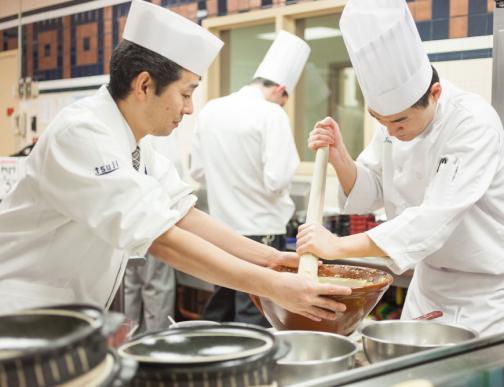 Advanced Cooking: Japanese Cuisine launched in the fall 2016 semester with the support of Suntory Group, one of the world's leading consumer product companies. Offered to juniors and seniors pursuing a CIA bachelor's degree, it was jointly taught by Chefs Martin Matysik of the CIA and Hiroki Murashima of the world-renowned Tsuji Culinary Institute in Osaka. Chef Murashima served as the CIA's first Suntory Visiting Professor of Japanese Studies.

"Suntory is honored to have contributed to the opening of this course," says Suntory executive officer Tomomi Fukumoto. "Students not only learn cooking techniques, but also Japanese traditions, as well as respecting nature and appreciating what each season gives us. The fact that Suntory is collaborating with the CIA to develop food professionals with deep knowledge about Japanese cuisine and Japanese traditions is a meaningful contribution for both the United States and Japan."

The students received their bronze-level certifications after preparing and serving a kaiseki cuisine dinner on December 13 as their capstone project for the course.

"Over the past three months, these select CIA students experienced an intensive, multifaceted discovery of Japanese flavors, techniques, and food culture," says Dr. Michael Sperling, the college's vice president of academic affairs. "We are very grateful to Suntory for its vision and commitment in making this course possible, and to JRO for recognizing our students' accomplishment in mastering the skills required to earn such an important certification."

The class, which will be offered to CIA students again in fall 2017, covers Japanese history and culture, along with the ingredients, flavors, textures, and techniques of authentic Japanese cooking. It delves into dashi stocks, rice and noodles, sushi, tempura, and the principles of umami, as well as the cultural aspects of the Japanese dining table. The course is the first phase of a broader CIA Japanese studies initiative, underwritten by a multi-year grant from Suntory.