The Food Channel Says a Sweet Year is on the Way

The Food Channel has released its "Top Ten Dessert Trends." Based on research conducted by The Food Channel in conjunction with CultureWaves, the International Food Futurists, and Mintel International, the list identifies the significant desserts that will be seen on the menu throughout the next year. 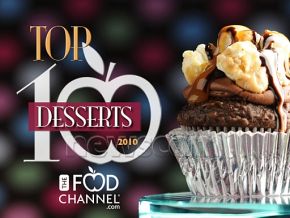 "Desserts are a great place to experiment with the non-traditional and unexpected," says Kay Logsdon, editor in chief of The Food Channel. "It's all about unusual pairings — everything from beer with dessert to donuts adorning milkshakes." The story around each trend is available on the website. Highlights include:

1. The Unexpected Complement These days we're all about trying something new to get us out of the everyday routine. So we're pairing sweet and savory in new ways (and it's not just about bacon). For further evidence, read: 860 Flavors of Ice Cream Including Beef-Cheddar and Cream of Crab.

2. You Say Macaroons, We Say Macarons In Paris and New York, dessert right now is all about macarons, which is like a colorful little sandwich made by a pastry chef. For further evidence, read: Are Macarons Destined to Unseat the Cupcake?

3. Dessert Meister What we're seeing now is beer coming into play both as a dessert ingredient and as a pairing option. This trend is probably the natural outgrowth of the rise in microbreweries, because any restaurant willing to brew its own beer just has to be a fan of trying new things. For further evidence, read: Belly Up to the Beer Dessert Bar.

4. Transformers This trend is about the use of common, everyday foods combined with familiar flavors then reassembling them in a new way. We're seeing it with Burger King's Funnel Cake Sticks, and at Mexican burger chain Burguesa Burger, where every milkshake comes straw-skewered with a donut. For further evidence, read: Gourmet Donuts Becoming New "It" Treat.

5. Tweet! Here Comes the Dessert Truck The Kogi taco truck and other maindish nomadic vehicles paved the way, and now the sweet treat trucks (really a trend in itself) are merging into the traffic of city life. For further evidence, read: Cupcakes Get Wheels.

6. Darwinist Desserts This trend is about the evolution of desserts and our human desire to make them what we want them to be. That could mean gathering up odds and ends of leftovers and turning them into something, and it usually means trying to deliberately create something that no one else has thought of. For further evidence, read: Girl Scout Cookies Make Great Recipe Ingredients.

7. Freshly Baked These days, bakers and pastry chefs are becoming a specialty business. If your town is typical, odds are good that you have some young entrepreneur opening up a cute little bake shop where they are baking amazing confections and selling them like hotcakes — er, cakes. For further evidence, read: Pastry Chefs Getting Their Just Desserts.

8. OK, Just a Bite This trend is the amalgamation of several others all rolled up into the smallest possible confection with the biggest possible burst of flavor. For further evidence, read: Marshmallows Getting Fancy in Canada.

9. Soda Fountain Fizz Last year desserts were all about ice cream, and we're still seeing it mixed in here and there. The usual dessert drink of port or a hot latte is getting some competition from some of the new floats, shakes, malts, and coolers. For further evidence, read: Floats, Shakes and Sundaes: Back and Better Than Ever.

10. The Sandwich Generation This trend speaks to the artisan within. We see it come to life in the traditional ice cream sandwich, as it evolves into something new. For further evidence, read: Ice Cream Sandwich Giving the Cone Some Competition.

For additional insights for chefs and other food professionals, check the commentary and deeper insights available from CultureWaves and Mintel International, as found on the new FoodChannelPRO, with sponsorship provided by MARS.