Park Hyatt Washington, D.C. announced the appointment of Daniel Hoefler as chef de cuisine of the Michelin-starred Blue Duck Tavern. Hoefler brings 16 years of experience to his new position having worked at esteemed restaurants throughout Berlin, Dubai and Chicago. He will work closely with Executive Chef Troy Knapp on creative menu development, and is excited to build on the legacy of the Blue Duck Tavern, embracing local farms and producers in the Mid-Atlantic.

“I am thrilled to be working in the nation's capital,” says Hoefler. “I know the culinary scene in Washington has grown exponentially in recent years and I'm excited to have the opportunity to be a part of it. I can't wait to begin working under the leadership of Chef Knapp and adding my own international perspective to what is already a very high-level dining establishment.”

Hoefler's fervor for cooking began in Berlin, Germany where his parents loved to cook and regularly entertained family and friends in their home. He graduated from the prestigious Brillat-Savarin-Schule in Berlin, Germany's largest culinary and hospitality school renown for European training with a focus on French cuisine. 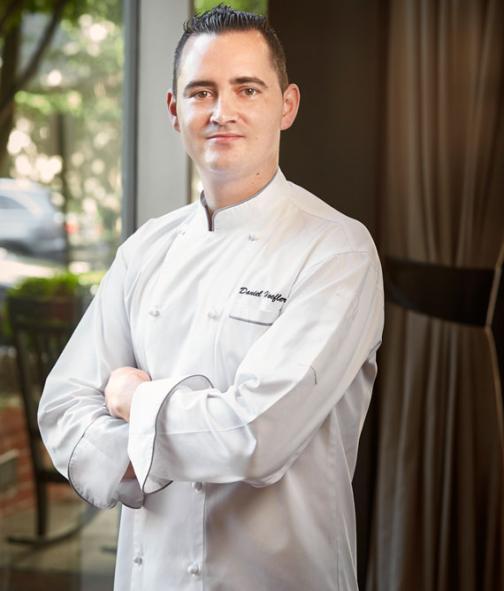 Upon graduation, Hoefler apprenticed at the East Side Hotel in Berlin, and in 2005 worked as commis de cuisine at the four-star Van der Valk Hotel in Berlin. Two years later, Hoefler joined the five-star Grand Hyatt Berlin, where he was responsible for orchestrating high-level banquets and catering for heads of state, as well as leading the Mesa and Tizian restaurants, two fine dining restaurants boasting European style.  Hoefler was promoted to sous chef during his five-year tenure.

In 2012, Hoefler relocated to the United Arab Emirates to serve as a sous chef at Traiteur, Park Hyatt Dubai's award-winning restaurant, quickly rising to chef de cuisine in 2013.  Traiteur's classic French bistro cuisine appealed to Hoefler's belief that the dining experience is as much a feast for the eyes as it is for the palate.

Prior to joining Blue Duck Tavern, Chef Hoefler held the position as chef de cuisine of NoMI Kitchen for 18 months. Here he demonstrated his passion for collaborating with local Midwestern producers and farms, and upheld NoMI Kitchen's culture and commitment for its French-inspired American cuisine.

Fans of the Michelin-starred restaurant will have the opportunity to meet Daniel Hoefler and sample his new seasonal creations (not on the current menu) when they reserve the 12-seat communal Chef's Table in Blue Duck Tavern's garden terrace.  Available on the last Friday of every month, only two dinners remain this season on Friday, August 25 and Friday, September 29.  This group dining experience echoes back to the restaurant's motto, gather and celebrate, by creating an experience where guests come together as a community through sharing a meal. Priced at $125 per person (tax and gratuity not included), guests will enjoy a three-course family-style Chef's Table dinner with multiple dishes per course, along with beverages, including seasonal cocktails and wine for the table. Reservations are required and are limited to parties of one to four guests.