Since 1967, Chef-Mate has partnered with operators to menu unmatched taste and quality with Country Sausage Gravy, Basic Cheddar Cheese Sauce, and other premium gravies, sauces, and chilis. In honor of Chef-Mate’s golden anniversary, Nestlé is offering operators the chance to win a golden beach giveaway to one of five beaches or instantly win an essential kitchen tool. 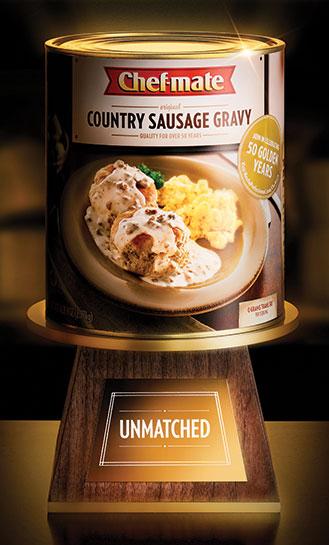 Nestlé will give away a beach trip and kitchen tools in its 50th anniversary promotion.

To enter, operators need to submit an entry code found on limited-time golden cans of Chef-Mate Country Sausage Gravy. One grand prize winner will receive a trip to one of five golden beach destinations: Honolulu, Hawaii; Sanibel Island, Fla.; Coronado, Calif.; Myrtle Beach, S.C.; or Cape Cod, Massachusetts. The prize package includes standard airfare, standard hotel accommodations, and a $1,000 gift card. In addition to the grand prize winner, some entrants will be instant winners of an essential kitchen tool after online entry. Grand prize entries will be accepted through December 31, 2017 and instant win entries will be accepted through March 31, 2018.

For complete contest rules and details, or to learn how to receive a free code visit chefmategolden.brandmovers.co.