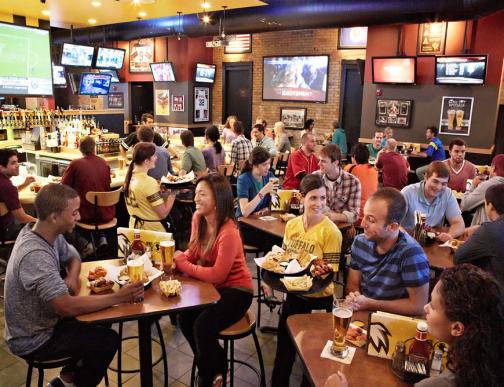 Now in its fourth year, Buffalo Wild Wings has donated and raised over $6.7 million through its Team Up for Kids mission.

Support from Buffalo Wild Wings funds Boys & Girls Clubs of America's ALL STARS, the leading team sports program hosted at hundreds of local Clubs around the country. The donations help train coaches and provide uniforms and equipment to young athletes, and change the game for many kids and teens, giving them the opportunity to play team sports at their local Club and learn skills that will help them grow into productive, caring and responsible citizens.

Now in its fourth year, Buffalo Wild Wings has donated and raised over $6.7 million through its Team Up for Kids mission for its partnership with Boys & Girls Clubs of America to support ALL STARS grants for hundreds of flag or tackle football, basketball, cheer, and dance teams at Clubs across the country.

"Buffalo Wild Wings understands that belonging to a team early on is an opportunity for young people to learn critical life skills and values," says Jennifer Bateman, national vice president of program, training and youth development with Boys & Girls Clubs of America. "By supporting our sports programs and facility improvements, the ALL STARS and Team Up for Kids grants are helping kids and teens build self-confidence and life-enhancing skills that will help them succeed on and off the field."

In 2016, Boys & Girls Clubs of America's partnership with Buffalo Wild Wings is enabling more than 74,000 kids and teens to participate on teams through ALL STARS.  The company also awarded Team Up for Kids grants to 20 Clubs across the country to improve their sports facilities. In total, Buffalo Wild Wings has committed to donating an additional $10 million to Boys & Girls Clubs of America through 2020.

"Our entire system of company-owned and franchised restaurants partnered together with our Guests for another great Team Up for Kids fundraiser that exceeded our expectations," says Emily Decker, senior vice-president and general counsel of Buffalo Wild Wings. "The success of this fundraiser brings us another step closer to our goal of reaching 450,000 kids and teens by 2020 by providing year-round team sports opportunities."