Although restaurant traffic declined for the seventh consecutive quarter in the first quarter of 2010, the rate of visit losses began to ease compared to steeper declines in previous quarters, according to The NPD Group, a leading market research company.

Consistent with the easing of commercial restaurant traffic declines, NPD’s SalesTrac Weekly, which measures same store sales trends for 47 of the largest quick-service restaurant and family-style chains, reported an increase in same-store sales for March and April 2010, following declines over year-ago for the prior nine months.

According to NPD’s Crest, which continually tracks consumer usage of foodservice, all segments of the industry experienced traffic losses in the quarter with quick serves (down 2 percent) continuing to hold up slightly better than midscale (down 4 percent), casual dining restaurants (down 3 percent), and fine dining/upscale hotel (down 6 percent). The quick-serve pizza category driven by aggressive marketing programs, led all categories in growing dollars and traffic, a turnaround that occurred after 12 consecutive quarters of declining customer counts. 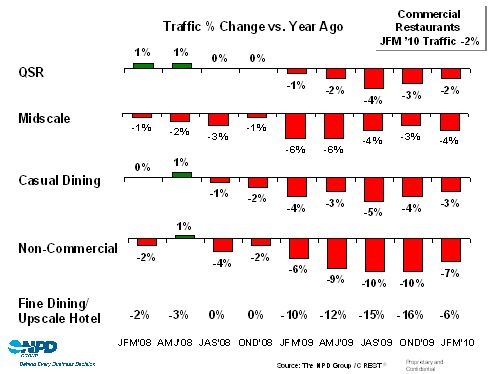 The morning meal daypart at commercial restaurants was one of the bright spots in the quarter with traffic flat compared to a year ago. Traffic at dinner, which has been slipping since 2006, declined by 4 percent and visits at lunch were down by 2 percent.

At non-commercial foodservice outlets, traffic declines eased slightly this quarter, though traffic is still 7 percent below year ago levels for the quarter ending March 2010, according to NPD’s Crest OnSite, which tracks usage of foodservice at business and industry, secondary schools, colleges and universities, hospitals, lodging, recreation, senior care, military, and vending segments. Losses at lodging showed marked improvement this quarter with traffic volume just 3 percent below year ago levels. Secondary school was the strongest segment this quarter matching year-ago traffic levels. Sectors most affected by the economy and high unemployment, such as business and industry and vending, posted the steepest declines.

“There are signs of improvement but the industry isn’t out of the woods yet, and won’t be until the economy stabilizes, the unemployment picture improves, and consumer confidence maintains positive momentum,” says Bonnie Riggs, NPD’s restaurant industry analyst. “Our foodservice forecast suggests there will be two more quarters of traffic weakness before the industry recovers traffic losses.”