Applications for new businesses in the U.S. from June 2020 to May increased at the greatest pace on record since 2004, according to the National Bureau of Economic Research.

Most of the new business openings are coming in the South.

Nearly 20,000 restaurants and food businesses opened in the second quarter, according to Yelp data, a sign that confidence is growing among industry operators.

Applications for new businesses in the U.S. from June 2020 to May increased at the greatest pace on record since 2004, according to the National Bureau of Economic Research. Categories accounting for the bulk of the surge include personal services; professional, scientific, and technical services; administrative and support services; truck transportation; and accommodation and food services. 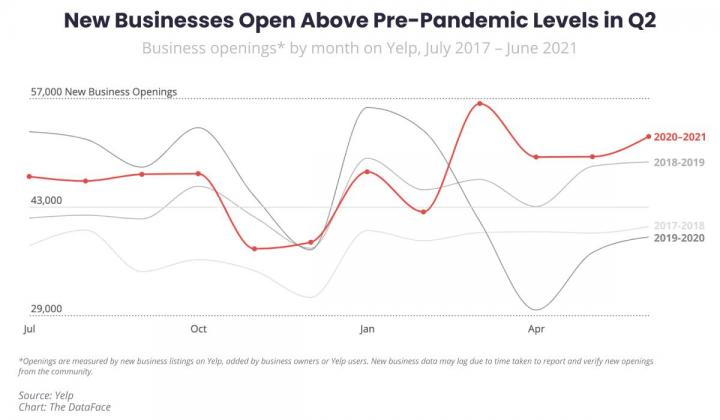 Although restaurants are reopening at a huge pace, trends established during the industry—such as the rise in delivery—haven’t disappeared. The opening of food delivery services (670, up 166 percent) is well above pre-COVID marks. Other areas soaring past pre-pandemic levels in terms of openings are seafood markets (81, up 44 percent), soul food (176, up 30 percent), desserts (1,628, up 47 percent), and food courts (59, up 40 percent). 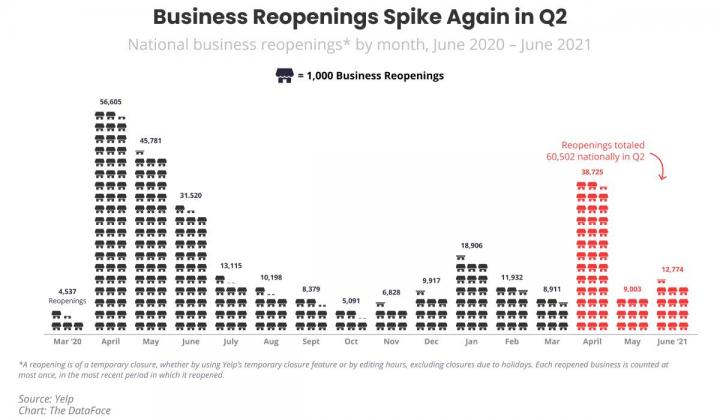 The opening and reopening of restaurants have been met with a wave of pent-up demand from consumers. More than 3.7 million diners were seated in May via Yelp, which is the largest figure the company has ever recorded. The number of diners seated via Yelp in May increased 48 percent compared to 2019. In April, the figure surged 46 percent compared to two years ago. Also, consumer interest in restaurants returned to 86 percent of 2019 levels from March to May after a significant drop in the year-ago period.

Data from Zenreach backs up Yelp’s findings. The company said nationwide restaurant foot traffic has increased 57 percent since the start of 2021. Megan Wintersteen, vice president of marketing for Zenreach, said it wouldn’t surprise her if the growth improved to 65 percent within the next three months. The markets with the biggest leap in foot traffic since January are San Jose (192 percent), San Diego (173.7 percent), Los Angeles (161.2 percent), Denver (151 percent), and New York City (132.5 percent).

However, many restaurants have been unable to truly reap the benefits of the growing traffic due to the ongoing labor crisis. In April, there were 9.3 million job openings in the U.S., a record-high for the Bureau of Labor Statistic’s Job Openings and Labor Turnover Survey. In May, openings dipped slightly to 9.2 million. Last month, the industry added 194,300 jobs, but restaurants are still 1.3 million short of February 2020's total workforce.