People are searching for restaurants at a record clip.

In Which Cities are Restaurants Recovering the Fastest?

Some markets are recovering faster than others, but overall signs are positive.

One of the (many) unusual ticks of COVID-19 was that restaurants, generally, did not suffer at the hands of depressed demand. While there was surely some hesitancy to eat out from consumers, it was often washed over by the opposite camp—people eager to rush out once they could. This was evident over the summer, and it’s clear now, with Black Box Intelligence reporting positive two-year sales in nine of 11 regions during the week that ended April 4. Where did sales run negative? In California and New England, markets hindered by capacity restrictions.

Essentially, when restaurants are allowed to open, customers come back.

According to a new survey from SlickText, 49 percent of more than 1,000 respondents said they’ve already dined at a restaurant. Only 10 percent plan to wait six months or longer before doing so.

It’s one of the common “when I get vaccinated” boxes to check for people, especially in terms of dipping their toe in the social waters again. Say, a safer option than travel. SlickText’s study showed 25 percent of New York respondents expected to wait at least six months before flying.

Beyond the safety hurdles, restaurants can slide into a role they played long before COVID—the reason many often termed the sector “recession proof.” (It’s not disaster proof, as coronavirus and other events, like hurricanes, prove). This notion consumers take extra spending money and use it to dine out, or fork up funds for experience. Something that’s more wallet-friendly than booking a family vacation.

A previous study by Harris Group noted 72 percent of millennials would rather spend on experiences than material items. The “reactance theory” suggests this will only grow stronger when the pandemic fades.

If you want to narrow this down to something more tangible, just look at the recent round of stimulus checks. According to Rabobank and Earnest Research, the latest infusion could ultimately lift restaurant sales by 20–30 percent—a boost backed anecdotally by many chains in recent weeks.

While most of the respondents in a Sense360 survey said they would use stimulus on essentials, one out of 20 said they’d deploy the check for “non-essential shopping.”

Chipotle CEO Brian Niccol, whose chain witnessed sales track in the negative high-teens range in a recent quarterly report, credited fatigue in home cooking, as well as people running out of stocked-up food stores, for the brand’s uptick. Also, he noted the arrival of stimulus checks and tax refunds for many Americans and their decision to use that money to break up the monotony of quarantine life.

Again, it aligns with historic trends. Restaurants have always provided a cost-effective outlet during difficult times. It’s a way people can treat themselves without breaking the bank. They just weren’t allowed to during COVID.

Rabobank found that following the first two stimulus checks, restaurant sales increased by low-double digits in the following four weeks. The company said it expects the latest checks to have a much larger and uniform impact on the restaurant sector for several reasons:

In terms of where the greatest impact will be felt, we can look to past results, too.

With previous stimulus checks, delivery aggregators’ outperformance became even more stark, as delivery sales growth for stimulus recipients exceeded overall delivery growth by 24 to 50 percentage points during the first stimulus and roughly 20 to 40 percentage during the second, according to Rabobank.

In contrast, stimulus-driven sales trends for fine- and casual-dining restaurants were relatively mixed. Both formats showed no perceptible hike from the first stimulus, likely due to closures, fewer off-premises options, and different income audience, Rabobank said. While both received a bit more lift from the second stimulus as dining rooms reopened, it wasn’t as prominent as it was for most limited-service restaurants.

Interestingly, the impact also varied based on cuisine. Pizza, Mexican, chicken, and burger restaurants showed a 6 to 16 percentage point lift immediately after stimulus. The evidence was less convincing for diners, Italian restaurants, as well as those with a varied menu, likely reflecting lower off-premises exposure compared to the other cohort.

However, Rabobank doesn’t expect similar divergence as we march toward summer.

Firstly, the government estimated nearly $411 billion in direct payments—roughly equal to the previous two stimulus programs combined. So the value lure might not be so relevant.

Also, 12 million jobs were added since last April. The U.S. consumer is likely in better financial shape and keener to spend checks on non-durable discretionary items, including restaurants, Rabobank said.

There are simply more dine-in restaurants today than last time. With restrictions loosening and relief coming, operators are coming back to life. Other, new restaurants are also opening for the first time.

The second stimulus was followed by harsh winter storms in large parts of the country as well. This time, weather is warming and outdoor dining is back in the fold.

In sum, there’s reason to be optimistic from a strictly demand perspective. Staffing and execution is another conversation. But it appears customers will be there.

As of March, restaurants employed more workers than any time since the crisis began at 10.5 million. Yet that’s still about a million fewer employees, year-over-year, and 1.8 million down from February 2020. So there’s still a long way to go.

The volume of searches for restaurant-level keywords was 82 percent higher compared to March 2020, and also substantially above similar searches in the pre-pandemic months of February 2020 (93.9 million searches) and January 2020 (88.8 million).

What this suggests is consumers don’t just want to eat out again—they aren’t entirely sure where they can eat out. The discovery process has taken on new meaning. People want to check before they leave the house, everything from hours to options (dine-in, outdoor seating, etc.) to COVID protocols. While a restaurant’s review listing and website were always critical, it’s even more so the case now.

And here’s another positive spin for restaurants: Searches for recipes, which skyrocketed during COVID, have cooled off. March registered the lowest number of recipe searches in the past six months. Restaurants are starting to take share back from at-home preference.

This record growth in restaurant-related searches has not distributed evenly. Southern cities and top tourist spots, like Miami, Las Vegas, and Virginia Beach, lead the charts, while places like New York, San Francisco, and Washington, D.C., continue to see demand below pre-virus levels.

Again, it’s a sign restrictions are clamping down restaurant sales—not consumers’ willingness to dine out.

Chef’s Pencil analyzed search volumes across the country’s 50 largest cities to see where demand was highest and lowest compared to life before coronavirus. It compared restaurant-related searches from March 2021 to January 2020.

Here were the results. 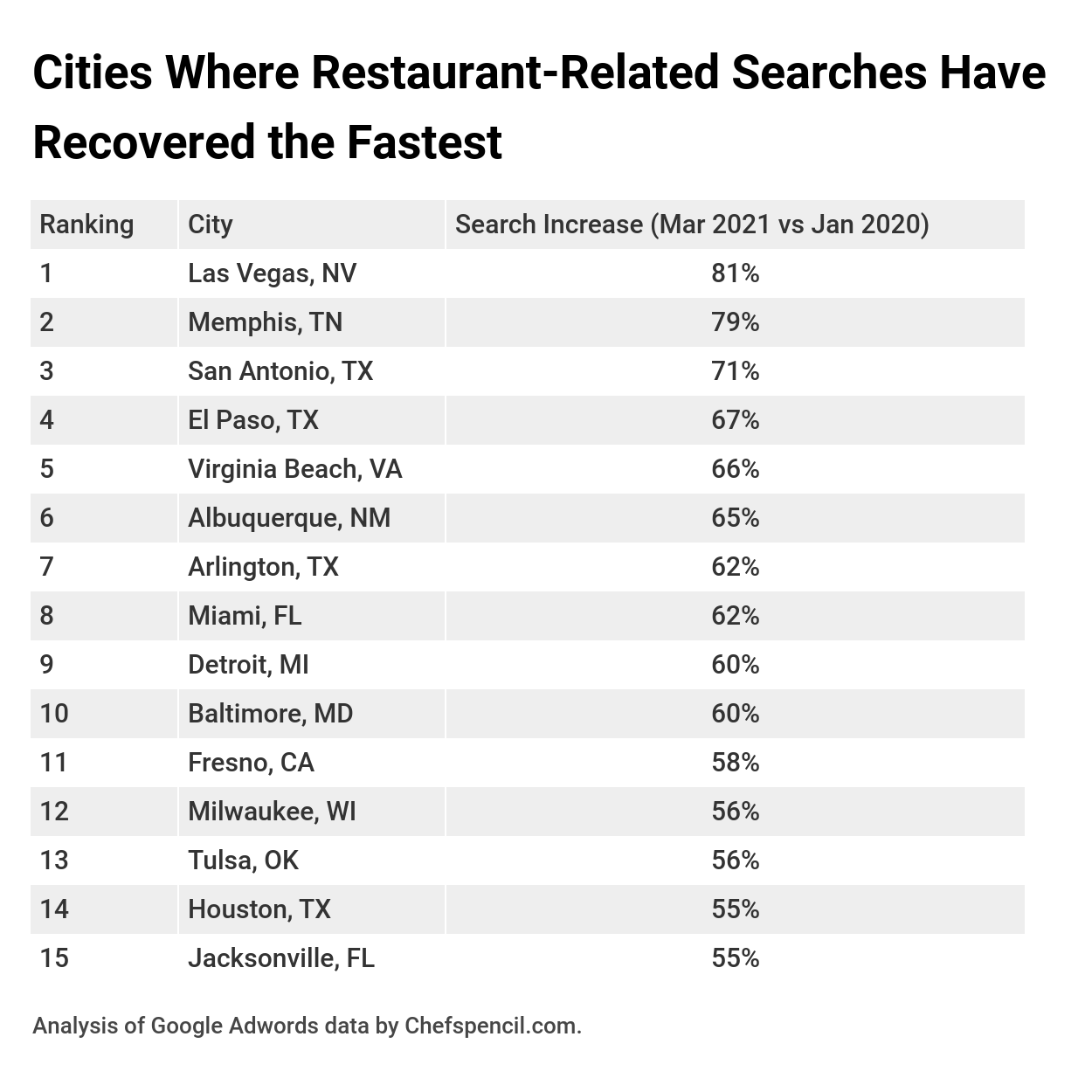 Nevada reopened restaurants, casinos, and bars at 50 percent capacity in mid-March. The boom was quickly on. Restaurant-related searches on Google soared 148 percent, year-over-year, in Las Vegas, and 79 and 81 percent, respectively, compared to the pre-pandemic months of February 2020 and January 2020.

Mexican food/restaurant searches were the most popular in the category, followed by fast food, Chinese restaurants, and steakhouse searches.

Texas fully reopened in early March and recovery ignited. San Antonio (No. 3) and El Paso (No. 4) cracked the top five.

More than a million restaurant-related searches were done in March 2021 in San Antonio alone—a 108 percent year-over-year hike, and 71 percent up from January 2020.

To the earlier point, however, this rush hasn’t helped the labor challenge. It does the opposite. In some places, customers had to order food at the counter to let servers focus on distributing drinks, while in others restaurant owners decided to serve fewer customers and lose out potential sales in order to maintain service quality, Chef’s Pencil said. More on that reality here.

Not all restaurant-related searches were for dine-in concepts. Drive-thrus for coffee, pizza, and fast-food proved particularly popular in Albuquerque, and was backed by a recent story talking about traffic congestion.

As much as restaurant goers are looking for ways back into restaurants, they’re going to keep turning to off-premises channels as well. Some might stick there for good. Others will likely just add it to their occasion set now that they’ve experienced the convenience and crossed the adoption gap.

For quick-serves, this is surely a more prominent and lasting point than it is for sit-down brands.

In a recent report from website, e-commerce, and marketing company BentoBox, nearly eight in 10 (79 percent) current delivery/takeout customers said they would continue to order at the same frequency they do now. They credited vaccine eligibility (25 percent), hesitancy to resume normal dining habits (34 percent), and convenience (74 percent).

While those first two points are fluid, the third is not going anywhere.

The other side of the conversation

Clear from this chart below, markets with tighter restrictions have proved tougher sledding. Places like Washington, D.C., didn’t just have a pandemic to deal with, either, but also faced protests, inauguration-related events, and more external things restaurants couldn’t control. 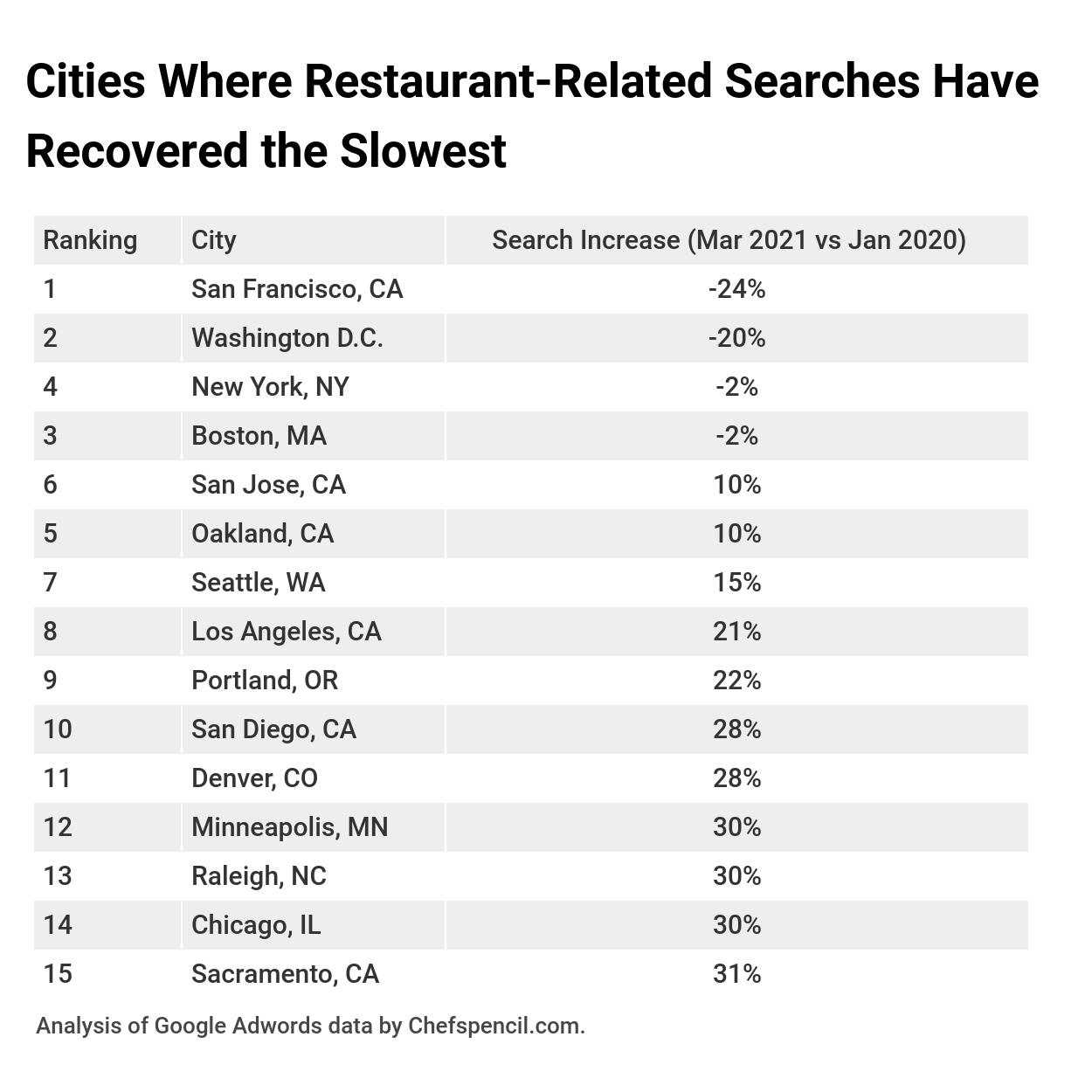 Employment for the restaurant industry was down nearly 54 percent locally.

And twice as many concepts shut permanently compared to pre-virus days. Positively, March 2021 saw the highest number of restaurant-related searches since the start of the pandemic.

Cities with the Highest Interest in Eating Out
Infogram