Black Box said restaurant sentiment online is starting to show heightened attention by guests to coronavirus related to food safety and cleanliness, as well as more concepts paying attention to signs of sickness among staff members

Where is the Coronavirus Hitting the Hardest? Full-Service Restaurants

Some brands are even taking away tables just to ease contact concerns.

Early day impacts from the coronavirus outbreak are starting to show for restaurant operators. Industry insights platform Black Box Intelligence released Wednesday a special update outlining some of COVID-19’s effect so far. It’s the first of what Black Box said will be weekly snapshots monitoring the situation. The next is planned for March 17.

Here are some key insights:

In the market where the first major outbreak was reported (Seattle), restaurant sales dropped 10 percent during the first week. However, the figure only factors in a day or two of heightened public awareness. Black Box said real impact is expected to be north of 20 percent in lost restaurant sales after one full week.

Who’s getting hit the hardest? To date, it’s been full-service restaurants in Washington. Upscale concepts even more so.

This isn’t overly surprisingly as many restaurants have already reported a downturn in foot traffic. Hotel restaurants and catering companies are being hammered, according to Eater. Restaurateur Tom Colicchio told the publication his company’s revenue is down as much as 70 percent between event cancellations and slow hotel business. Nonprofit the NYC Hospitality Alliance added there’s been “a big drop” in business and private event cancellations.

How should your brand prepare for the coronavirus?

Why February was a lull before the storm for restaurants

Also in the article, Michael Sinensky, founder of hospitality group Simple Venue, said his restaurants, which rely heavily on traffic from tourists and corporate lunches, have seen sales fall as much as 25 percent.

One unique coronavirus-related issue with sit-down brands is visit duration. Customers today are more conscious of staying out for extended periods of time. So sit-down brands are seeing guests dine for shorter stretches. It’s also boosting dine-in and delivery, with aggregators, like Postmates, rolling out contactless options.

Black Box’s data shows restaurant spending shifting away from full-service units to quick-service brands, at least initially. To the earlier point, there has been an increase in to-go sales in the first market affected. Average to-go sales by restaurant locations jumped 10.5 percent in Seattle during the week ending March 1. Black Box said these shifts appear to indicate that, as concerns for coronavirus continue to rise, guests will likely favor quicker or off-premises dining experiences versus extended sit-down meals where they interact with servers and sit among other guests.

Michelin-starred Plumed Horse, per SFGATE, dropped 60 percent of its tables to give diners more space. The venue, where diners average two-and-half-hour experiences, cut back from 36 tables to 15, which ensures a minimum distance of at least 6 feet between parties. Italy has instructed restaurants to keep patrons at least 3 feet apart.

This concern could be especially pronounced in crowded urban restaurants and food halls in the coming weeks. 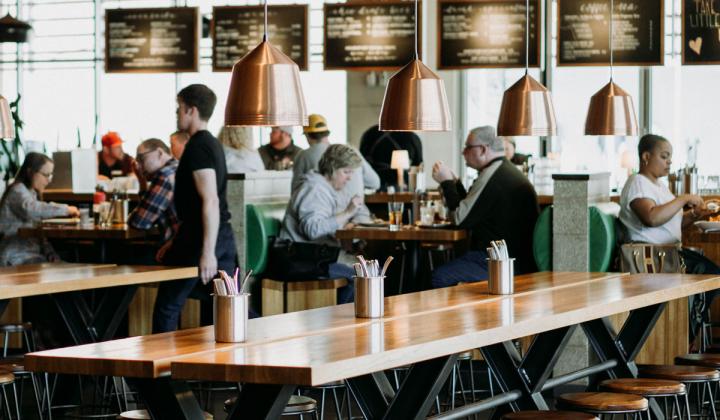 Giving guests some space might be a good strategy, despite the hit in sales.

In Seattle, restaurant spending from guests 65 years and old fell “very significantly,” Black Box said, compared with their spending in the rest of the country during the week. Given where the coronavirus is making the most-severe impact, this isn’t likely to change anytime soon.

Building on the consumer preference shift resulting from coronavirus concerns, Black Box data revealed that online grocery and meal kits saw strong year-over-year growth in spending at the end of February. It could signal an upcoming trend, the company said, as consumers move more of their share-of-stomach spending toward options that allow them to avoid contact with other people, while also giving them more control over food preparation and hygiene.

What’s also worth taking into consideration is how many people are being mandated by employers to stay at home. And simply those who don’t want to brave the crowds. Meal kits and online grocers combine two rising behaviors in light of the outbreak—the ability to get food delivered; and actually cooking meals and not worrying about potentially infected restaurant workers handling the preparation.

Black Box said restaurant sentiment online is starting to show heightened attention by guests to coronavirus related to food safety and cleanliness, as well as more concepts paying attention to signs of sickness among staff members. Starbucks and McDonald’s are among the brands ramping up cleanliness policies.

Starbucks, according to a memo reviewed by The Wall Street Journal, told employees to clean cafes and bathrooms more often, and to regularly wash their hands. The chain said its more intensive cleaning regimen should take roughly 30 minutes per day and be performed during peak times. It recommended managers add up to 1 percent of their planned employee hours to shoulder the work. Starbucks added employees should stay home if they’re sick, keep their fingernails short, and limit the amount of jewelry they wear.

The java giant, which offers paid sick leave for workers and has restricted all business-related travel through March 31, is also no longer allowing customers to bring in their own cups for refills. If they do so, Starbucks will give them a 10-cent discount as a courtesy, but still serve the beverage in a new cup.

McDonald’s created an internal group in January to assess the daily impact of coronavirus on its global operations. It said Tuesday that it will pay hourly employees at U.S. company-owned units who have to quarantine for 14 days.

“Initial areas of concern for restaurant sales decline due to the outbreak include cities and states with rapidly number of confirmed coronavirus cases, markets that are popular destinations for international travelers, markets that are hosts to large events such as conferences and trade shows,” Black Box added in its special update.

The company noted that it’s still hard to predict what the pattern and speed of expansion of coronavirus will look like in the U.S. Also, what measures will need to be taken to slow its rate of spreading. But despite those uncertainties, it’s clear multiple factors will have deep implications on restaurant performance throughout 2020.

From a national perspective, Black Box said, favorable winter weather will likely mask some of the negative effect in year-over-year sales growing in coming weeks. What is expected, though, are sharp drops in restaurant sales specific to those markets in which major outbreaks occurred by the first week of March. San Francisco is one area where the downturn could flash, Black Box said, particularly in terms of lost sales for full-service restaurants. For those brands strongly positioned in off-premises offerings, it’s probable to-go, delivery, and drive thru will witness an uptick.

In cities where major events are being cancelled (Austin, Texas, for SXSW, for example), expect a sizable drop in comps and traffic as well.

“At the national level it will probably take a few weeks before there is a meaningful erosion in restaurant sales, but that could change rapidly if panic accelerates and consumer confidence drops quickly,” Black Box said.

The reason for this might be more notable than the expected market volatility itself. As Sentieo pointed out, restaurants, like the hard-hit travel industry, are consumer discretionary stocks. They compete with food at home. Movement restrictions in the near-term could result not just in reduced business, but zero business for some.

Additionally, restaurants are broadly low-margin businesses. Meaning a small drop in revenue hurts the bottom line disproportionately to other sectors. Just look at the impact inclement weather typically has on restaurant performance. Or hurricanes.

Sentieo added that, even if locations stay open, supply chain disruptions could result in inventory running out in a short time, which would also lead to no sales.

Nick Mazing, director of research at financial data firm Sentieo, told The Wall Street Journal, “This is a bona fide force majeure, and franchisors should be communicating plans to relieve the pressure from franchisees over the next two to three months.” His suggestions: delaying required spending, reductions in royalty fees owed to the parent company or menu or store-hour modifications based on local conditions.

Regardless of where you start looking, however, the global slowdown in economic activity, coupled with the possibility of the coronavirus outbreak directly hurting restaurants on a wide scale, will undeniably inject strong concerns into an industry that was already grappling with declining guest counts (traffic dropped 3.1 percent industrywide in 2019, year-over-year).

“In this new landscape, flat same-store sales for the year may be the new best-case scenario and declining sales a likely outcome,” Black Box said.