Local restaurants are finding success on the weekends and holidays. But where exactly might surprise you.

Where and When Local Restaurants Can Win

Following the spending habits of consumers.

According to The NPD Group, there were more than 460 billion in- and away-from home eating and drinking occasions in 2018. And it’s been well documented where the shift is taking place. Restaurant visits from 2014–2018 declined by more than 700 million, per NPD, while 14 percent of in-home occasions included at least one item that required no preparation, up from 11 percent. So what that tells us, dressed down, is the prepared and convenience-centric space, whether through delivery, take-out, grocer or C-store, has disrupted restaurant traffic.

In a June report from NPD, the company noted that restaurant digital orders, defined by meals or snacks ordered via mobile app, internet, or text message, rose 23 percent over the past four years and now represent 3.1 billion visits and $26.8 billion. The firm expects that figure to grow by double-digits through 2020 across all channels, including delivery, on-premises, and carryout.

Customers continue to gravitate to digital orders for reasons beyond simple convenience. In NPD’s survey, guests cited no waiting; the ability to order, pay, and have it ready; ordering at my “own” pace; and earning rewards/feeling valued. Additionally, mobile apps represented 60 percent of digital orders, and customers flocked to them for savings, customization, and rewards.

The market-share battle is simply being fought on new fronts these days. There are fewer customers to compete for in terms of dine-in traffic, but the outlets to buy food are expanding.

In five years, the midscale/family dining full-service category has lost 500 million visits, NPD said in July. The casual-dining segment has held steady as of late, however, after four years of declines.

This multi-tier dynamic, where guest counts aren’t robust, might just be the new normal for many restaurants. But NPD’s data suggests it’s leveling out. Thanks, in part, to off-premises expansion and higher checks, in and outside the restaurant.

According to Statista, 34 percent of customers spend at least $50 per order when ordering food online.

Despite all of this, however, it’s worth keeping in mind that dine-in traffic remains the heart of the full-service industry, and always will. Even some of the largest adopters, like Chili’s, glean just 17 percent of their total sales outside the restaurant. And of that, delivery mixes 5 percent.

Data shows that customers who place an online order with a restaurant will visit that venue 67 percent more frequently than those who don’t.

The bottom line being, as digital orders and accessibility boom, execution and four-wall service actually gains in importance; It doesn’t decline. As Darden CEO Gene Lee often touts in response to Olive Garden’s delivery resistance, dine-in business can actually inspire off-premises orders. And that’s a key way to protect the value proposition. It guards against trying to build all of a restaurant’s sales through new digital, third-party customers, which muddies brand equity. Incremental business is great (those customers who weren't dining there otherwise), but trying to completely cover faltering transactions with app-loyal delivery users is likely not a viable strategy long-term. Let the food and experience speak for itself, and then open the points of purchase.

Let’s focus on the local level

For independents, and chains on the ground level, understanding buying trends is always critical, especially with labor costs, staffing, and trying to predict peak business. Womply, a software company serving small businesses, recently released its 2020 State of Local Restaurants Report. By analyzing transaction data from 36,000 local, independent restaurants in all 50 states during every day of 2019, the company took a deep look at when stores are doing the most business, and when they seat the most guests.

"As in years past, our 2020 report reveals that restaurants are a strong and consistent business in local communities nationwide,” says Brad Plothow, VP of marketing and communications at Womply. “In fact, the average weekend provides a better sales bump than most prominent holidays, suggesting that patrons are regularly out in force at local eateries. The state of local restaurants is strong.”

How much do local restaurants make on an average day?

Womply found that restaurants in the U.S. brought in $1,350 in revenue on a typical day. The average restaurant processed about 47 transactions daily while seeing customers spend an average of $28.43 per ticket.

Let’s break it down by state. As you can see below, Vermont’s restaurants brought in the highest average daily revenue at $1,916. Rhode Island led in ticket at $37.20. North Carolina was home to America’s busiest restaurants, processing 66 transactions on an average day. 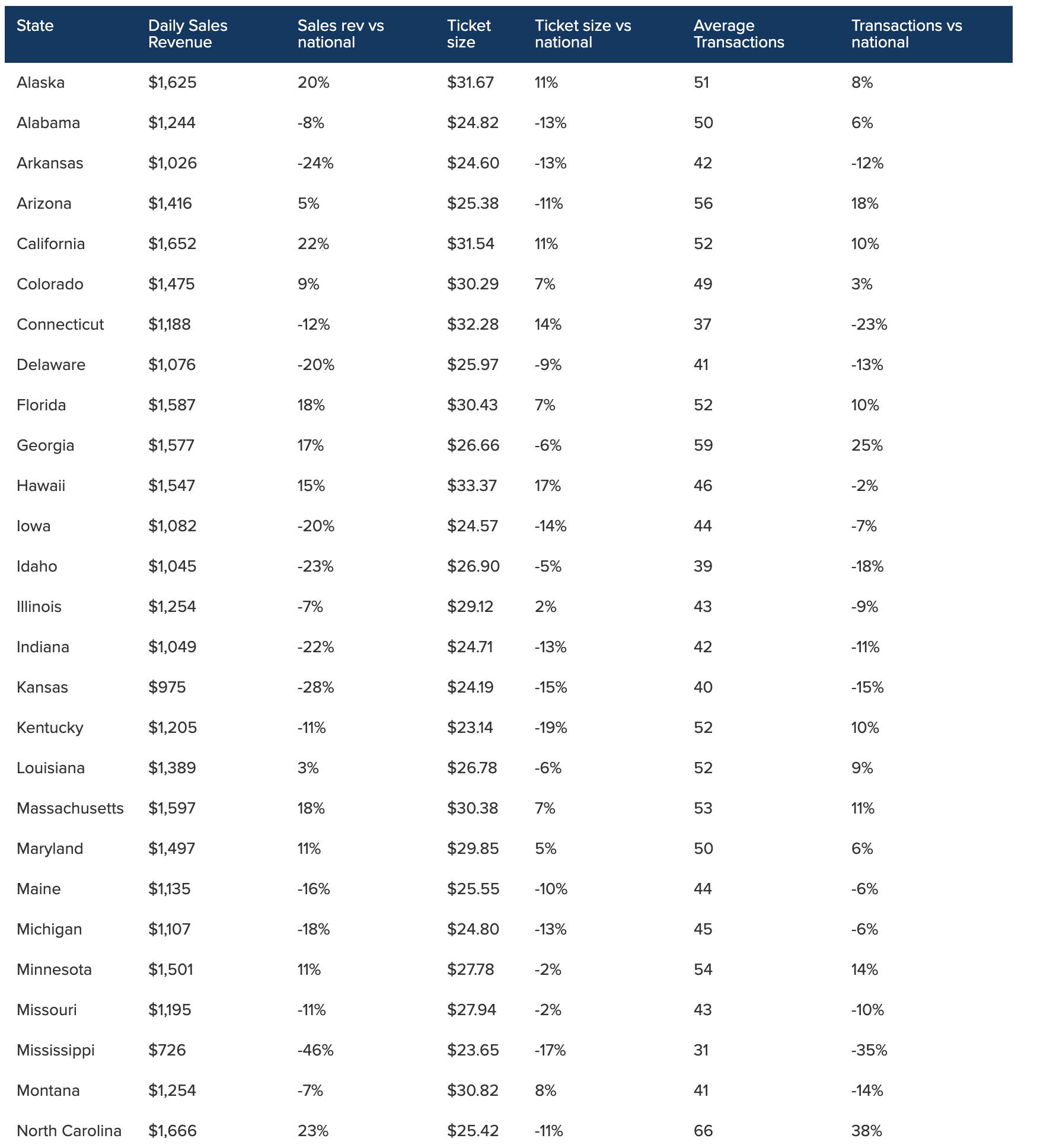 Unsurprisingly, restaurants turned in their best performance on weekends, with a combined total of 54 percent of all average weekly restaurant revenue coming from Friday through Sunday. 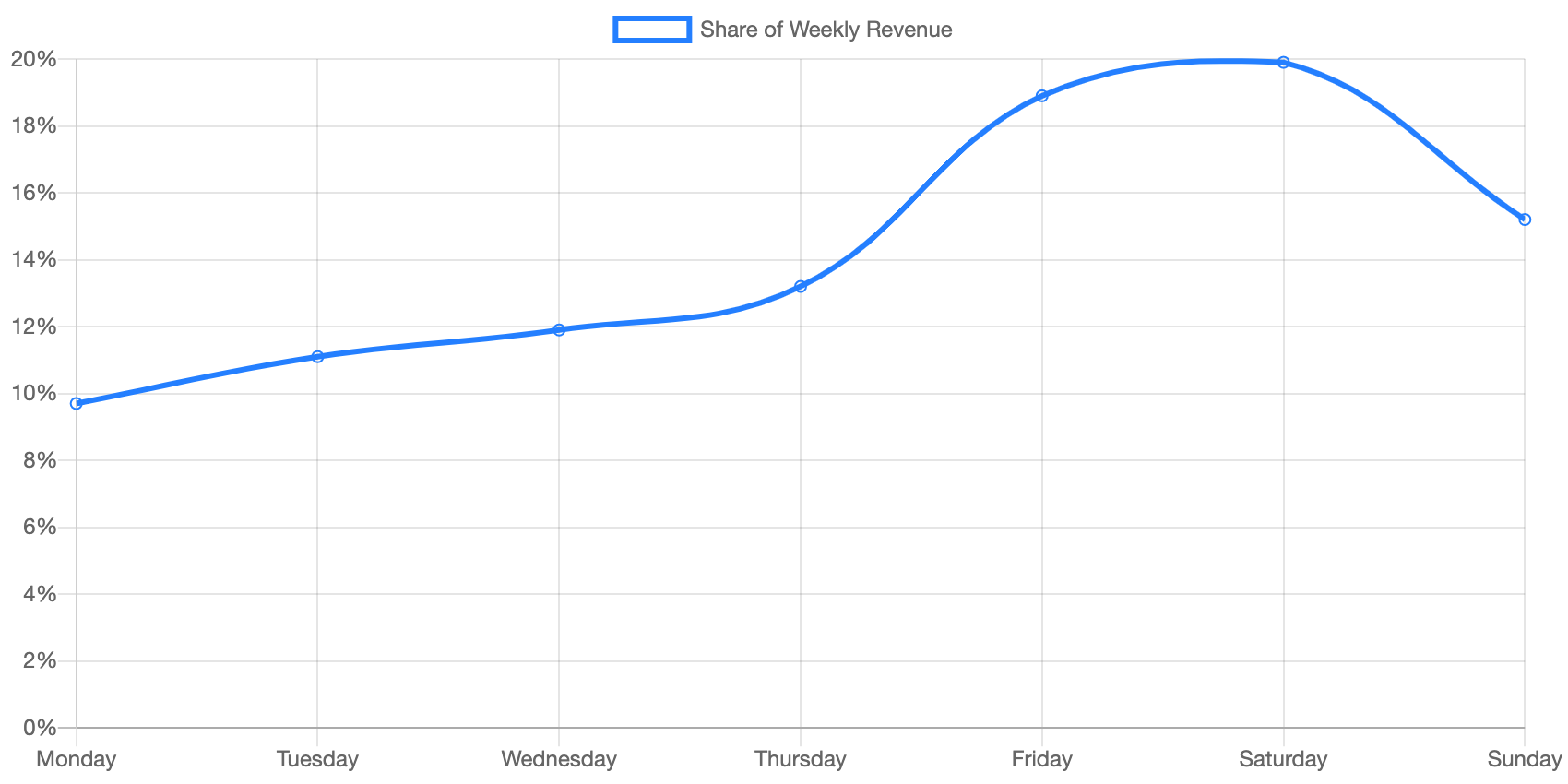 Fridays were the busiest. 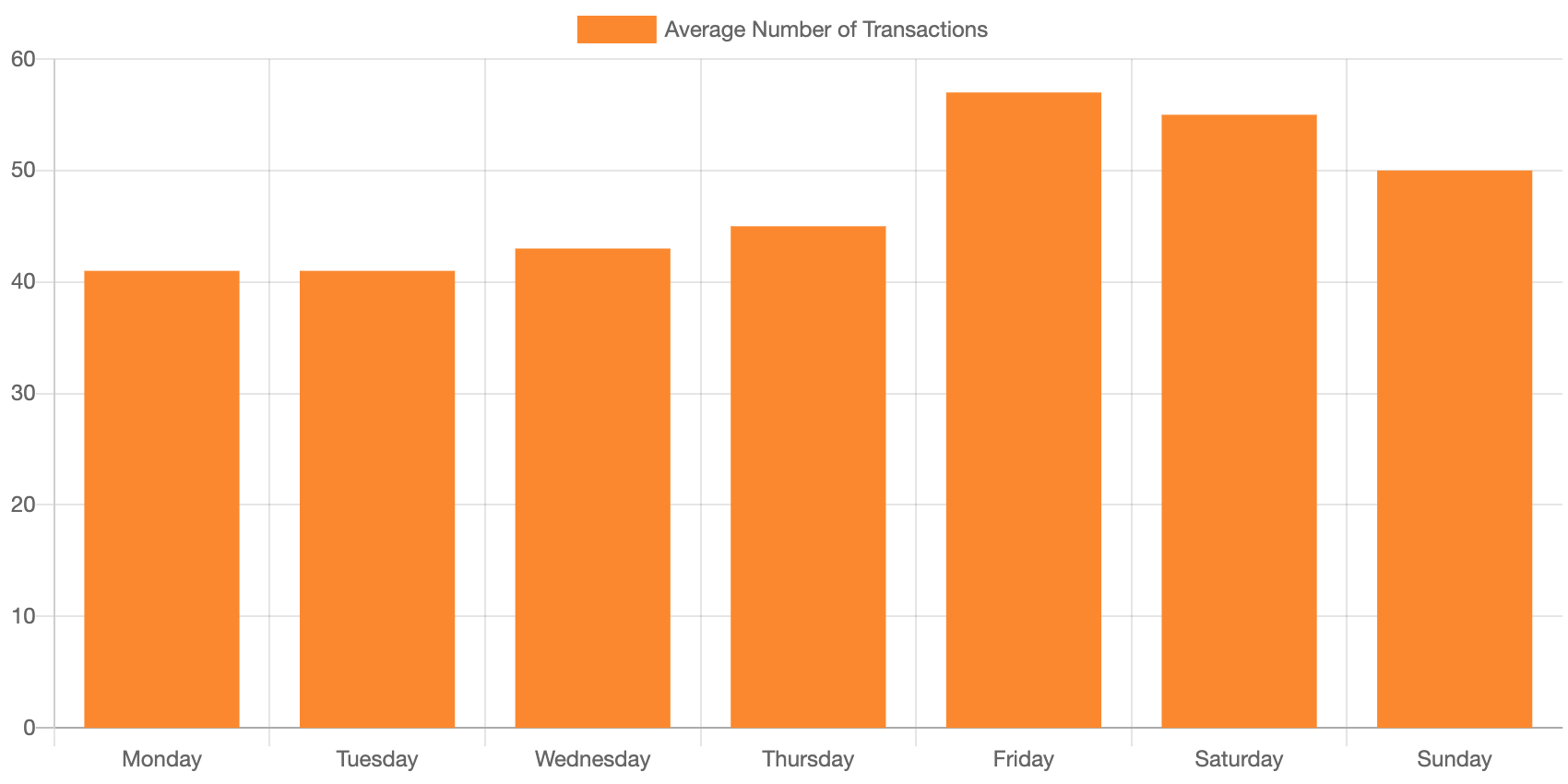 Yet people spend the most on Saturdays and Sundays. 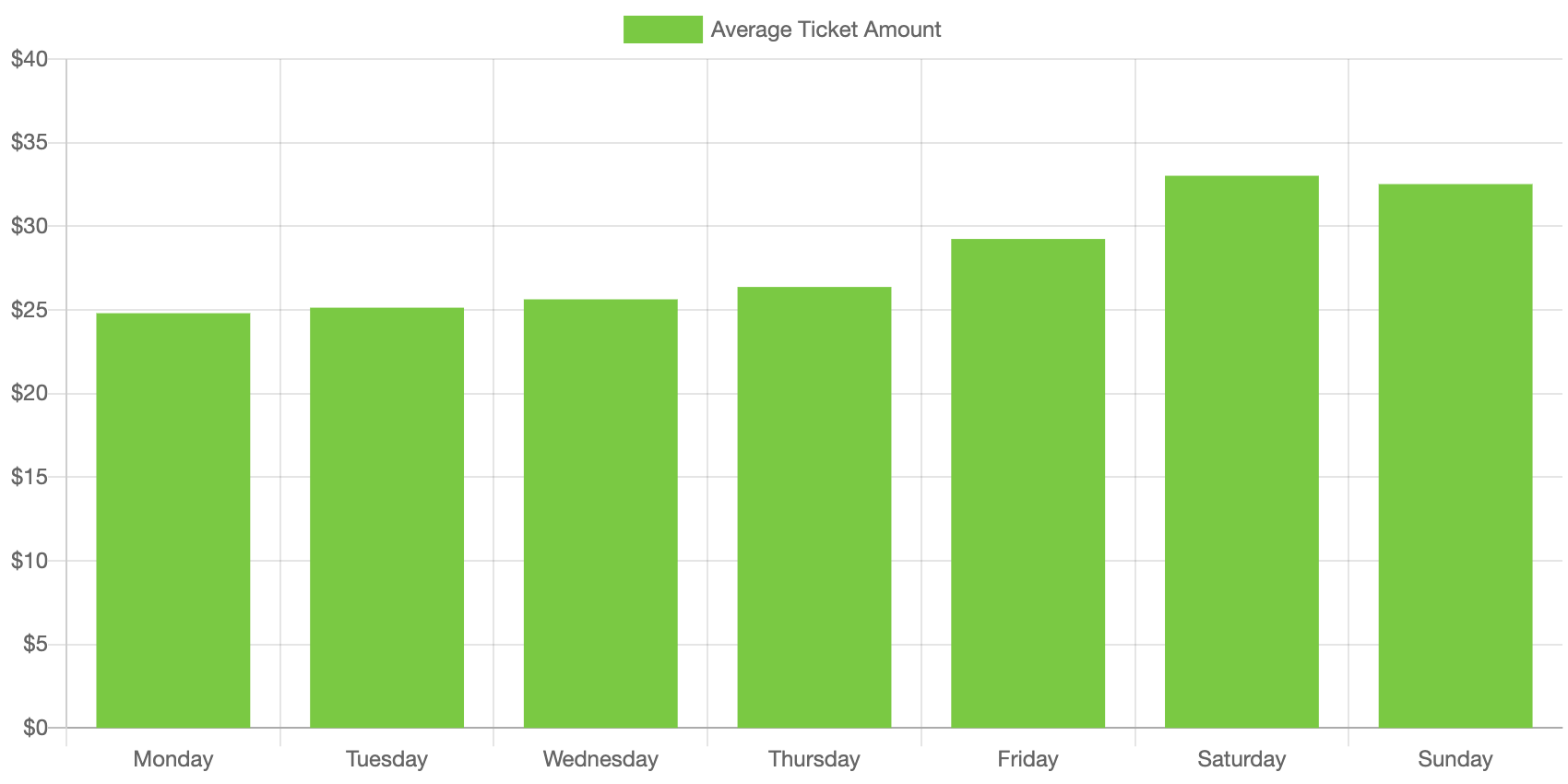 Womply’s data shows a slowdown to start the year (those resolutions) but a pickup in February that stays pretty consistent for a while. There are fall and winter dips and summer peaks. The single-biggest week of the year proved to be June 10–16. May, June, July, and August each accounted for at least 9 percent of total yearly spending. January and February brought in 6.8 and 7.1 percent of total yearly consumer spend, respectively. 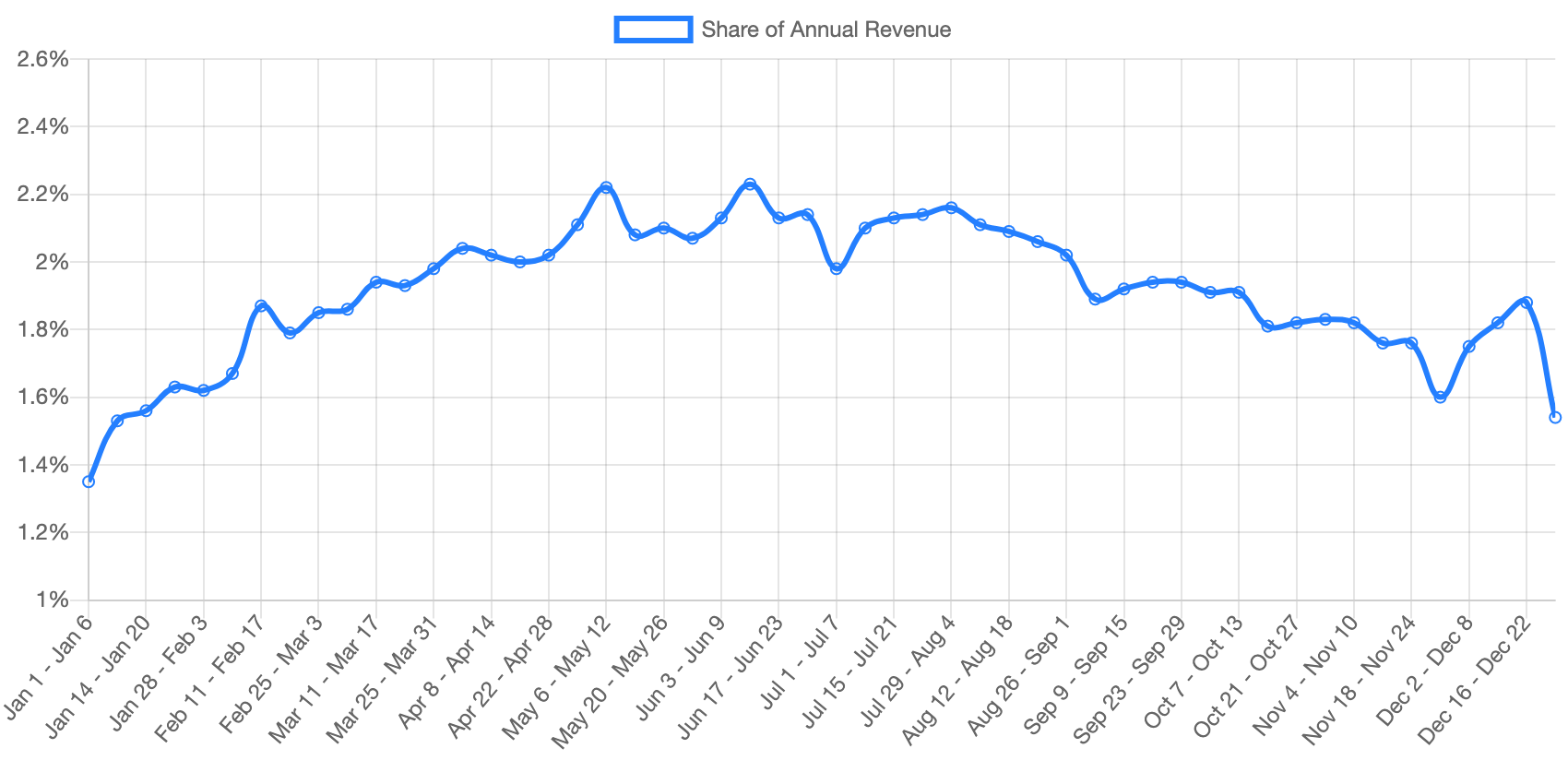 The days that matter (but how much?)

Mother’s Day weekend was so big, by Womply’s calculations, it accounted for the top day of the year for restaurants in 27 states. Enough people went out to eat to generate the No. 1 and No. 2 days of the year during the holiday.

Father’s Day claimed the No. 3 spot.

Here’s a breakdown of some prominent days. 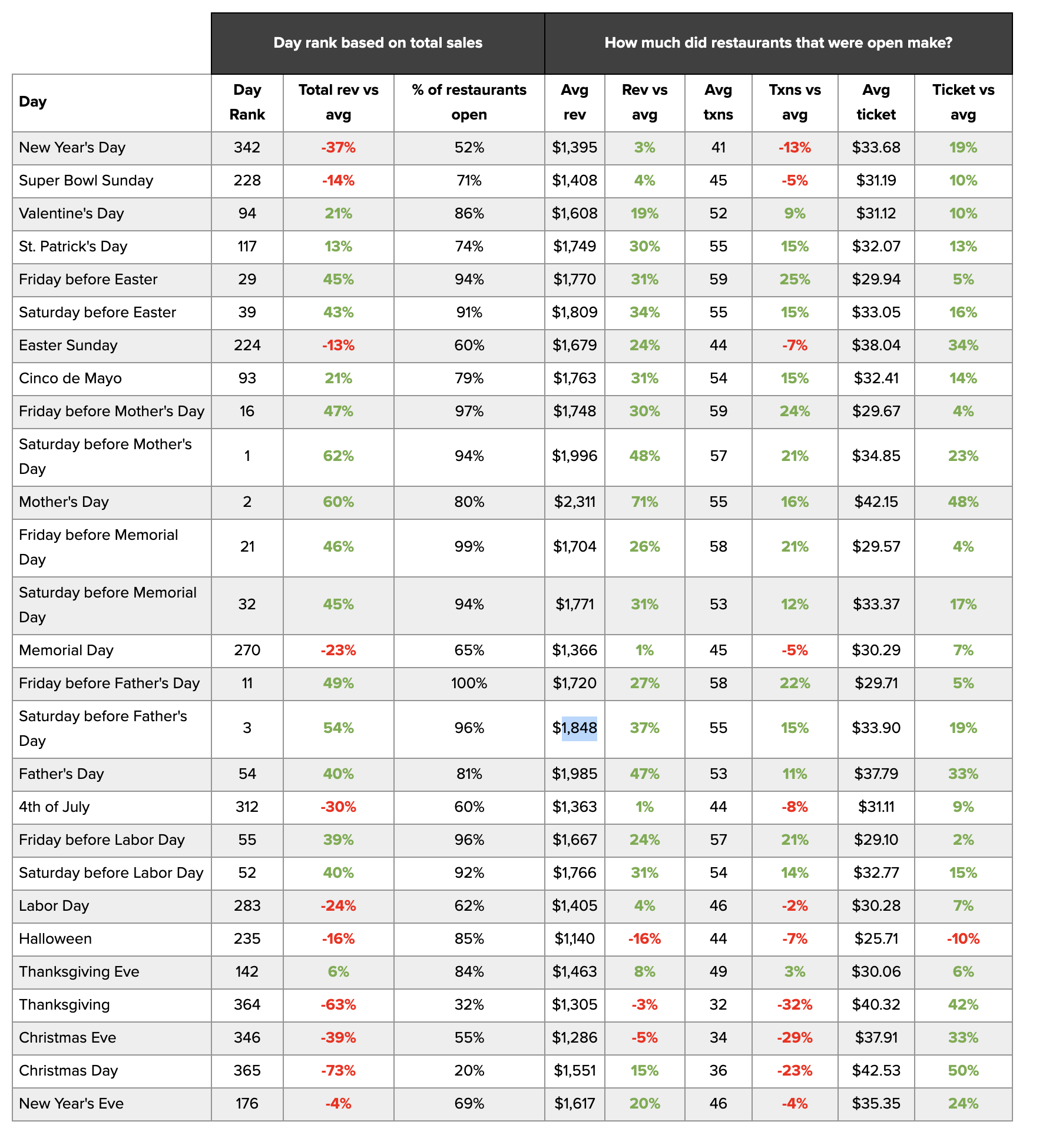 "Nationally, the report revealed highly consistent sales patterns for local restaurants year over year. In general, revenue as a percentage of annual sales is highest when the weather is warmest,” Plothow said. “However, we also uncovered many counterintuitive findings, such as Super Bowl Sunday, Valentine’s Day, and Cinco de Mayo are all fairly average days in terms of consumer spending. This indicates the day of the week is a stronger indicator of how busy your restaurant will be than if it is a prominent day. Consumer spending often defies conventional wisdom, and we want to share these insights to help restaurateurs better understand their customers and run more profitable businesses."

To explain that further, Valentine’s Day actually ranked just 94th out of all 365 days in terms of revenue. Super Bowl Sunday was in the bottom half ore revenue days for the year at No. 228. Cinco de Mayo and St. Patrick’s Day were No. 93, and No. 117, respectively.

In sum, planning for events will always be a big draw for restaurants. You don’t want to miss the dance. But it’s the day-to-day and weekend-to-weekend grind where lasting success takes place.