It's been a rough week for restaurants. But, hopefully, aid is on the way.

Where is All the Restaurant Traffic Going?

And where should your third-party delivery journey begin.

The way consumers react to the coronavirus pandemic is about as dynamic as it gets. As Datassential’s “Fear & Response,” report recently showed, a four-day span is an eternity. In just that short half-week span, the company saw an 8 percent hike in the amount of people saying they were swearing off dining out (for now). Among the 1,000-customer set, the number rose to nearly 30 percent—an alarming figure for an industry already fighting back declining guest counts. The culprit previously: An oversaturated industry that grew too fast (twice the rate of the population) out of the Great Recession.

Today, the issue is compounded across several factors that seem better fit for a SyFy movie. A global virus that keeps people in their homes, away from public gathering places and each other. And officials that continue to mandate shut downs of businesses.

The 30 percent result is a difficult one to grasp and it’s going to cripple many operations, across multiple industries. There’s no other way to view it. And it’s especially daunting for a low-margin, cash flow-tight business like restaurants. Even more so for those that aren’t equipped for off-premises or located in areas where, even if activated, it simply wouldn’t provide enough of a sales boon to offset the dine-in traffic plummet.

In recent days, data platform Sense360 has leveraged its foot traffic, transaction, and survey data to better understand what’s happening and, hopefully, help operators manage their businesses as COVID-19 spreads across the landscape.

Logically, there’s been a dramatic shift as restaurant closures mount and people storm grocery stores. You can see in the following graph just how rapid the increase in share of total food industry visits has been for grocers.

And, as you might imagine, it’s come at the expense of restaurant visits. Casual dining and fast casual appear to have swapped the most share, by Sense360’s data.

In total, grocery stores witnessed a national average increase of 21 percent in share of visits.

Note: Sense360’s Share of Visits is measured as the percent of visits that a brand receives out of all of the visits in the market. It is similar to market share. This metric provides an understanding of the share of visits that are to the brand in question out of all visits to a similar brand.

Sense360 also dove into third-party delivery insights. People are shifting behavior in that direction, either by choice or by mandate. Either way, it’s a battleground picking up pace.

The company analyzed third-party delivery usage in some affected DMAs. The data below can point restaurants to which DMAs to focus on, and which third-party aggregators matter most in each.

Here are some things to keep in mind when looking at the chart.

Spend per Capita: How widely adopted is third-party delivery, based on how much spend the average credit/debit card user is putting toward it?

Estimated Annual Market Spend: When factoring in the size of the DMA, how big is the delivery market overall?

Market Share by Platform: Which delivery platforms are especially dominant / weak in this DMA?

For example, Grubhub/Seamless/Eat25 capture the most market share in New York with 68 percent of consumer transactions. The overall spend in that particular DMA is $2.157 million. And the estimated quarterly spend per capita by New York consumers in $49.81. So, to Sense360’s point, for New York restaurants that have been closed for dine-in, the most impactful delivery platform to partner with might just be Grubhub. 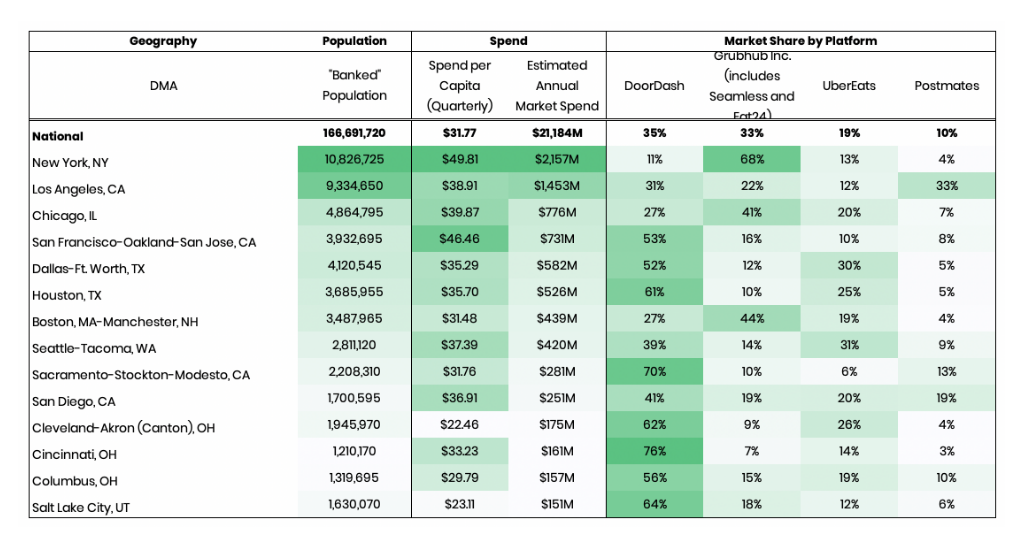 Below is a look at the behaviors people plan to increase/decrease during the coronavirus crisis. This data is a few days old, so the best way to update it would be to take the trends and amplify them. Nothing has really happened lately to subvert consumer concerns. As an industry, restaurants are hopeful aid is coming soon, which is something that’s lifted investor optimism on the stock market. But it’s not something that’s directly influenced diners, at least not yet.

Per Sense360, attitudes really began to shift in the second half of last week as the impact of COVID-19 spread and more states acted. Working from home, online purchases, and delivery all had considerably more mentions as the week progressed. Again, this curve is continuing forward in more recent days.

These are the behaviors people anticipate decreasing.

As the graph below illustrates, the share of consumers not planning to stock up dropped by a third late last week as consumers turned their focus to purchasing household essentials, no-perishables, and cold prevention items, like hand sanitizer.

Just last week, people didn’t think their routines were about to be tossed into a blender. That started to shift later in the week. Older people and those with elderly at home expected the biggest change.

As we know now, it was far more disruptive than we could have imagined.