A social-driven category is finding new life thanks to technology and a changing consumer.

What Will Food Halls Look Like After the Pandemic?

COVID-19 disrupted the category and then forced it to change. What remains? A segment with no shortage of potential.

Traffic at Revival Food Hall in Chicago’s Loop neighborhood hasn’t fully rebounded to its pre-pandemic levels. But people have been steadily returning for office lunches, after-work drinks, and dinners as more workers return to the office and embrace habits of the past.

By March, traffic had nearly doubled over January, when the Omicron variant was spreading across the nation.

“We’re certainly optimistic about it,” says Tim Wickes, director of food hall operations for 16 on Center, which operates more than a dozen restaurants, bars, and music venues.

The hospitality company is so bullish on the post-pandemic potential of food halls it’s opening two more: one in Manhattan’s Chelsea neighborhood and another in The Old Post Office in downtown Chicago.

“More so than ever, folks are yearning for a communal gathering space,” Wickes says. “They want to be around others. They want to see live music. They want to dine out. Just to see those smiling faces back in our food hall again and some of our other concepts around Chicago is special.”

The modern food hall looks nothing like its roots in shopping mall food courts. In recent years, many food halls elevated food and beverage programs to draw in top restaurant brands and chefs. While many were built to foster unique ambiance, nearly all had to pivot to off-premises dining during the pandemic. Like any other restaurant operation, food halls expect that trend to persist.

The draw of a food hall or food court is obvious—the variety. One person in a group can grab a sub sandwich, while another diner picks up an Asian dish. But that generally works best for on-premises purchases.

Now, food halls are working to make all their options available with a single purchase through delivery and carryout, rather than requiring multiple purchases. For Revival, it means a customer can get a salad and a cheeseburger in the same bag by ordering on the company’s app. It’s just part of the brand’s effort to make the food hall experience as flexible as possible.

“We're trying to deliver that all-in-one experience in the app,” Wickes says. “If someone wants quick grab-and-go food, we can provide that. If they want to watch a DJ play on a Wednesday night, they can do that, too. We really do leave it up to our customers.”

“Really, it's a combination of the two. It's virtual brands that we collected in a food hall,” says Keith Castro, vice president of food and beverage for Concept Entertainment Hospitality.  “You can get multiple cuisines all in one check with one delivery fee. And we feel like that's more advantageous.” 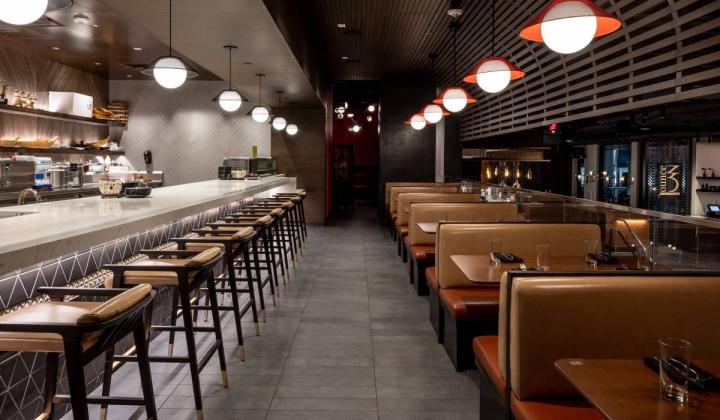 AT&T Discovery Food Hall, which opened in August 2021, looks more like a luxury hotel’s lobby than a food court.

The virtual food hall got started after Grand Central, a Portland eatertainment venue, had shuttered its doors at the onset of the pandemic.

“We had no choice but to really get involved in takeout,” Castro says. “But we realized right away, we’re just one brand but we have the kitchen and capacity to do multiple brands online.”

Over the course of a few months, Concept Entertainment Hospitality created five different brands, logos, and menus. Now, the company operates the virtual food hall from each of its brick-and-mortar Thirsty Lion Gastropub & Grill locations.

As ever, flexibility remains a major advantage of running virtual brands: If one concept isn’t performing too well, it can be easily nixed without risking the up-front costs of building out a full restaurant. Concept Entertainment Hospital learned, for example, national pizza brand pricing made it difficult for its own pizza concept to compete. So, its pizza brand was dropped.

Castro says the trick is making each virtual brand a standalone success with enough following and brand awareness to rank high on third-party apps. He pointed to the company’s Southern Jewel brand, a fried chicken and Southern food concept that rose to the top.

“If we wanted to, we could probably make a four-wall version of that brand,” he says. “There are quite a few people that never even know it's a ghost brand at all.”

The company has contemplated creation of a physical food hall. But Castro worries the traditional model—where each concept has its own kitchen and service area—has become too expensive in terms of operational and real estate costs.

“It takes a lot of work to pull off one of those,” he says. “I think right now we are focused on growing the virtual brands because we can grow them inside the four walls we already own.”

As a diner, Casto says he enjoys the experience of visiting a physical food hall, seeing the variety of choices available and oftentimes finding food at a discount compared to a sit-down experience. But he thinks food halls operating out of a single, central kitchen may be the future of the space.

“I think if you can operate a food hall that has a central kitchen that produces multiple different cuisines and controls quality and execution, I think it's going to be much more profitable and much more consistent quality of product,” Castro says. “So, I think there's a future for it. But I think we have to somewhat get a reset.” 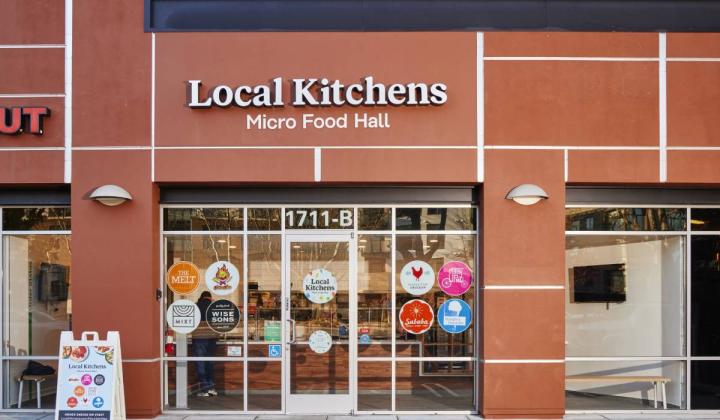 “The pandemic has maybe reset the playing field,” he says, “reminding people why these were popular in the first place.”

What made them popular in the first place was a focus on high-quality foods. At their best, food halls allow customers to discover new dishes from established brands or up-and-coming chefs. Today, the newest food halls are going further, offering more upscale environments to accompany the food.

Retail options are becoming increasingly common inside food halls, as are out-of-the-box additions like manicure and pedicure spots.

Samantha Bennett, associate principal at Cooper Carry, pointed to the Assembly food hall her team designed in Rosslyn City Center, as an example of the future of food halls. That operation, which opened in August 2021, looks more like a luxury hotel’s lobby than a food court. The seating is flexible with distinct areas to sit and linger. And the 29,000-square-foot Assembly features three bar options: a small oyster bar, an outdoor terrace bar and a larger communal bar.

While customers were happy to pivot to QR codes and self-service options during the pandemic, Bennett says they miss traditional restaurant service. That’s why Assembly has a central menu that allows servers to offer disparate items from the food hall’s six different restaurant options.

“I still think the big differentiator between food halls and fine dining restaurants is the sense of community,” she says. “I think people are looking to gather a little bit more and be part of a bigger, more community-driven experience.”

But some operators still view convenience, speed, and price as a driving force in the food hall market.

That’s top of mind for Local Kitchens, a micro food hall concept that allows diners to mix and match food from its different restaurants. The company was founded by two former DoorDash executives: CEO Jon Goldsmith and COO Andrew Munday along with CTO Jordan Bramble, all of whom aimed at translating the food hall experience into a convenient takeout and delivery operation.

By operating a single, central kitchen, Local Kitchens can maintain small real estate footprints and keep operational costs down. Goldsmith, co-founder and CEO of Local Kitchens, says that keeps prices down for customers. Menu items at each concept inside the virtual food halls sell for the same price they do at other brick-and-mortar locations.

“Price is a big deal for sure,” Goldsmith says. “The whole advantage of this model is it's just so much more efficient from a kitchen perspective.”

Rather than creating its own in-house brands, Local Kitchens partners with already successful local and regional brands. Chefs train the staff at Local Kitchens when licensing their brands and maintain an ongoing relationship to ensure quality standards are upheld. That also allows Local Kitchens to leverage existing brand awareness, rather than starting marketing efforts from scratch for new virtual brands.

“Our perspective is there's already tons of great food out there,” Goldsmith says. “We don’t need to come up with new brands.”

While Local Kitchens storefronts feature dine-in space, they specialize in carryout and delivery orders. Goldsmith says the majority of business comes from carryout orders, which save customers the fees charged on third-party delivery apps. The company has so far opened in suburban locations, where food halls see the most demand for weeknight dinners.

But Local Kitchens envisions future expansion into small towns, urban centers, and suburbia across the country. The 2,000-square-foot layout and the existing technological infrastructure make it easy to expand, Goldsmith says.

“I think we have plans to bring this everywhere—national if not international—and definitely to every suburb and city in the country,” he says.

While Local Kitchens has worked to deliver a new model of food halls to the market, Goldsmith doesn’t see any decline in the traditional food hall. Because those venues serve a different, yet still vital, segment of customers.

“I sort of see the world moving toward two ends of the spectrum. On the one hand you’ve got convenience and on the other hand you’ve got experiences,” he says. “Post pandemic, there's probably more need than ever for people to have physical spaces where they can come together and have really great hospitality and really great ambiance. I don’t think that’s going anywhere.”