For restaurants that have traditionally relied on tourism dollars, summer sales could vary widely depending on location.

Despite the widespread coronavirus downturn, a multi-month study by global travel platform Tripadvisor hints at early signs of recovery, with the dining sector leading the way.

Over the two-month period ending May 31, U.S. searches on Tripadvisor restaurant pages were consistently trending upward. Of the six countries analyzed, the U.S.’s number of searches was second only to New Zealand, which experienced a sharp spike in mid-May. Still, online search engines do not directly translate to seats in chairs.

Although 42 percent of consumers said they plan to resume their usual, pre-COVID-19 dining-out habits, 16 percent will avoid eating at restaurants and instead continue with takeout and delivery. In between these two extremes is a middle group, which represents an opportunity—but also a potential pitfall—for restaurants. About a third (35 percent) of consumers will visit restaurants provided they are businesses that keep customers safe.

“[This] report offers plenty of reasons for cautious optimism. There are clear signs that many consumers have a strong desire to dine out and travel again when they are allowed to do so, but when they do they will bring a new set of expectations with them,” said Martin Verdon-Roe, general manager of hospitality solutions at Tripadvisor in a statement. “Businesses that adapt quickly to embrace safety, flexibility, and transparency will have a clear competitive advantage to communicate to consumers and that could prove crucial in hastening their recovery.” 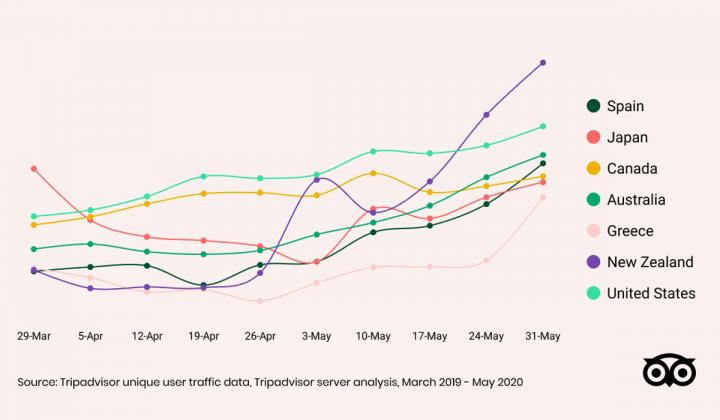 Findings from foodservice insights firm Datassential differ for the two extremes. For the week ending June 10, it found that 24 percent of consumers have no qualms about eating out again, but 45 percent were avoiding dine-in altogether. But like Tripadvisor, Datassential results suggested that about a third (32 percent) would dine at restaurants but were still nervous.

It’s worth noting that the hurdles for restaurants may be lower than they are for other sectors. In the same Tripadvisor study, a whopping 86 percent of respondents emphasized safety and cleanliness in choosing a hotel or other accommodations. This disparity between foodservice and hospitality could be due to the fact that the former has always held itself to a high standard in terms of safety and sanitation. Not only are regular inspections a legal requirement for restaurants, but tools like the National Restaurant Association’s ServSafe training and certification are common.

For restaurants that have traditionally relied on tourism dollars, summer sales could vary widely depending on location. In the Tripadvisor study, 44 percent reported they are more likely to take a road trip, meaning far-flung destinations might not experience the usual summertime rush. At the same time, wary consumers are seeking out more isolated locales. Major cities as well as smaller ones that draw crowds (e.g. Orlando) will almost certainly see a drop-off in business. On the other hand, 59 percent of respondents said they would prefer to go somewhere off the beaten path.

The stress of the past few months will also dictate travel patterns and accompanying expenditures. Just as consumers have gravitated toward comfort foods, they’re also seeking restorative vacations. Tripadvisor found that survey participants were 218 percent more likely to take a trip somewhere they can relax compared to before the pandemic began.

Consumer sentiment runs the gamut, and so too do government regulations with certain states having re-instituted dine-in service as early as April. Restaurants have also varied in their decision to reopen. For many independents with small footprints, it’s not feasible to reopen when capacities are curbed. In this regard, multiunit restaurants with larger spaces have the upperhand. With 80 percent of its restaurants reopened, Chili’s comps were down only 11 percent in the week ending June 3 compared to the previous year; part of the momentum can be credited to the fact that the restaurant started the reopening process in late April at select locations. Other restaurants, like Red Robin used the last couple of months to build new safety policies and procedures before reopening their dining rooms.