Michigan has the highest rate of  small businesses unable to make rent in September at 43 percent.

The number of concepts unable to pay increased 11 points from July to September.

More than half of restaurant owners (51 percent) could not pay rent this month, according to a new study by Alignable.

The percentage is up six points compared to August and 11 points versus July. Respondents attributed the negative trend to growing Delta variant cases, consumer hesitancy, and an overall staffing shortage.

Each of the three concerns will likely remain for the foreseeable future. After the seven-day average for COVID cases decreased to 11,500 in mid-June, the average pushed passed 160,000 in late August and early September, according to the CDC. A number of cities across the nation have reinstituted mask mandates and others have implemented vaccination requirements, such as New York City and San Francisco. In late August, the National Restaurant Association distributed a survey that found six in 10 consumers had changed their restaurant usage due to the Delta variant. Nineteen percent said they stopped going to restaurants and 9 percent cancelled existing plants to dine out.

As for the labor shortage, staffing at food and drink establishments remains 1 million below where it was prior to COVID, according to the Bureau of Labor Statistics. The U.S. witnessed a record 10.9 million job openings at the end of July, with a number of those slots coming from food and accommodation services.

Based on Alignable’s study polling 2,880 small business owners, other industries are hurting too: 35 percent of all small businesses couldn’t pay rent in September, up 5 percent from August. 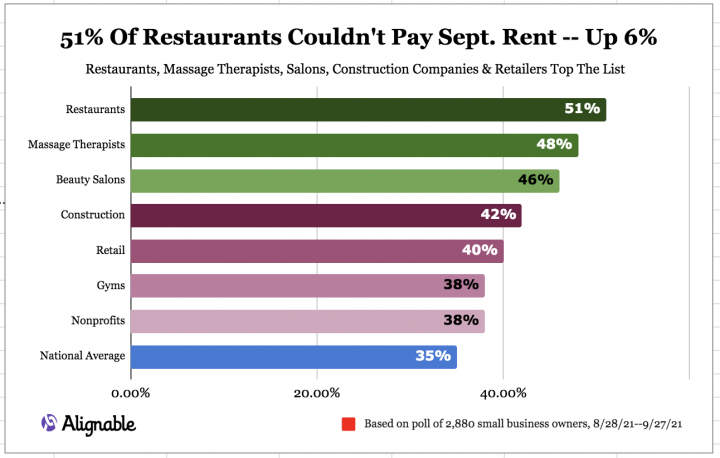 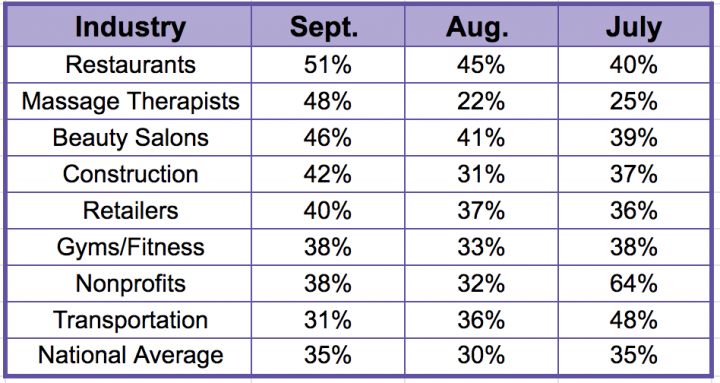 Some parts of the country are experiencing worse cases than others. Michigan jumped 15 points from August and now holds the record for the highest rate of businesses unable to make rent in September (43 percent).

Eighty percent of respondents said they’ve received no help from landlords. Still, the business owners had many suggestions for ways landlords can help.

The No. 1 way was through rent assistance (48 percent). Meanwhile, 28 percent said they’d like to renegotiate their leases, 12 percent said they wanted landlords to create safety protocols, and another 12 percent said ramping up promotions to drive traffic would be helpful. Only 20 percent of landlords are already trying to help tenants with rent fixes and other measures to help with recovery.