What's going to happen to outdoor dining? We're going to find out.

Restaurants Brace for Winter in a COVID Climate

About half of restaurants plan to weatherize patios, a new study finds.

As very 2020 as it might seem, Chicago residents woke up to snow on the morning of April 15. While not all that unique for the Windy City (5.3 inches fell during a storm the previous April) it was a swift reminder of what lies ahead for much of the country. Plenty of city and county officials have outlined guidelines for winter dining.

In New York City, for instance, where more than 10,000 restaurants and bars have taken over sidewalks, streets, and other public spots through the Open Restaurants program, Mayor Bill de Blasio extended outdoor dining in September, making it a permanent lifeline. It was originally scheduled to end October 31. Now, restaurants are allowed to deploy propane heaters on sidewalks. Restaurants also have the option to enclose outdoor areas (if so, at 25 percent capacity).

Even heated and potentially enclosed, though, it’s hard to predict how customers will respond. It’s yet another uncertainty tossed into a year devoid of long-term answers.

It’s difficult to bet on indoor capacity expanding near-term given the state of COVID-19. The country reported 102,831 new infections last Wednesday—the first time since the start of the pandemic America reported a six-figure number.

In just the past week, the U.S. witnessed its top five days with the highest case numbers. The previous record was set October 30 at 99,321. So it took the country less than a week to break it again. The nationwide seven-day average of new infections was about 89,859, or a 108 percent jump in a single month.

Per Johns Hopkins, at least 36 states reported more cases than the previous week.

It suggests what pundits cautioned for months—that a fall surge was likely (where we are today) and winter might be worse.

As Chicago did in late October, it actually seems more plausible markets will step back and re-shut dining rooms rather than loosen restrictions. This is especially concerning for dense, urban areas. (But really, everything can change and then change again within days).

Regardless, thousands of restaurants will try to hold outdoor dining as well as the off-premises gains they’ve built since March. With limited indoor capacity expected to continue, restaurants will land in a place they’ve seen many times during the pandemic: Considering things that were never part of the playbook. Stuff like weatherized patios, delivery as a core revenue stream, and competing for a small pool of willing winter diners. In some cases, simply trying to stay open to separate from the competition that can’t.

Rewards Network, a provider of marketing and financing services to the industry, which has more than 12,000 restaurants in its base, conducted a study to see how operators felt about adapting to cold-weather dining.

Although you hear of restaurants today operating with 100 percent capacity (it’s probably closer to 80 percent when you make room for 6 feet between tables), it’s still not widespread. Texas Roadhouse, which has close to 600 units, had 188 doing so in September.

In Rewards Network’s survey, only 15 percent of restaurants said they were allowed to dine at full capacity, with nearly half saying they were running at 50 percent.

Of the operators at less than full capacity, only 29 percent said they could keep their doors open indefinitely. This is something that’s surfaced in multiple studies. A survey from the James Beard Foundation, in collaboration with the Independent Restaurant Coalition, said 50 percent capacity wouldn’t be enough to stave off mass closures. Rather, operators said they needed nearly 60 percent, on average, to keep going.

Owners in a Coca-Cola study said they had to reach 55 percent seating capacity in order to remain profitable.

Either way, it’s not less than half.

Nearly 50 percent of respondents in Rewards Network’s survey said they’d last a year at that mark. Twenty-eight percent picked “between four and six months.” Essentially, long enough to last through the winter and hope business surges back.

“This tells us that another shutdown or further limiting of capacity prior to spring will likely cripple many restaurants,” Rewards Network said.

It begins to support grim data from the National Restaurant Association, which guided $240 billion lost revenue this year for the industry, as well as the potential for 100,000 closures. That would be somewhere in the ballpark of one in every six restaurants. 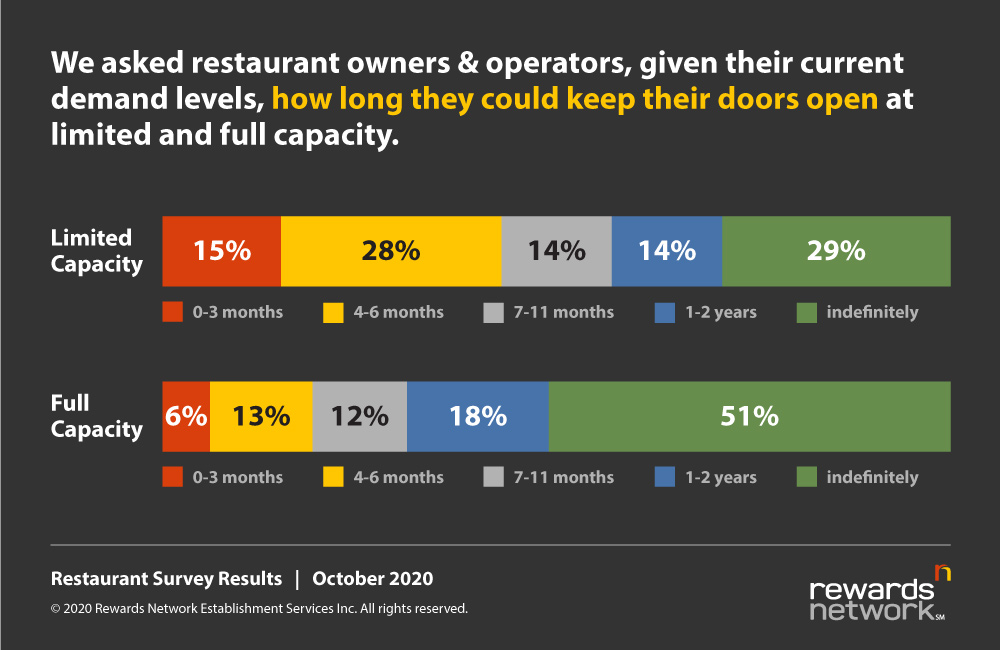 When asked how consumer demand for dining out compares to pre-pandemic days, only 3 percent of operators said it hadn’t changed, according to Rewards Network. The top answer, by far, was 50 percent demand, with nearly 45 percent of respondents choosing the option.

So how long can restaurants keep their doors open if less than full demand remained the norm, but there were no capacity limits? Half said indefinitely, with nearly one in five saying they would only run through the winter months.

Understandably, restaurants are clearly more optimistic under the full-capacity/lower-demand scenario than the limited-capacity scenario. As we’ve seen throughout the pandemic, the preferred option, always, is to try to ignite trial and demand. Take control in strange times. With capacity restrictions, though, there’s simply only so much you can do when it comes to four-wall dining.

Another challenge likely to continue, Rewards Network said, is smaller party sizes. In fact, 87 percent of survey respondents said party sizes are smaller now than before COVID. Naturally, this leads to smaller checks per table. If consumer demand trends downward as colder weather arrives, combined with further capacity restrictions, and fewer people allowed per party, restaurants are staring down another significant revenue drain.

For Rewards Network respondents who reported having outdoor seating, or planned to do so soon, and whose climates allow them to seat people outdoors nine or fewer months out of the year, the decision to weatherize the patio for colder weather was split. Half said they would invest in making their patio cold-weather friendly. The other half would not. When you’re talking roof coverings, tents, or heating units, it’s not a cheap process. 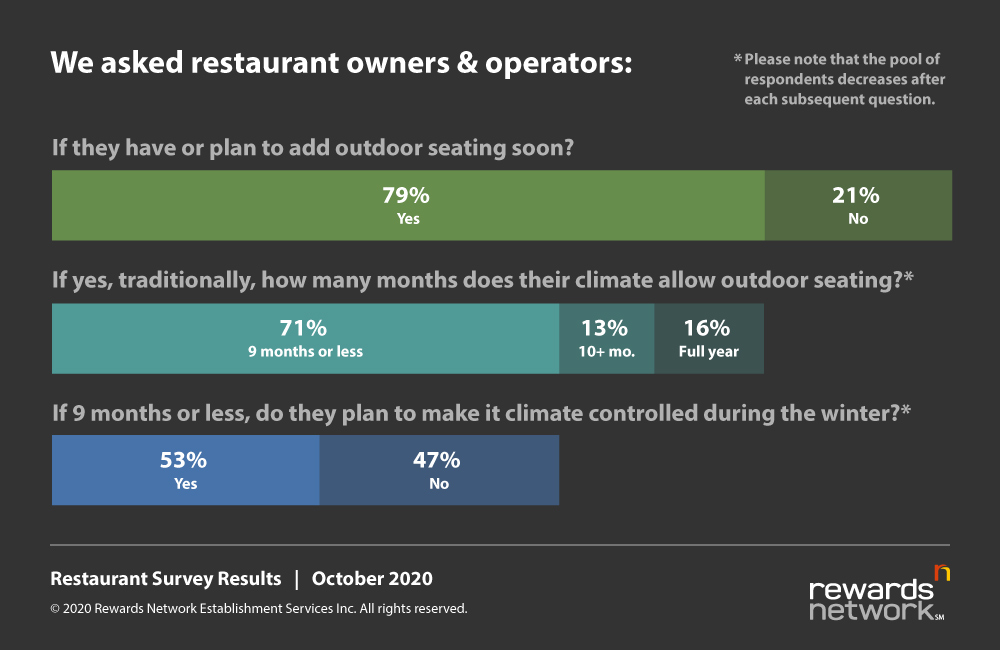 According to TouchBistro, restaurants thinking about roof overhangs, awnings, and other horizontal coverings should face them south to provide shade in the hot summer and sun in the winner. (An example of how strategic this notion is). They could also consider seasonal or roll-down wall panels to protect against strong winds. Ripstop vinyl-coasted polyester roll-down wall panels (great for rain) are another option. Side coverings, it said, need to keep outdoor air flowing in order to lower the risk of airborne or aerosol transmission of COVID.

TouchBistro provided an example of a Chicago restaurant, The Delta, putting vented windows at the top of its canopy roof covering to keep air flowing.

Lighting needs to fit the climate and safety concerns. So does the furniture. Warm-to-the-touch materials like wood instead of metal. Lounge seating. And so it goes.

But just in October, per a story in Eater, restaurants in NYC were struggling mightily to get propane heaters they ordered. One restaurateur said he ordered six for $150 each and only two arrived. Plus, prices on Amazon keep rising.

Another operator said he tried to buy some but they wouldn’t be available until December. The heaters were priced as high as $700 each as well.

Restaurants also need to account for the cost of fuel or electricity with these heating elements, exchanging empty tanks, and even where to store them. Owners told Eater electric heaters outside require special lines run by an electrician to operate efficiently.

By now, however the good news is restaurants are pretty adept at anticipating customers’ wants and needs in a pandemic. Of the operators who plan to make their patio winter ready, nearly two-thirds said diners will be very willing or somewhat willing to dine on the patio in colder months. Whether or not this changes with more case spikes is impossible to say yet.

“This is encouraging for restaurants, especially as only about 8 percent of respondents said that guests will be very unwilling,” Rewards Network said. “And since the respondents were split between weatherizing and not weatherizing their patios, this may tell us that the most optimistic owners are planning to do so because they believe outdoor dining demand will be there.”

There is one survival tactic that won’t feel the wrath of Mother Nature. At least not as directly. You could even argue it might get a cold jolt.

The delivery outliers are pretty hard to find. Brands like First Watch and Another Broken Egg, which had basically zero programs before, have invested in online ordering and delivery partnerships, and seen positive results.

A large number of restaurants launched their own delivery service to remain afloat, too. This could turn out to be a good investment. Previous Rewards Network consumer surveys indicated people expect to order delivery more in the coming months. Off-premises tends to be a sticky occasion once the awareness and adoption gap is cleared. It should only pick up in winter. Even without COVID, people don’t always want to brave the cold.

Of the restaurants surveyed, 27 percent said they launched their own delivery service. Third-party delivery remains unrealistic for some due to the fees. And in-house delivery allows brands to keep some staff employed.

The cost of launching in-house delivery service was all over the board in Reward Network’s study, ranging from nothing to $10,000. The average was $1,923.

The cost depended on several factors, such as labor needs, POS upgrades, and marketing costs. For example, if a restaurant could cross-utilize current staff to deliver food and already had POS capabilities to handle delivery orders, the cost to launch was minimal. “We encourage restaurant operators to closely evaluate the true cost of third-party delivery services against the investment in their own delivery operation to understand the long-term return on each method,” Rewards Network said.

Additionally, the company asked about aggregators. DoorDash and Grubhub were the “primary” vendors for most, with Uber Eats coming in third. When asked how profitable or unprofitable these services were, only 6 percent said very profitable, which is a pretty stark figure. The top two choices were somewhat profitable and break even.

What that suggests is that while these services helped keep the lights on for nearly half in Rewards Network’s study, the other half typically broke even or lost money. 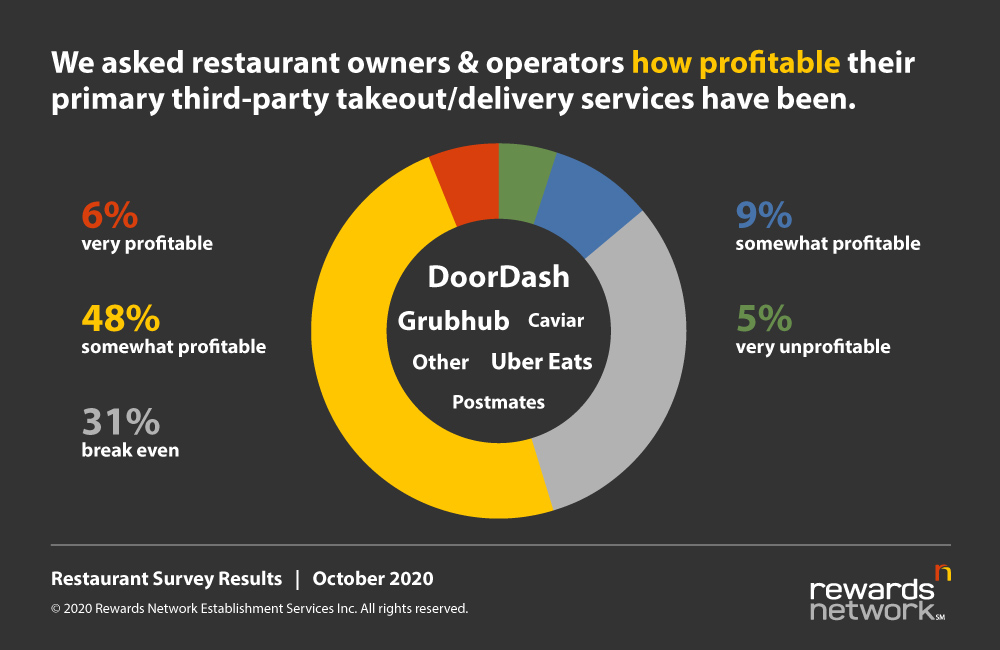 This statistic, along with 48 percent of consumers saying they plan to dine out less this fall/winter compared to past periods, further highlights the need for restaurants to consider launching direct delivery service, because most restaurants cannot afford to cut margins for a sustained period of time, Rewards Network said.

Lastly, the company asked respondents if they raised or lowered menu prices in response to COVID, and if guests cared. Nearly 42 percent said they did raise prices to counter lower capacity and demand. Of those, consumer reactions were cut down the middle. Nearly half said customers have not noticed, the other said some did. For guests who did, one out of five complained, while the majority were understanding. No restaurant indicated “many customers” noticed and complained. 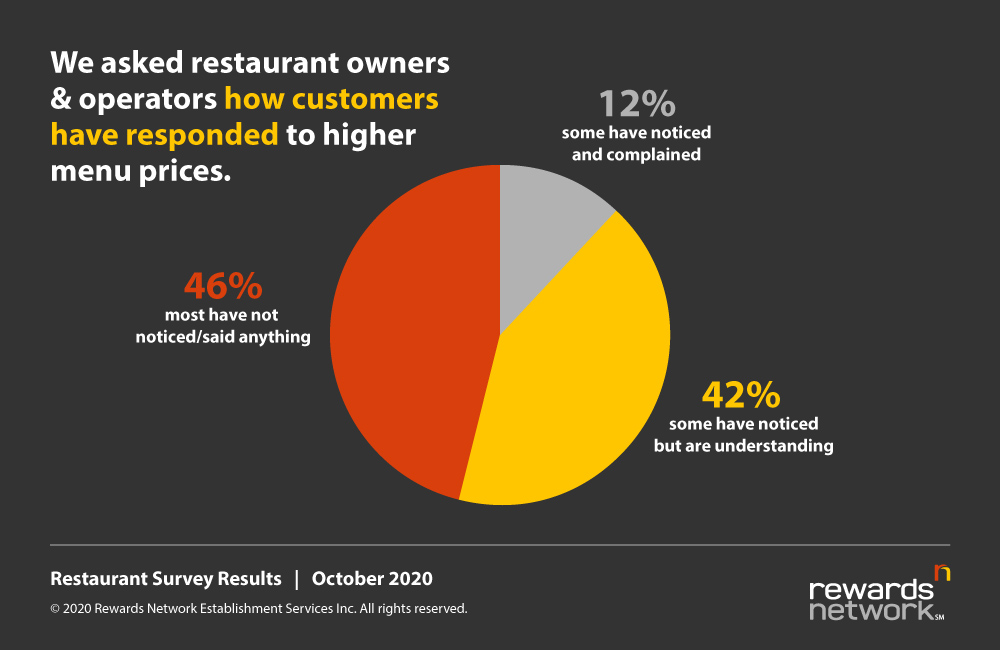 As abundant challenges await restaurants, 69 percent said they were still optimistic about their chances. Only 8 percent were on the other side of the spectrum.

“Restaurants that can find a way to attract diners throughout the colder months and make delivery profitable will be set up for success through, hopefully, the last legs of the pandemic,” Rewards Network said.