In March, a survey of 8,705 small business owners revealed that 63 percent of restaurants and bars couldn’t pay rent—the highest amount among the small business categories.

Data shows minority-owned businesses are having the toughest time.

Vaccinations, stimulus checks, and warmer weather are fueling a resurgence in the restaurant industry, and the data proves as much.

A recent survey of 8,943 small business owners between March 27 and April 5 showed that 35 percent of restaurants couldn’t cover rent in April, a 28-point improvement from March, according to online referral network Alignable. Among the small business categories listed, only retailers (31 percent) fared better than restaurants. In another survey taken in late March, 42 percent of restaurant operators said they don’t expect a full recovery until 2022 or later, which was second-lowest only to gyms at 38 percent.

“Many of these industry trends are very promising and it’s beyond encouraging to witness what's happening,” Chuck Casto, head of public relations for Alignable, said in a statement. “That said, the thousands of small business owners in these industries are still fighting every day to keep their businesses afloat. In other words, most small business owners are far from running a victory lap.” 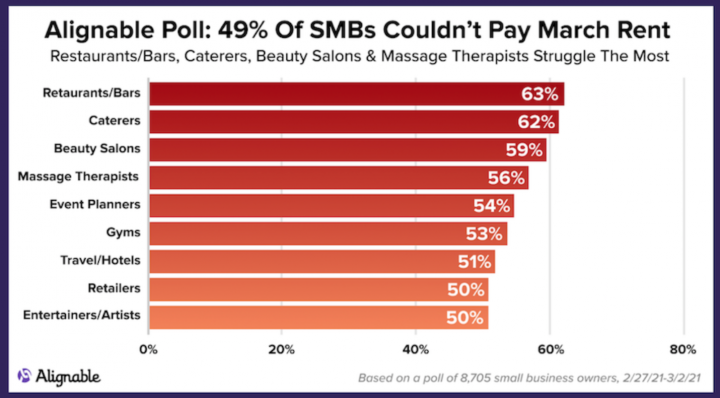 Restaurants have reason to be optimistic. According to U.S. Census Bureau data released April 15, food service and drinking places collected $62.2 billion in sales in March, up from $54.3 billion in February and $55.9 billion in January. It was $45.73 billion in March 2020 and $65.3 billion in February of that year, just prior to COVID’s arrival. Black Box Intelligence found that March’s same-store sales lifted 62.3 percent compared to 2020, and 1.8 percent on a two-year basis.

More help is on the way, as well. In early March, Congress passed the $1.9 trillion American Rescue Plan, which includes $28.6 billion in direct grants for independent restaurants and chains with 20 units or fewer. The funds will help not only with rent, but also payroll, debt service, utilities, maintenance, outdoor seating, mortgage obligations, and several more expenses. 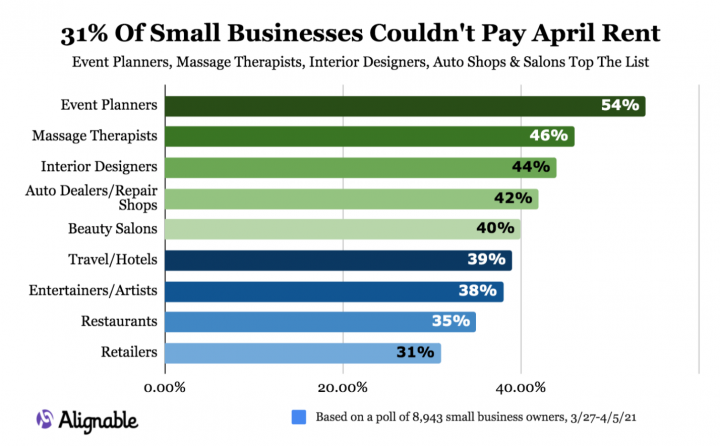 California, arguably the most restrictive state since the pandemic began, has plans to fully reopen its economy by June 15 if certain conditions are met. Nevada, which of course includes popular destination Las Vegas, expects to reopen 100 percent in all counties by June 1.

The biggest obstacle for restaurants, other than COVID cases rising in multiple states, is the thinning labor pool. In response, IHOP, Taco Bell, Firehouse Subs, and others are hosting large job fairs. In addition, Chipotle is elevating its debt-free degree program and Whataburger is paying general managers six-figures. A McDonald’s in Florida is even offering $50 for candidates to come to the interview. Food and drink places gained 176,000 jobs in March and had 10.5 million employees on payroll. That’s still approximately 1.2 million short of March 2020 and roughly 1.8 million shy of February 2020.