The Keys to Guest-Pleasing Fusion Cuisine

When it comes to fusion cuisine, there are no rules per se, but authenticity and familiar formats can go a long way in winning guests.

In 2008 then-unknown chef Roy Choi opened his food truck, Kogi Korean BBQ, in Los Angeles. Serving Korean-Mexican fusion food such as kimchi quesadillas, the concept ushered in a new era of cross-cultural mashups. Choi’s creativity gave chefs of all backgrounds license to push beyond tradition. His work also raised the question: If you can mix Korean food with Mexican, what can’t you mix?

Even a dozen years ago, fusion food was nothing new; Choi and other enterprising chefs simply brought it to prominence. For as long as people from different cultures have been fraternizing, there’s been a melding of flavors, techniques, and dishes. Now such combinations are ubiquitous.

“This is a real marker of a moment in time,” says Kara Nielsen, a food trend expert and consultant based in the Bay Area. “Fusion is how any cuisine functions. People immigrate and bring new ingredients; this is how cuisines evolved. This will flit through and a few things could stick. We’ll just have to wait and see what they are.”

Fusion restaurants can be very enticing to Americans, and it’s important for operators to put a more contemporary spin on items, says Darren Tristano, CEO of Chicago-based consultancy Foodservice Results. “There are so many flavors that are unexplored by American consumers so researching, testing, and offering new ingredients can be very exciting and create continued demand,” he says. 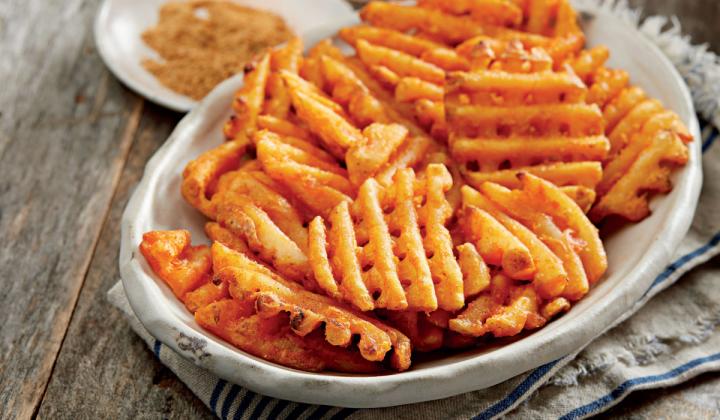 Masala waffles fries bring a more nuanced flavor thanks to the indian spice.

Authentic, with a twist

Three years ago Michael Ryan opened Flip Sigi, a Filipino taqueria in New York City. In that time, the concept has become so popular that Ryan is now looking to expand.

The food, he says, is not authentic Filipino but instead focuses on Filipino flavors such as calamansi (a citrus hybrid) and tamarind. The restaurant plays with these flavors but puts them in a format people can understand, such as tacos and rice bowls, because, as Ryan points out, many consumers are intimidated by Filipino cuisine.

Initially Ryan did try more authentic dishes, but it wasn’t a huge success. Staples like sisig, which is made with pig head, “freaked people out,” he says. To that end, he’s unlikely to offer other items, such as balut (fertilized duck egg, thus featuring a duck embryo).

“You have to listen to your guests,” he says. “We’re not looking to cater to the diehard Filipinos; we’re trying to be a little more mainstream.”

To that point, the crowd at Flip Sigi tends to be women aged 18–34. He says those patrons are foodies and often Instagram savants. “They are the ones looking for something interesting, and they’re aware of what’s going on,” he says. 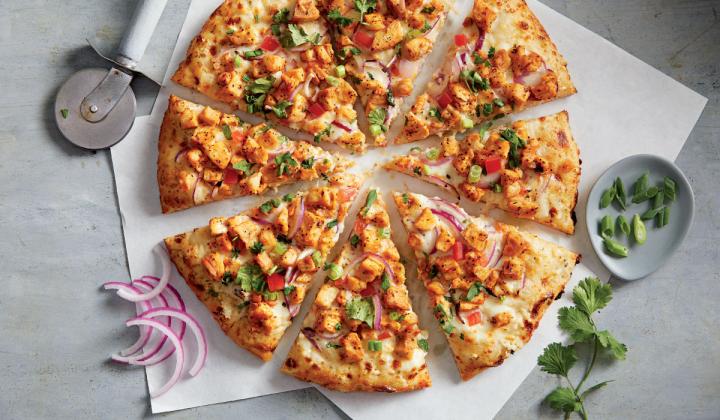 The Chicken Tikka Pizza is a fan favorite at Curry Pizza House.

Across the country, Gursewak Gill opened the first Curry Pizza House in Fremont, California, in 2012. What started as a single fast casual has now grown to nine locations, including one full-service outpost in downtown Palo Alto.

Gill, who grew up in India and moved to the U.S. in his teens, wanted to combine two cuisines he loved. “The idea was that all cultures can come in, and it’s a blend,” says Neelu Gill, director of operations and Gursewak’s wife.

Curry Pizza House offers traditional pizzas, but by far the most popular, accounting for about nine out of 10 orders, are the craft curry pizzas such as the Curry Chicken Masala and the Palak Paneer.

The traditional pizzas do well with kids and diners who prefer to play it safe, but Gill continues to push the envelope by offering dishes patrons may have never before encountered.

Avila now operates Guerrilla Tacos as a fast casual, but he has also transitioned part of the business to full-service, in the form of omakase dinners. Every Thursday, Friday, and Saturday, Guerrilla Tacos transforms into a fine-dining experience. For $95, guests are treated to a seven-course meal featuring ever-changing, fusion dishes.

At these dinners, Avila has free rein to flex his culinary muscles. His guiding post in creating new dishes? “To be authentic to me, to represent Los Angeles, and to interpret Mexican food through the eyes of an Angeleno,” he says. “It’s more important for me to enjoy making the food than try to replicate what someone else is doing.” 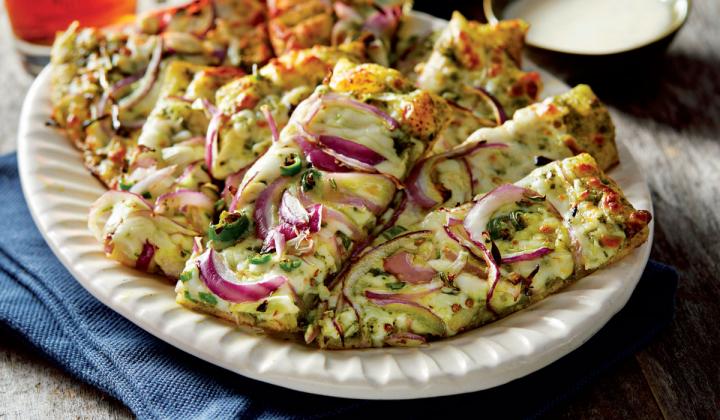 At Curry Pizza House, Desi Pesto Spicy sticks get a kick of heat from green chilies.

Shalom Japan in Brooklyn, New York, is a fusion of Jewish and Japanese food, reflecting the respective heritage of the husband-wife owners. Sawako Okochi trained at the New York Restaurant School before working as sous chef at Anita Lo and then head chef at The Good Fork. Her husband, Aaron Israel, previously worked under some of New York City’s most acclaimed chefs, including Tony Liu at August and Andrew Carmellini at A Voce.

Robert Sniffin worked with the couple as a server just after they opened in fall 2013 and recently returned to the restaurant as general manager.

“It’s important to know the rules and when to break them,” he says of Shalom Japan’s culinary mashups. “You can always find different ways to do things.”

Still, the menu isn’t exclusively fusion. Some dishes are simply Japanese (scallops with maitake mushrooms and miso butter) while others, like the Jew Egg (with hummus, spinach, pine nuts, currants, and feta) are more reflective of Jewish cuisine.

“I think when you get locked into fusion as an idea, you think it must be 50-50, but you can lose the essence of what you’re trying to do with your food if you do,” Sniffin says, adding that the couple has also experimented along the way. “We’ve done fluke dishes—steak dishes, schnitzel, duck—but we’ve streamlined the menu to make sure we’re providing the most ‘us’ dishes.”

Guests who gravitate toward fusion dishes tend to be curious and eager to learn more about different foods and cultures. With a captive audience, chefs have the enviable opportunity to bring old ingredients and cooking traditions together in new ways. In a sense, they are culinary ambassadors who welcome guests into new territory without overwhelming them.

“Diners still need education and bridges to new experiences, so chefs create those bridges,” Nielsen says. “The dishes often end up not as authentic as those intended for native diners.”

Still, there are limits to the combinations and applications of fusion. In some cases, the seasoning of one may clash with the spices of another. Other times, the cooking techniques are too dissimilar to reconcile. “There are fundamentals to how you build taste and flavor so one thing doesn’t drown out the other,” Nielsen says. “You can’t just slap together so many things that don’t taste good.”

That said, if something has proved too difficult to mesh in the past, it doesn’t mean an inventive chef might not finally crack the code. At the end of the day, the final product—and guest reaction—will determine which mashups work. Beyond that, anything goes.

“You can mix any cuisine types as long as the outcome is appealing,” Tristano says.