Customers are looking for restaurants they admire to be an active participant.

How Customers Want Restaurants to Respond to the Racial Crisis

Here's what consumers want to see from their favorite brands.

Release a statement or not? Let actions speaker louder than words? Take to social? Website? Email? Personal or company-wide?

These are all questions facing restaurants in the wake of George Floyd’s killing and subsequent national reaction. Not just whether or not to speak up, but how to do so. Is it the type of thing you toss the playbook for? What do you employees want to see? There are many steps ahead, as well as pitfalls.

Insights company Sense360 fielded a survey from June 3–June 4 asking consumers to identify how recent protests impacted them, their shopping behaviors, how they believe companies should react, and what effect that would have on their purchasing habits.

Let’s start with some basics.

Sense360 found that even if total foot traffic trends have not been influenced much by protests, individual shopping decisions were disrupted for nearly half of the 70 percent of people with a demonstration nearby.

45 percent: People with a protest in their area who said their shopping behaviors were in some way impacted.

The top three ways this happened:

36 percent: Of those people with a protest nearby said the business they previously frequently intentionally closed in response to activity. The Cheesecake Factory said it shuttered, or partially, closed, 87 restaurants because of protests—a move that helped sink same-store sales 63 percent in Q2 to date through May 31 (a period that began after March 31). How that split between COVID-19 impact and protests was not clear.

Womply, through daily analysis of credit and debit card transactions at 400,000 local businesses, noted Minneapolis daily revenue started to trend downward on May 24. Measured against average daily revenue during the pandemic, revenue May 23 was up 8 percent, marking 11 straight days of positive results—a sign of recent recovery.

But come Sunday, May 24, the number fell to negative 8 percent, the first red result since April 26. It plummeted to negative 33 percent on Friday, May 29. On Saturday and Sunday of that weekend (when protests were in full force) daily revenue decreased 47 and 21 percent, respectively, compared to pandemic averages.

In sum, after seeing a steady recovery at local restaurants, revenue dropped to below the average daily revenue experience since March 15. Similar trends emerged in LA and Philadelphia. Here’s a full look at the data.

22 percent: Of respondents with a protest in their area who said a business they previously frequented was damaged due to protest activity.

Per Sense360, restaurants were not the most-affected category. That would be grocers.

Types of purchases impacted by protests:

Made purchase(s) at different place in order to stay away from protests:

So how should your brand address the racial conversation unfurling across the nation? Here’s what customers want to see. 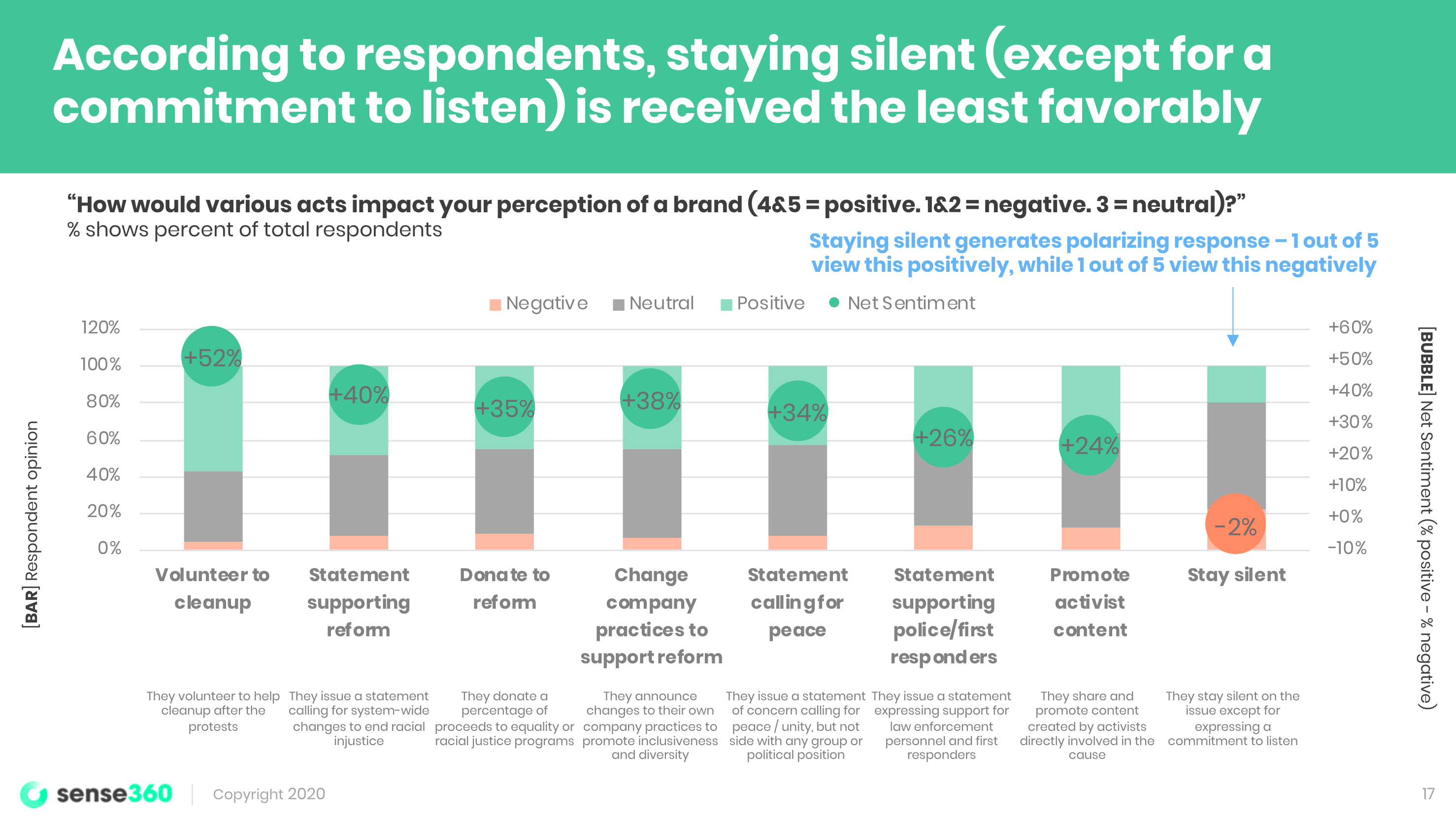 Overall, they need to know brands they support are taking action, via public statements and efforts to improve communities. Both can improve brand perceptions or lock in already loyal sentiments.

“How would various acts impact your perception of a brand? [5 being very positively impacted]”

They volunteer to help clean up after the protests

They issue a statement of concern calling for peace/unity, but not side with any group or political position

The takeaway: Customers are looking for restaurants and brands they admire to be an active participant. What that role looks like differs and probably comes down to the guest base. But something needs to be said or done to reward consumer trust and support.

The chart below illustrates this further. 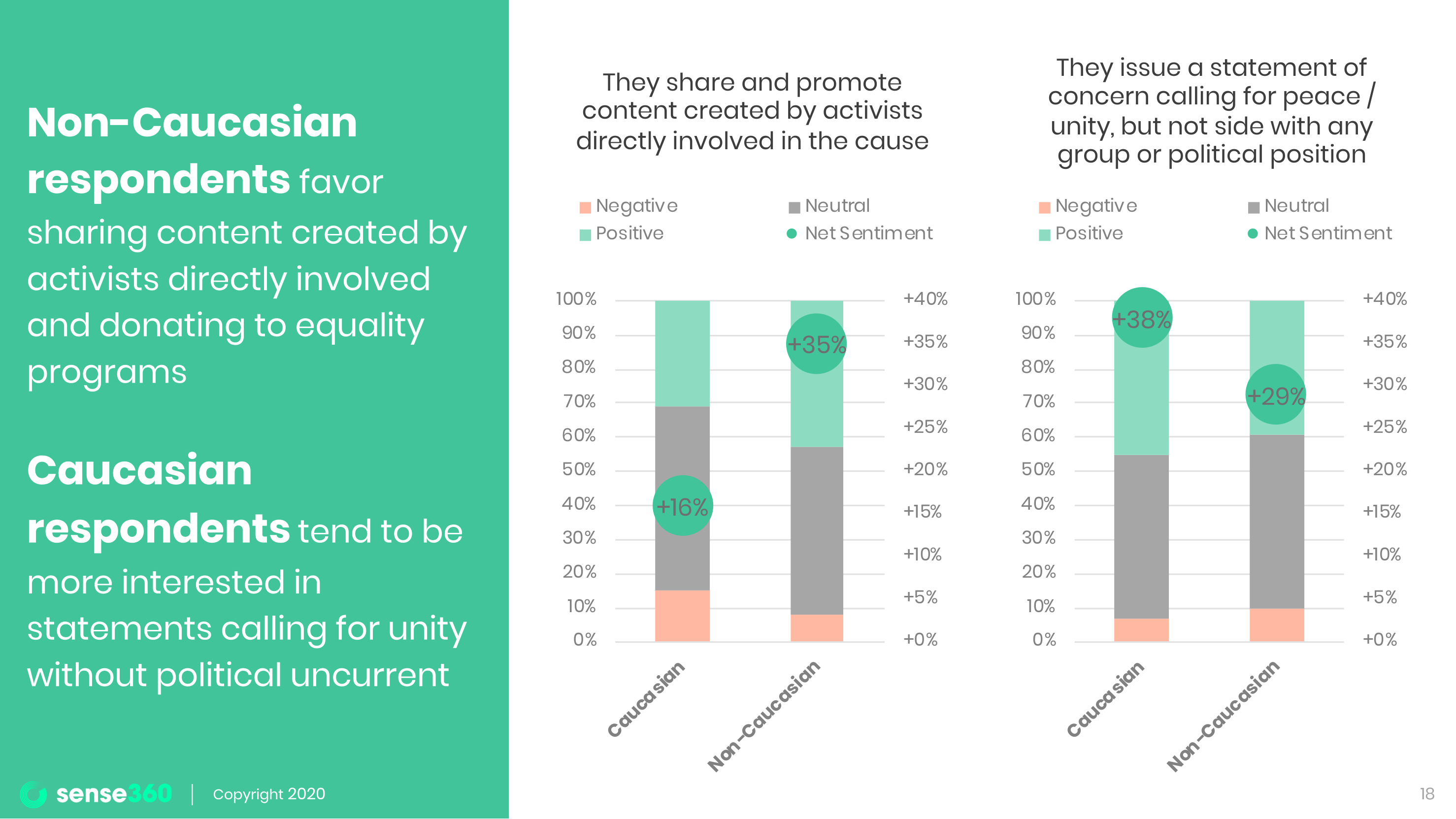 This next set looks at how the response could play out across demographics.

Essentially, on the most and least popular actions, there was a high level of consensus, but others vary by the ethnicity of the respondent.

Net sentiment score from “how would various acts impact your perception of a brand.” The percentage is the difference in net sentiment.

And here’s where the needle stayed the same, on the highest and lowest scoring actions.

Sense360 asked some respondents to chime in. Many people said they wanted companies to support protesters and understand one another. Also, to take action beyond words.

“Acknowledging the history that has led us to this point, and making a commitment to promoting and enacting systemic changes to address the concerns. Actions that support that commitment beyond just statements.”

“Through financial and material support as well as lobbying efforts to that end.”

“Actively support [people of color] and listen to what we’re saying, as well as donate to organizations and use their influence to help.”

Does it feel like COVID-19 chatter has fallen a few decibels amid protests? No question. Hard to put a timeframe on that exactly, in terms of how long it will last, but there’s little debate it’s a near-term reality.

More than 50 percent of Sense360’s respondents said protests would likely cause attention for coronavirus to decline. This was especially the sentiment among Caucasian consumers.

“Do you expect recent protests to change the public’s attention/seriousness about COVID-19 restrictions?”

As for how this affects restaurants, it’s anybody’s guess. The dual-crisis news cycle is happening as more than 68 percent of all restaurant units are now in states, counties, or municipalities where they are permitted to reopen their on-premise service, according to The NPD Group. And sales declines continue to soften. In the week ending May 31, U.S. restaurant chain transactions declined by 18 percent compared to same period year ago, a 3 percent week-over-week improvement, according to CREST Performance Alerts.

You can see a direct correlation to lockdowns lifting, which suggests similar upticks nationwide in the coming days. As expected, New York and California had the steepest customer transaction declines, negative 34 and 27 percent, respectively, in the week ending May 31 versus 2019. For perspective, restaurant transactions in Kentucky, where on-premise dining at limited capacity was allowed starting May 11, declined by 2 percent, NPD said.

“The industry will move to the recovery phase when all states reopen on-premise dining and we can begin to make a detailed assessment of how many permanent restaurant closures there are and how that will affect what the industry will look like as it re-emerges,” he added.

Will the protests change this? It’s likely to balance itself out to some extent. You’ll have people who lower their purchasing trends amid protests and those who give less attention to COVID-19 suddenly because of them, and thus buy more away from home. How those scales shift is something we’ll find out in time.

And if there’s a second wave, or protests level out, all this can change again. It remains dynamic, as ever.