Headed Into 2022, Soup Heats Up on Restaurant Menus

After craving familiar soups during the pandemic, consumers are ready to branch out.

For many chefs and restaurateurs, the winter months signal an opportunity to add—or at least emphasize—soup offerings. And while renditions like chicken noodle and New England clam chowder remain staples, soups have expanded beyond their roles as starters or sides and now feature flavors that eclipse the typical American palate.

To wit, international soups such as ramen and pho have exploded in popularity over the last five years, with ramen restaurants accounting for $1 billion in market share, according to a report published by industry market research firm IBISWorld.

“Soup contains a lot of soul. I think that’s why people love it,” says chef Aaron Cuschieri. “You can build so many layers of flavors. That’s what cooks love about making soup. I worked in a ramen shop for years, and we always believed that the soul was in the broth.” 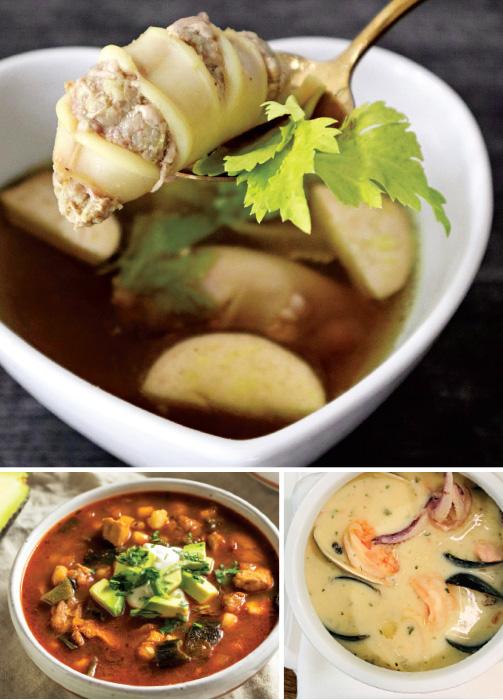 Cuschieri, who is the executive chef at The Dearborn Tavern in Chicago, says soups have the ability to convey so many different flavors thanks to myriad cooking techniques. In addition to the wide variety of flavors and textures, the dish’s familiarity is something customers love too, he says. Coming out of a pandemic that felt anything but familiar, diners were clamoring for food that provided a certain level of comfort.

“Even on days that were 70, 80, 90 degrees outside, we had customers ordering the tomato soup,” he says. “We had incredible success with it this past summer. People want familiarity; people want to eat something that they know. As people are starting to go out again, they’re looking for things that make them feel good, that sense of nostalgia.”

And while Cuschieri believes diners are searching for that familiar flavor, he also expects that they will step outside their comfort zone post-pandemic and dabble in more international flavors. He’s betting on Asia and Latin America to be the next big flavor destinations in soups.

“People are starting to realize how fantastic the flavors are. That’s why people love soups from Southeast Asia and Japan,” he says. “We’re definitely going to see soups like ramen and pho spread beyond major markets like Chicago. I think also once you start to get out of the big cities, we’re going to see more Central and South American soups on menus. People are starting to realize how fantastic these flavors are.”

Chef Hong Thaimee, who recently opened Thaimee Love in New York City, shares similar thoughts about the future of soup trends. Growing up in Thailand, Thaimee says soup is a way of life in Thai culture. It’s served with almost every meal and differs from many soups found in Western cultures.

“Soup is not a starter in Thai culture,” Thaimee says. “Soup is part of the entrée.”

Unlike dairy-laden American soups such as corn chowder and broccoli cheddar, Thai soups almost never use dairy and generally have a much clearer broth, she says. Soups from Thailand also incorporate salty, savory, sweet, sour, and umami components, compared to American soups, which generally trend savory.

Thaimee says guests are further enticed by the layered flavor components. Dishes like the Yum Gin Ghai, a Northern Thai–style chicken soup, are seasoned with a variety of potent herbs and spices, including turmeric, lemongrass, galangal, and mint. In the few months Thaimee Love has been open, that dish has already garnered customer praise.

“I think they love it because we live in such a very tough environment right now,” she says. “The majority of input in our lives you hear more negative news than positive news. … I think that what people are looking for is something that makes them feel good, something that nourishes them.”

Thaimee says the Yum Gin Ghai isn’t leaving the menu anytime soon, but she recently introduced a new, even more daring soup. The Tom Pla Muk Yad Sai features squid that’s stuffed with ground pork in such a way that it resembles a dumpling. She hopes the trend of customers branching out and trying something new in the soup world will help make this dish a popular menu item.

“I think soup is like a never-ending adventure,” she says. “I think we should keep pushing the limits of soup. Soup can be the star of the restaurant. It is beyond an appetizer for sure.”