Food has connected people before. It can (and will) again.

Has COVID-19 Ended the ‘Live-to-Eat Society?’

Today, it's function over fun. But maybe restaurants can help change that.

Logical or not, food has gotten a bad rap during the COVID-19 crisis. Call it the (hopefully temporary) death of the “live-to-eat society.”

Datassential’s latest 1,000-consumer dive into the coronavirus age centered on this shift, and how restaurants can work to change the narrative. Goal No. 1: Stop just selling food. Instead, it might be time to look at meals as a way to connect people in a time when they’re feeling increasingly isolated.

“Necessity is the mother of invention, or so you might think from many of the headlines,” the insights platform said. “Articles themed around how to keep entertained and connected during social distancing highlight the creative ways people are entertaining themselves. But the numbers tell a different story, at least when it comes to food-focused entertainment.”

What that data shows is that eating today seems more function than fun. That includes things like purchasing carryout or dessert from a restaurant. Even fewer are sharing food and drink occasions with others virtually. Yet Datassential said there’s reason to believe people want to, and the demand could pick up as social distancing guidelines extend into May.

THE REPORTS SO FAR

1. Coronavirus & The Impact on Eating

So, the opportunity becomes, who is best to satisfy this pent-up demand? Is it grocery stores and prepared foods, or is restaurants? Front Burner Restaurants CEO Randy Dewitt said their Whiskey Cake brand has enjoyed success with “Quarantine Kits,” things like a “Mimosa Kit” for $20 that includes a 16-ounce fresh squeeze orange juice and two bottles of bubbles. There’s also “Blobby Mary Kits,” “Brunch Kits,” and other collections handed our curbside that encourage a dine-in experience at home.

Datassential asked respondents, “Which of these quarantine activities have you tried or would you consider?

Cook a special/new recipe as a treat

Do “date night in” with your spouse/partner

Order-in a restaurant meal as a special treat

As you can see vividly, there is a massive gap between what people are actually doing and what they want to do. That’s often the root of opportunity.

Can restaurants serve these occasions? Without question. Many concepts probably already are but just aren’t packaging it that way. Chipotle has hosted virtual lunch meetings with celebrities, like former NFL star Rob Gronkowski, to huge audiences. A “date-night in” package, for instance, would offer a different way to present the same family bundles already on the menu. It could give restaurant marketers a fresh chance to blast out new news via email and direct mail, or to curate a social campaign. And one thing that has proven effective turning this time: transparency, engagement, and user-generated interaction.

A “virtual happy hour,” is another creative option to get restaurant executives talking to guests directly, taking their questions, promoting the company message. Also, it’s a solid avenue to suggest or share an upcoming offer, or simply tell customers you’re serving a break from the monotony of self-quarantined life. With a face behind the promotion.

There really hasn’t been enough messaging out there thus far about the relative safety of take-out and drive thru versus braving the grocery store. People still, generally, seem to tie the message, “it’s dangerous to dine at a restaurant,” with “getting food from a restaurant.” It’s a crippling misconception for operators. Any promotion or chance to suggest the opposite is important. Linking food with positive experiences might just be the place to start. 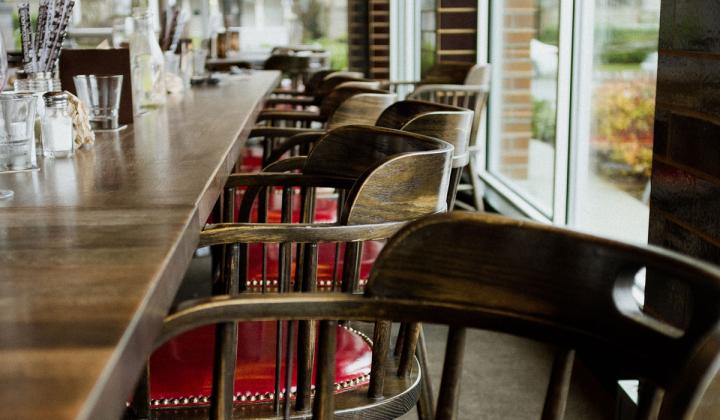 The dine-in element is out of the picture for now. Yet is it possible to send some of that hospitality home with guests?

What role is food playing?

“With food front and center to much of the turmoil around COVID-19, it’s no surprise that we are beginning to see changes in daily eating routines,” Datassential said.

Nearly half of customers are now cooking/baking from scratch more often, the company found. There’s also been a rise in “emotional” eating, with increases in consumption of comfort foods, stress eating, and as is often the case with too much time on your hands, snacking between meals.

Consumers are also proving less likely to try new restaurants, whether driven by less choice or simply being more risk averse. Households with kids are shifting the most, Datassential said, with significantly more change across almost all activities than their single counterparts.

There’s whitespace in this for restaurants, too. If your brand promotes a healthy-eating message, shout that louder than ever. People are going to get tired of eating food they can buy in bulk (pasta, rice, etc.) as this crisis drags out. Put the freshly made and ingredient-forward proclamation front and center.

“How have consumers’ daily routines changed since the onset of COVID-19?”

Cooking/baking “from scratch” at home

Skipping meals or working through meals

The restaurant number is obviously disconcerting. But remember this all changes rapidly. Comfort foods might lose some luster as time lingers and people start to mind their health a bit more. And it’s not the easiest thing right now to buy a lot of salad ingredients from the grocery store. At least not in huge quantities. So pay close attention to attrition as we move forward into April. People are likely to start craving what they don’t have easy access to already. And that’s where restaurants can play a critical role. (President Trump extended nationwide social distancing measures to April 30).

Datassential asked consumers what they have done to make mealtimes more interesting at home. These answers offer a window into some experience-fueled options restaurants could try to leverage.

“Meals have always been a social point at my house. Now, we just can eat more leisurely and outside [in our backyard] more often.”

Some brands have created do-it-yourself kits for consumers to make at home. Think about the time of year and stay on trend. Perhaps instead of just setting up a barbecue bundle for takeout, offer a seasoned platter, complete with directions, that customers can grab and throw on the grill. Like premade hamburgers from their favorite hamburger joint (you). That might just be a more appealing weekday option than trying to grab a pound of ground beef at the supermarket when everybody is wearing a mask and gloves and trying to avoid each other. It would, at the least, target an occasion that is one-night only. So people don’t feel as though they need to empty their bank accounts and buy everything possible when they brace for a grocery store visit.

“We try to eat outside when it’s not raining. Picnics. We’ve tried new recipes and baking some new stuff.”

Same deal. For the dessert chains out there, a similar vein of thinking. A cake in a box is an interesting element. Especially since many essentials, like flour and sugar, have flown off grocery shelves in a hurry.

“The entire family is helping with the meal, setting the table, and deciding what we can cook. Then sitting down before dinner saying prayers as a family.”

This sounds great, but will it be the case every day, all week, for the next month? Let’s ask this consumer again 20 days from now. What about a restaurant promotion like, “Tuesday Let Us Do It,” where a brand touts a home-cooked option that’s pickup-ready and built to go. This is where budget-friendly price points will be key, in addition to the messaging around fresh food. Some restaurants have pared down menus and put all-star options at the top. Presenting these in new formats, designed for a large group for example, could be a nice way to tap into nostalgia for a night. If people can’t go out anymore, give them a night out without leaving the house.

“We’ve been trying different recipes and meals that we find on YouTube or any other social media, such as an app that asks everything you have in your pantry and suggests meals from what you have.”

Why can’t restaurants do this, too? Now is the chance to have the corporate chef cook on YouTube and social media, and bring customers into the restaurant. It’s like an open kitchen in a socially distant world.

“Have had lots of ‘from scratch’ meals and have had movie and diner nights. Also have FaceTime calls with family to check in on them during meals or at all.”

A creative option could be a “refer a friend” deal. Sort of like when you get $50 for sending somebody to do their taxes at your spot. In this case, though, restaurants could offer a $10 gift card if you get someone else to order and use a specific code. And promote it as, “Dine with friends.” Include some messaging around grab a meal together, turn on FaceTime and enjoy (enter restaurant name)’s most popular dish without the cooking hassle. Together.

“We'd been eating keto but our grocery selection is limited and we've been bored, so we're eating what we want right now, cooking all the comfort foods we haven't eaten since the holidays.”

This is not going to last. It just isn’t. And restaurants can play a role in shifting that conversation back to normalcy by making it clear they’re still serving things like gluten-free, keto options from a kitchen you know and trust.

“Going to the supermarket is like the worst version of ‘Chopped’ you can imagine, so you have to get creative on what you buy and how you cook it.”

And this is only going to deepen as the amount of cases rise and going out in public becomes more troubling. 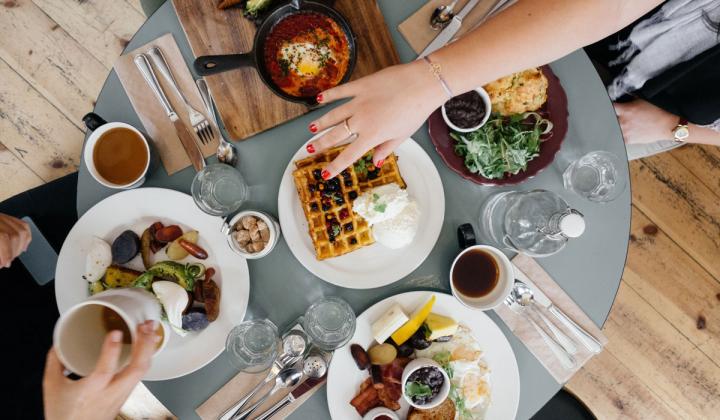 Some more steps to take

There’s undoubtedly a correlation between how restaurants act during this pandemic and consumer sentiment. How brands take care of employees and guests is going to last. It’s even showing up today.

“Which restaurants are consumers more likely to support.”

65 percent: Restaurants that donate their proceeds to staff/restaurant/delivery workers impacted by coronavirus

35 percent: Restaurants that donate their proceeds to first responders/healthcare workers impacted by coronavirus

Consumers want to see brands treat their own people and peers with respect and care. When given the choice, people said they would more readily support restaurants that donate proceeds to help staff impacted by COVID-19. Baby Boomers feel strongest about this (73 percent) while Gen Z shows the strongest favor of all age groups, toward donations to support healthcare workers (50 percent).

There’s some debate about whether or not restaurants should promote these kinds of moves. Does it seem self-centered to tout a CEO giving up their pay, for instance? If that’s a concern, find outlets to tell the message for you, like local media (and national). How you present the message is key, as always—with empathy and deliberation. But it’s something people need to hear during the crisis.

“These days, there isn’t anywhere to get food that consumers feel doesn’t pose at least some degree of risk,” Datassential said. Still, people need to eat. So far, as noted earlier, people perceive grocery stores and specialty retailers as less risky than restaurants. Fast food and C-stores are ahead of sit-down brands.

The overarching message of “don’t eat at restaurants,” appears to be sticking, which is why it’s so important to try to actively change it.

“There’s an opportunity for restaurants perceived to be in the riskier category to reassure customers with emphasis on carryout options and enhanced efforts around safety and sanitation,” the company said.

The Food and Menu Trends of COVID-19, and Why They Might Rejuvenate Casual Dining
Cracker Barrel Featuring Homestyle Prime Rib in New Heat n’ Serve Meal
How Barcelona Wine Bar Built a New Business During the Pandemic