As President-elect Joe Biden’s expansive stimulus proposal gets dissected from all corners, independent restaurants remain on the fringe. The Independent Restaurant Coalition and other organizations have spent months lobbying for direct aid, particularly in the form of the RESTAURANTS Act—a $120 billion revitalization fund that would run through the U.S. Treasury. The main difference between the Act and the Paycheck Protection Program is the latter funneled through participating banks, which left many operators in the dark. The “Accommodation and Food Services” sector garnered just 8.1 percent of PPP dollars last time around.

Biden has repeatedly called for direct aid for restaurants, noting in December, funds “should not be a loan, it should be a guarantee.”

Senator Chuck Schumer added: “We need to do much more for restaurants. We have bipartisan legislation to deliver the relief that’s truly needed, the RESTAURANTS Act, that regrettably did not make it into this legislation.” The bill had the support of 53 bipartisan senators and passed the House of Representatives in October.

In a statement following Biden’s outline last week, the National Restaurant Association urged officials “to consider greater inclusion of initiatives like the Senate version of the RESTAURANTS Act. Working together, this country can stop the growing number of shuttered restaurants and the millions of workers still without jobs.”

Despite calls for assistance, though, there appears to be a disconnect.

Congressional Joint Economic Committee Democrats released a report January 15 outlining COVID-19’s impact on independent restaurants and bars, and why direct aid is critical. Without it, not only could thousands of neighborhood restaurants shutter for good, but the entire makeup of restaurants in America might shift.

Penned by Congressman Don Beyer, vice chair of the committee, it notes “the pain has not been spread equally across the economy.” This is something independent leaders have tried to convey since March.

Where Restaurants Can Get Financial Relief this Time Around

What’s in the $900 Billion Stimulus for Restaurants?

The restaurant industry shed 2.5 million jobs since February—one in four of the 10 million jobs lost in the overall economy, the report said. To put that in perspective, if the economy as a whole suffered the same level of job losses as restaurants, we’d be staring down 30 million jobs gone. “More than 110,000 restaurants—about one in six—have closed permanently or long-term,” the report said, citing an Association statistic. “The situation threatens to worsen as new U.S. COVID cases exceed 1.5 million each week.”

In December, there were 2.5 million fewer people employed in food service and drink places than February. Or a 20 percent reduction in roughly nine months. Overall, the country’s workforce is down about 6.5 percent. So there’s a more than 13 percentage-point gap between America’s labor impact and the restaurant one.

Restaurant sales stalled in October as cases soared (down by 0.5 percent from September) and are expected to decline an additional 4 percent in November. Year-over-year, November is projected to slip 17 percent, according to the U.S. Census Bureau.

A more timely take, courtesy of Black Box Intelligence, saw comp sales fall 13.4 percent versus 2019 levels in December. Traffic fell 18.6 percent. The results were the worst since July and the second consecutive month year-over-year sales growth decreased by more than 3 percentage points compared to the previous one. This trend, which started in November, can be attributed to a combination of an increase in COVID cases and winter weather hindering outdoor dining, Black Box said.

Making the situation even more tenuous, independent restaurants are often small businesses that lack the cash reserves and access to credit larger operations enjoy. Association CEO Tom Bene previously said the average restaurant only has about eight weeks of cash on hand. This “makes going over a year with only a fraction of normal revenue untenable for many,” the report said.

Even with vaccine potential in the mix, (Biden’s plan does divert resources toward distribution), the near-term outlook for a lot of restaurants is simply dire. COVID deaths in December outstripped April deaths despite new therapies and knowledge of how to treat the virus. And as noted, more than 1.5 million cases are being reported weekly.

Naturally, this leads to stiffer mandates and restrictions from officials, but also a potential softening in consumer willingness to dine out.

Restaurant reservation data from OpenTable showed in-person dining has continually dropped since October and is now at levels not seen since July. Reservations at the end of 2020 were less than half of what they were the previous year.

Here’s a graph from the report, sourced by OpenTable. 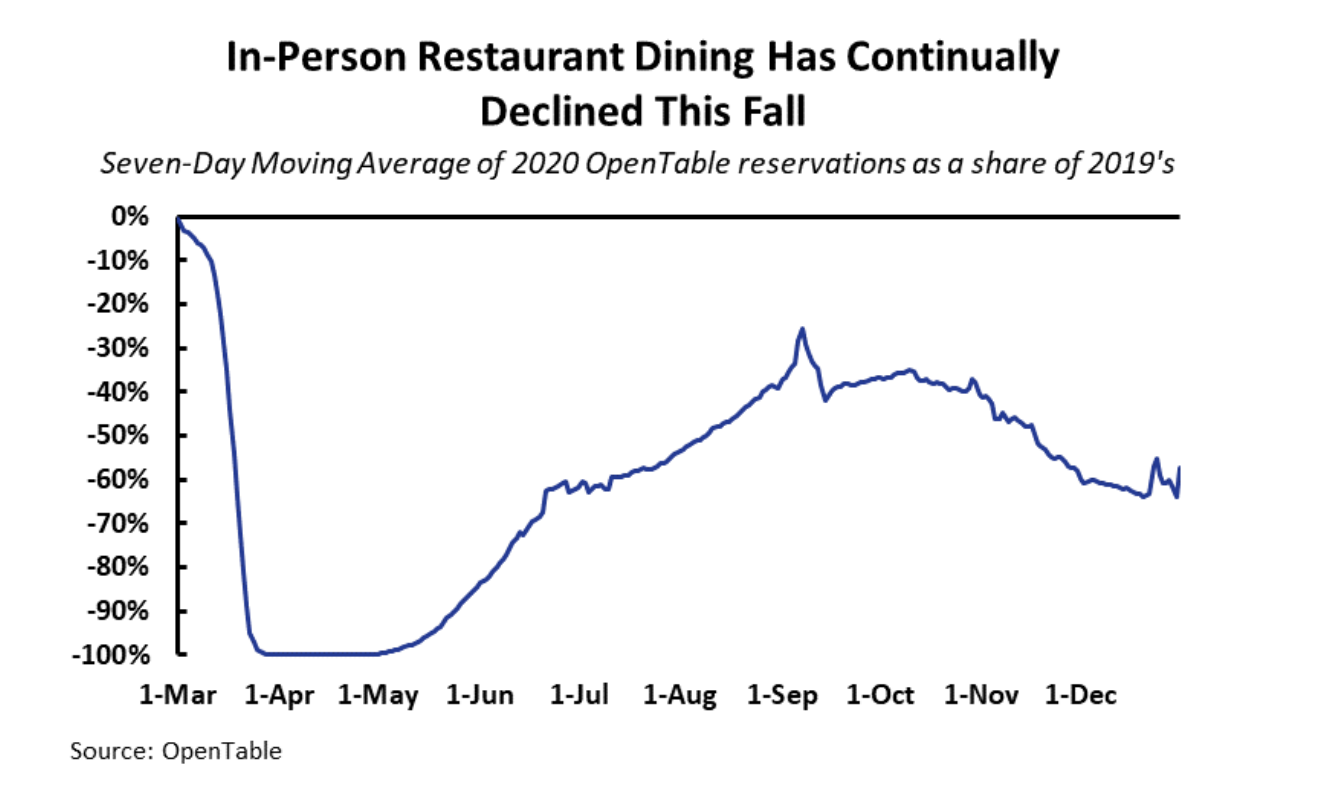 The report predicts Americans will further cut back on dining “to avoid the virus as weekly COVID cases exceed 1.5 million while cities and states place new restrictions on the size of gatherings if not limiting or banning indoor dining altogether.”

“These actions are deemed necessary to control the spread of the virus, but will place new financial pressures on restaurants and bars already reeling from the month-long impact of the pandemic,” the report added. “The industry was already bracing for coming cold weather this winter, which limits its ability to serve patrons in safer, outdoor settings, but the recent increase in cases and resulting public health restrictions has added a new, substantial challenge. The restaurant industry’s main hope for relief is successful vaccinations of the U.S. population, but that may not be complete until the fall.”

“Many small, independently owned restaurants will not survive without further relief. Americans will eventually begin to eat out again, but the question is whether the restaurants they eat in will be owned by large chains or small-business owners,” the report said.

“More support will likely be needed as indoor dining will be one of the last activities that Americans will feel safe doing. Investing in proven ways to expand access to credit for small-business owners will also help ensure that the small business losses resulting from COVID are not permanent,” the report said. “Unemployment benefits will need to be extended for several months beyond the December bill as millions of unemployed restaurant workers will have no other source of income when benefits begin to expire in March. Finally, Congress should support low-wage restaurant workers with an expansion of the Earned Income Tax Credit.”

Before COVID, the pizza sector was actually majority run by independents at 52 percent. Domino’s appreciated 20 percent share of the market.

The report explored some demographic concerns as well. In 2019, women accounted for 52 percent of restaurant workers despite accounting for just 47 percent of workers overall. Latinos totaled 27 percent of the restaurant workforce versus 18 percent overall. “Employment rates for women and Latino workers are thus unlikely to recover fully until the restaurant industry recovers. Perhaps even more concerning is the role that restaurant ownership plays in building wealth for marginalized groups, especially immigrants,” the report said.

Immigrants own 29 percent of all restaurants and hotels—more than twice the share of immigrant ownership of all firms.

“The mass closure of restaurants will wipe out the sweat equity of these immigrant small-business owners,” the report said.

The result will be a more unequal field with business shifting from small and immigrant-owned restaurants to larger brands. The report added more sizable chain restaurants will be poised to expand and obtain prime restate left behind from any rationalization, “potentially locking in a permanent and inequality-widening change in the restaurant industry.”

In other terms, without aid, the restaurant landscape could be disrupted for the foreseeable future, pent-up demand or not. And it’s something that will steamroll independents.

Reiterating an earlier point, the report said the PPP was just a down payment for what is needed.

“… indoor dining will be one of the last activities to return to pre-COVID levels and Dr. Fauci expects that normal activities will not resume until at least mid-fall. Therefore, the three and a half months of support in the bill is just a temporary bridge.”

Also backing an aforementioned concern, the report noted fewer than 20 percent of small businesses in NYC received a loan compared to more than half in Nebraska despite the fact the former’s COVID death rate was roughly 20 times greater.

One reason small businesses, like independent restaurants, struggled to access PPP was the reliance on financial institutions. This steered loans to larger companies that would make them more money in fees and favored businesses with whom they had preexisting relationships.

The report puts forth support for the RESTAURANTS Act, which would provide grants to restaurants equal to the shortfall in revenue between 2019 and 2020 and cover payroll, benefits, mortgage, rent, utilities, food, debt obligations to suppliers, and more.

Key is the fact the relief could only go to restaurants with 20 or fewer locations doing business under the same name.

“Another important way to support the recovery of small restaurants when the pandemic ends is investments in proven methods of delivering credit to low- and moderate-income Americans such as Community Development Financial Institutions (CDFIs) and Minority Depository Institutions (MDIs). The December bill includes important investments in these institutions and Congress should continue to help them support entrepreneurship in the recovery,” the report said.

Expanding on labor, Congresses passed an 11-week extension of unemployment benefits for the long-term unemployment and workers who do not qualify for regular unemployment insurance, while supplementing benefits by $300 per week. Biden proposed bringing that out to $400 and running it through the end of September.

“This action will ensure that many restaurant workers on unemployment can pay rent and buy groceries while the sector remains depressed. Nevertheless, the dire situation facing the restaurant industry will continue beyond the March expiration of these programs and will need to continue well into the fall,” the report said.

“Finally, too many restaurant workers before this crisis worked for low pay. One way to ensure that low-wage restaurant workers are not paid poverty wages is to increase the Earned Income Tax Credit, especially for workers without children,” it added. “Currently, the EITC is America’s second largest anti-poverty program after Social Security.  But the maximum credit for childless workers is only around $500 and is not enough to offset the federal tax liability of a worker making poverty-level wages. A large increase—as was included in the Heroes Act—would be an excellent way to reward low-wage restaurant workers for their contributions to our economy.”

Biden has called to bring the federal minimum wage to $15, but no timetable was floated.