courtesy of The Hampton Social

The Hampton social embraces the airy, beach vibe of its namesake destination location.

The Hampton Social Gets Back to What it Does Best

With seaside vibes and coastal bites, the brand offers an iconic dining experience.

For Chicago-based concept The Hampton Social, the name says it all. Not only does the restaurant embody the eats and atmosphere of New York’s seaside getaway, it also holds socializing as a central part of the brand experience.

“We try to encompass the transformational experience. When you walk into our venues, you’re sent to another place; you feel like you’re not in Chicago anymore,” says CEO and founder Brad Parker. “Why people really go out is for that social aspect, to hang out with their friends. I think COVID really showed people how fortunate we were to get to do activities like that.”

The pandemic may have curtailed on-site socializing and paused expansion plans for The Hampton Social, but now the brand is moving forward on both fronts. Founded in 2015, the micro-chain has grown to eight locations, across Illinois, Florida, and Tennessee. 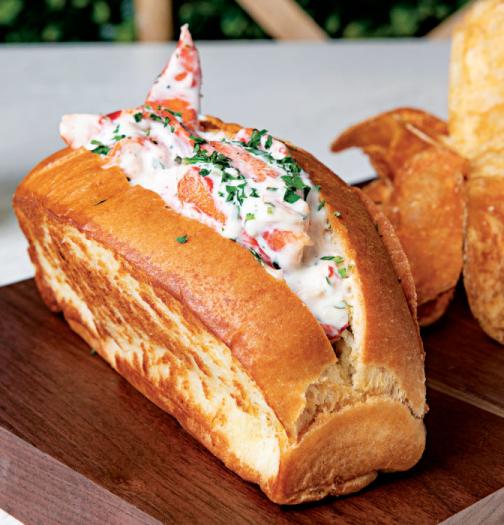 courtesy of The Hampton Social

From 2013 to 2015, Parker operated the Chicago outpost of Arizona-based American Junkie. He says the restaurant/club sported an industrial vibe and wasn’t necessarily a place he could imagine his five sisters choosing to hang out. As a result, he was very intentional in building the right aesthetic for The Hampton Social.

The core design features wall greenery, exposed brick, nautical flourishes, and an airy atmosphere, but each location also brings a bit of personalized flair, which Parker says is very much in the spirit of the Hamptons.

“One of the things I love about the Hamptons is that there are a lot of [items] created by local operators, mom and pops. … They do it themselves as a style, so we tried to do that, too,” Parker says. “We look at prefab stuff, but if we have our team do it, it makes it feel a little more authentic. And I think that lends the feeling of going to one of those oceanside destinations.”

Parker points to concepts like Tommy Bahama Restaurants and Bahama Breeze that left their mark by evoking vacation locales like the Florida Keys and the Caribbean. But the Hamptons had been overlooked as a viable theme for a restaurant chain, and Parker spotted an opening in the market. And with reality TV stars like the Kardashians and Real Housewives frequenting the area, the Hamptons’ pop culture prevalence has only grown over the years.

The menu is rooted in New England–style seafood, though Parker adds that its burger has been known to rival Au Cheval, a beloved Chicago diner whose burger draws hours-long queues. Lobster rolls may be the signature dish, but shareable plates are at the heart of The Hampton Social experience, with options like Cooper’s Beach Calamari, Crab + Shrimp Bruschetta, Tuna Tartare, and Chicken Lollipops.

“We took those iconic dishes and made them staples on our menu. And then we just built around that and created what we felt were coastal items, shareable items, and very social items. That’s another thing we want; the dine-in experience should be social,” Parker says, adding that the approach dovetails with consumers’ desire to sample multiple menu items. The brand also serves craft cocktails and weekend brunch with its own signature dishes and cocktails.

When Parker opened the first location, he envisioned it becoming a single-unit neighborhood joint in the bustling River North area. But it didn’t take long for him to see the growth potential. Within a month of its debut, The Hampton Social had lines out the door, and Parker had to hire security to help with crowd control.

In late 2017, the brand opened a second store in a Chicago suburb, and after that, expansion started to ratchet up. The Hampton Social continued to saturate Chicagoland while also planting flags in Naples, Florida, and Nashville; the latter store opened mere months before COVID-19 struck.

Despite the pandemic, the brand is already regaining momentum. In February, The Hampton Social opened its second Florida location, this one in Orlando and the reception was just as enthusiastic as ever, Parker says.

At press time, it had another store under construction in Delray Beach and pending deals in Miami and Tampa, among other markets.

Parker says that states like Florida, Tennessee, and Texas are particularly attractive given their tax advantages and pro-business policies. He’s also eyeing Arizona and the Carolinas and paying attention to ever-shifting consumer demographics.

“The younger generation is very lifestyle-focused, and I think it happened with the invention of Instagram,” Parker says. Young professionals used to gravitate to big cities, but peer photos on the social media platform have exposed them to smaller, emerging markets.

“They’d go check it out and realize that these places were awesome to live in, more affordable, and had better weather. … You saw these huge exoduses out of the major metropolitan cities and into the cities like Nashville, where there’s a huge boom starting. So we’re trying to focus on those areas that are growing like that,” he adds.

For Parker, expansion possibilities go beyond The Hampton Social. His umbrella company, Parker Hospitality, already includes the Bassment, a live-music cocktail lounge underneath the original location of The Hampton Social, and will soon add even more concepts. A Mediterranean-focused restaurant in the same elevated-casual vein as The Hampton Social is slated to make its debut before the end of the year.

In the meantime, the company’s original growth vehicle is aiming to ramp back up to opening four new stores in 2022 and later 6–8 per year, with a goal of hitting 20–25 units in the next four years. This year, sales are up over 2019, and Parker says much of the credit goes to The Hampton Social guests and staff.

“We’ve kept this growth going in light of what’s happened, and the only reason we’re able to is because of the support of our followers. Our customers have just been unbelievable. When we reopened, they bounced back and came out in full force,” he says. “Our in-house team has also been absolutely unbelievable. To see the unity and the team effort to get through COVID and everything that went on was amazing.”