Fifty-two percent of minority-owned small businesses could not pay August rent, nearly the same number as June and July.

Around 45 percent of restaurants couldn't afford to pay August rent, according to a new report by small business network Alignable.

The poll surveyed 5,349 small business owners from July 31 to August 25. In July, only 40 percent of restaurants said they couldn’t afford rent. This uptick is likely related to increased fears surrounding the Delta variant. Another survey of 1,000 Americans by Lisa W. Miller & Associates revealed 59 percent believe the impact of the Delta variant would “somewhat or significantly reduce their activities, a foreboding sign for restaurateurs.

Restaurant owners themselves were the most concerned about the Delta variant among other small business owners in the survey. Around 88 percent said they fear the Delta variant will slow recoveries, the highest amount of any group. Next in the list were travel/lodging businesses (87 percent), event planners (86 percent), and photographers (83 percent).

Overall there was a 5 percent month-over-month improvement in the number of small businesses able to pay their rent in August. While 30 percent still could not afford to pay rent in full or by the due date, this marked the first time in six months small businesses saw such a positive boost. Transportation companies, gym owners, and event planners saw encouraging trends, dropping 12, 5, and 12 percentage points month-over-month, respectively. 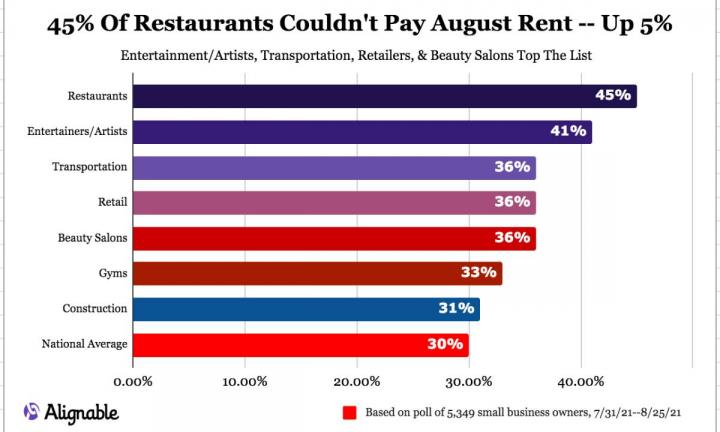 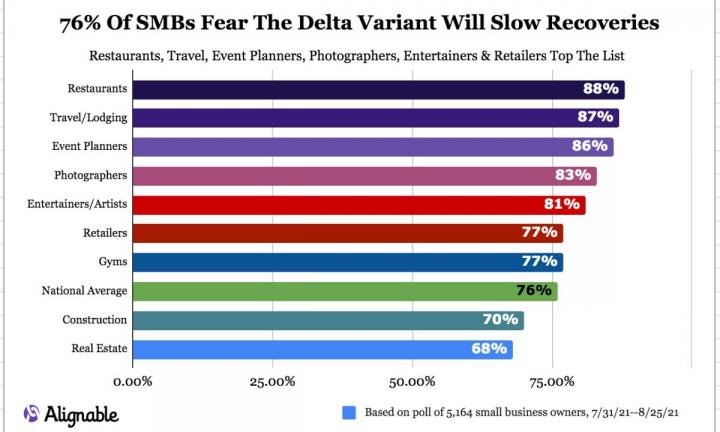 No matter the industry, minority-owned businesses continued to see considerably rougher economic trends. Fifty-two percent could not pay August rent, nearly the same number as June and July. Among women business owners, 37 percent had rent problems in July, which improved to 33 percent in August. Meanwhile, 31 percent of nonminority business owners could not pay rent last month versus 29 percent in August.

These trends reflect the inadequate amount of support minority-owned businesses received versus other small businesses. The $28.6 billion Restaurant Revitalization Fund originally prioritized restaurants owned by women, veterans, and socially and economically disadvantaged individuals. The fund saw more than 122,000 applicants from this priority pool. But nearly 3,000 restaurants and bars owned by these groups had their grant awards rescinded following lawsuits in Texas and Tennessee that called for the SBA to stop honoring the 21-day priority period for marginalized groups.

According to the Independent Restaurant Coalition, about half of all restaurants in the U.S. are owned or co-owned by women. However, women-led businesses received 12 to 18 percent fewer loans than the estimated makeup of women-owned businesses nationwide. And even though more than 60 percent of chefs are people of color, an AP analysis of PPP loans by zip code found that “thousands of minority-owned small businesses” were among the last to receive loans during the first two rounds of funding.