As always, it's hard to predict the future with COVID-19.

So has Texas. But what if cases also go up?

Georgia and Texas dominated much of the reopening headlines in recent weeks. They also appear to be witnessing the most dramatic sales swings.

Restaurant365 ran some exclusive data for FSR on the week-to-week trends following the states’ decisions to bring dine-in service back on line, albeit with limitations. This was the first period we were able to measure one opened week against another, as opposed to comparing dine-in sales versus to-go and delivery-only models.

Here’s a look at the snapshot:

And here’s a look at just dine-in sales. The “decrease versus last year” metric is one to highlight. It shows, on a broad—yet still young—scale how much restaurants are covering of their former business. Although it’s important to factor in the reality many restaurants decided to remain closed, or solely off-premises, despite restrictions being lifted.

On the question of open versus closed, and how many restaurants are embracing the option versus those who’ve decided to remain on the sidelines, Restaurant365 found the following:

As of May 9 (percentage of restaurants closed)

So the near-term evaluation across these three states is pretty even: Fewer closures, more revenue coming in the door. By itself, it’s not an overly surprising turn. What comes next, however, will perhaps be more critical down the road. Say months from now, instead of weeks.

The Institute for Health Metrics and Evaluation, which is a model favored by the White House, released a projection as Georgia was reopening. It assumed, even with businesses opening up, many residents would elect to stay at home and that summer heat would suppress the virus. With that, it revised its cumulative death toll figures upward to nearly 5,000 by August, an increase of more than 140 percent.

Other models said that if the IHME is wrong—and Georgians return closer to pre-pandemic ways, the state could see a case spike similar to the biggest hotbed markets. Massachusetts General Hospital, Harvard Medical School, Georgia Tech and Boston Medical combined on a projection that said if restrictions end, cumulative deaths could climb through July and then skyrocket beyond 10,000 in August if residents indeed stop sheltering in place after May 25, according to the Atlanta Journal Constitution.

And recent data suggests this could turn into a multi-layered scenario. The University of Maryland’s Transportation Institute used location information from smartphones to check on traffic numbers. It found that more than 62,000 additional people visited Georgia the week after shelter-in-place orders were lifted by Gov. Brian Kemp.

Certain businesses were allowed to reopen in Georgia starting April 24 (restaurants April 27). A week later, the data showed a daily average of 546,159 people traveled to Georgia from other states. That number includes 62,440 more daily trips than in the week before the reopenings.

Tennessee Gov. Bill Lee opened non-essential businesses just a few days after Georgia. Per the data, 11 percent of the 62,440 new drivers to Georgia were from Tennessee. The biggest jump came from Florida (17 percent), whose businesses were closed at the time despite some public places, like beaches, reopening.

This suggests something that could have significant ramifications come fall for restaurants and other business in places like Georgia and Texas. Meagan Fitzpatrick, an assistant professor at the University of Maryland School of Medicine, told the Chattanooga Times Free Press, the traffic data confirms what experts expected. “When one place reopens and the others do not, what you see is that people go from one place to another,” she said. “If you have a state that felt confident in its reopening because it felt that it was managing its epidemic, it is getting an influx of people from states that have not felt confident in reopening."

Essentially, a non-uniform approach could lead to a spike in cases, and not necessarily from the state itself. Gov. Kemp said Saturday the number of COVID-19 patients hospitalized in the state was 1,203 and the number of ventilators in use was 897. Both were the lowest figures since hospitals started reporting those numbers on April 8.

But Fitzpatrick referred back to the reopening dynamic and how this could spiral. “What could be happening is that people go to Georgia where they're more likely to be infected and they bring the infection home,” she said to the Chattanooga Times Free Press. “None of these states have a situation we would call controlled/ The infections are flowing now both ways. The problem is that it creates an incentive for a new transmission chain. People from Tennessee didn't have an incentive to go to Georgia to create that new social interaction, where before, it didn't exist."

Sense360’s most recent data backed up what we’re seeing. It found that the South has seen the largest decline in virus fears in recent days as lockdowns ease. 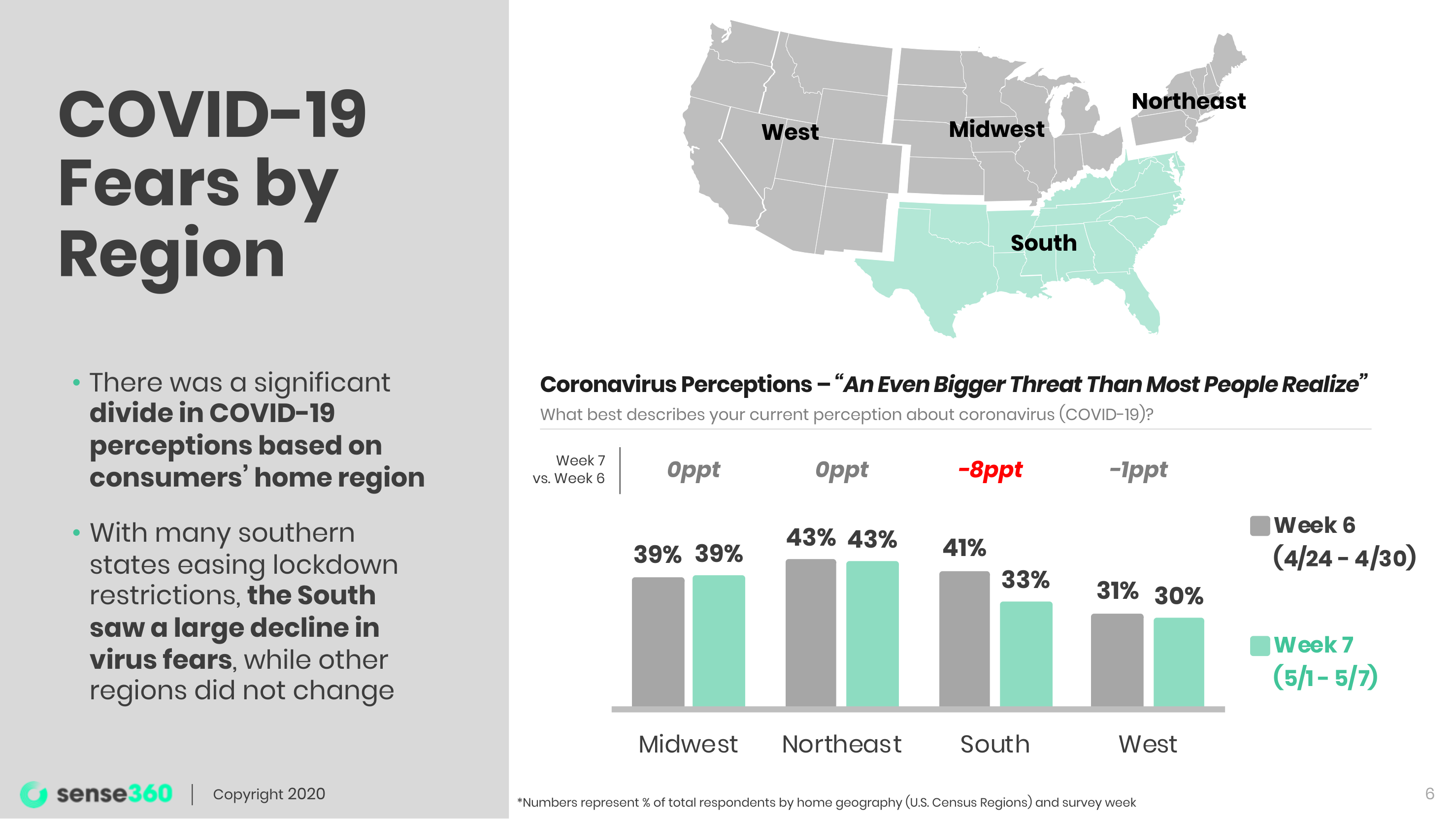 Here’s a look at just Florida. 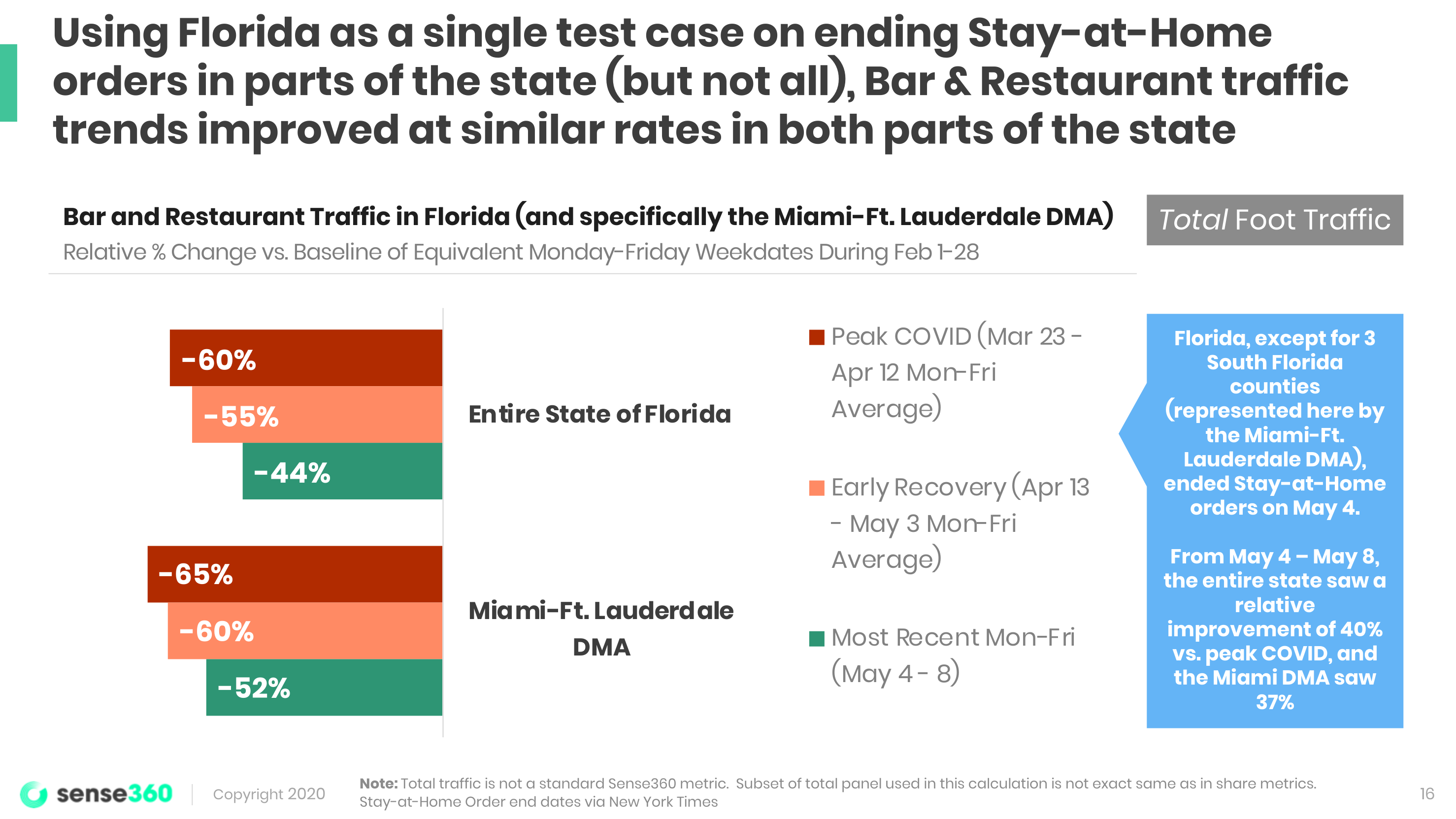 And a brand-by-brand view: 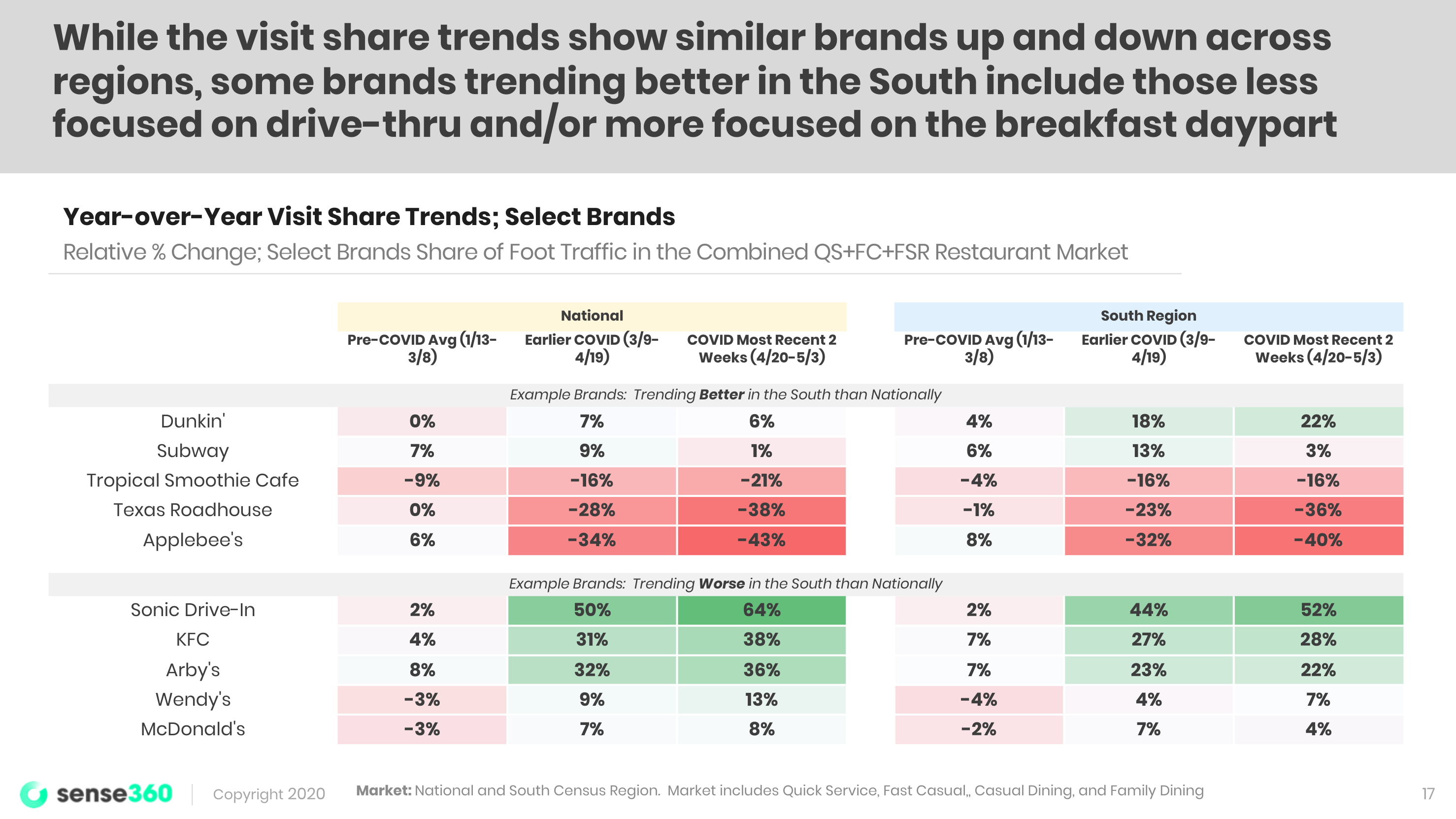 Another interesting data point to flash in recent days concerns Mother’s Day. QSR Automations said its end users reported their biggest off-premises day in history. While seated guests was still down 93 percent as of Monday, kitchen orders were only down 33 percent.

In this next look at day-to-day trends, QSR Automations used front-of-house guest traffic and kitchen transactions/orders being prepared. It shows a telling slice of how things are progressing. The figures are same-store, year-over-year seated guests and presents the decline in visits for on-premises dining.