In a recent survey, 25 percent of respondents said they expected to return to pre-pandemic dine-in frequencies in about a month.

Further Proof Dining Out is Making a Comeback in 2022

Consumer demand is picking up in more areas than one.

Even during the rockiest days of COVID-19, full-service restaurants held tight to a recurring theme—diners wanted to eat out again. Unlike historic downturns, the pandemic was unique in the way it stripped access instead of demand. Bank accounts and broader spending trends didn’t vacate seats as much as regulations did.

If you go all the way back to April 2020, a survey from Datassential asked respondents which of the following food and drink places they were most excited to get back to.

No. 1: Their favorite sit-down restaurant, at 41 percent.

Over the course of the next year-and-half-plus, the phrase “pent-up demand” joined COVID vernacular alongside terms like “new normal,” “unprecedented,” and “pivot.” But the fact it was tossed through the wringer, time and again, didn’t make it any less viable. In fact, each variant has essentially spun the same cycle. Reservations and sentiment drop when cases surge, and then demand erupts on the rebound. Starbucks execs spoke about this dynamic in early February. And there’s reason to believe omicron won’t only follow suit, but drop consumers’ guards faster, and potentially longer, than any variant thus far.

According to Black Box Intelligence, in the week ending January 23, restaurant sales growth improved “significantly,” returning to positive territory for the first time since the period ending December 19. Traffic growth, although still negative, also bumped compared to the previous week.

Alongside fast casual and quick service, fine dining turned in the best performance by segment. Dine-in sales growth actually lifted for every corner of the industry, with the biggest gains taking place among full-service brands, Black Box said.

As consultant Lisa Miller pointed out in a recent data pull, 54 percent of Americans said they were dining out less (or not at all) in mid-December due to omicron fears. Come January 17, it slipped to 49 percent. That 5-percentage point change, if you look at it broad stroke, would represent 10 million more people dining out versus December. Yet perhaps more notable, 25 percent of respondents in Miller’s data said they expected to return to pre-pandemic dine-in frequencies in about a month. So just as restrictions fall (mask mandates in California and NYC recently), it appears consumers are preparing to get back to some semblance of normal. And as the April 2020 data explained, dining at restaurants will always fall into that scope.

Research firm Sense360 looked to see if vaccine mandates and other conditions of late were influencing sit-down restaurant trends. They weren’t. 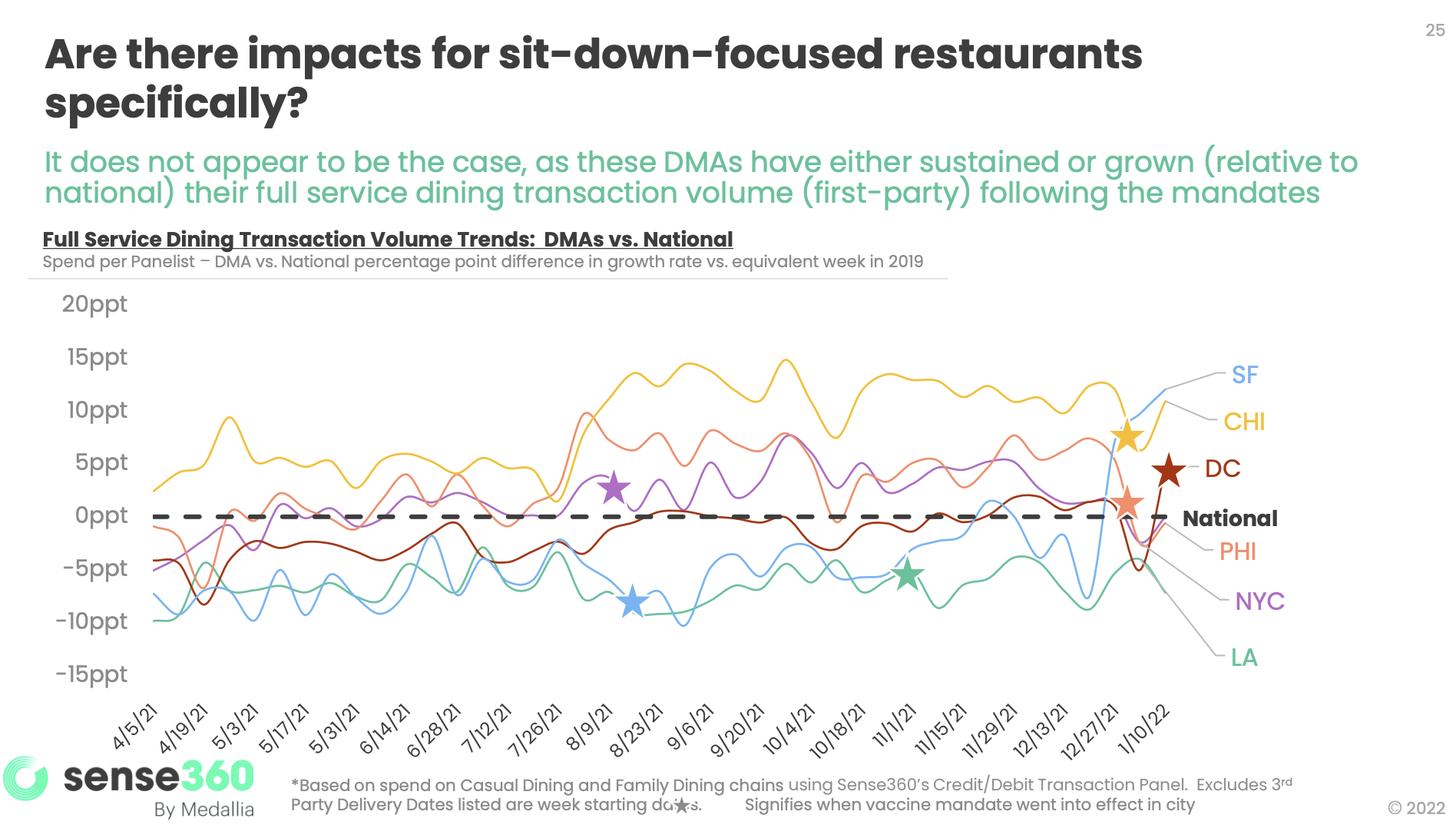 Datassential’s latest survey data showed 23 percent of respondents were “definitely” avoiding eating out. That has been in the 20s in four of the company’s last five dives (August 20, November 1, and December 2). The number was 68 percent in April 2020 and didn’t fall below 40 percent until this past April.

When Datassential asked operators what their top challenges currently were, only 12 percent said customers were significantly reducing how much they visit. (Sixty-two percent picked rising food costs and 43 percent ingredient shortage or unavailability. The next three issues belonged to labor—recruiting and hiring hourly staff at 42 percent; rising labor costs at 32 percent; and retaining hourly staff at 28 percent). Customers reducing spend per visit was even lower than visit frequency, at 4 percent.

Paytronix, in a recent report, presented another angle. Despite the pandemic’s continued disruption, total overall gift card sales in 2021 were up 22 percent from 2020, indicating a bounce back is indeed in progress. However, the number of cards sold remained 13 percent lower than 2019, suggesting plenty of opportunity is also left to chase. For comparison, year-over-year cards sold plunged 31.8 percent between 2019 and 2020.

Collectively, this hints guests not only are ready to dine out again, but they want to treat the occasion as a celebratory one.

It’s a trend in motion. At Olive Garden and LongHorn parent Darden, Sunday has become a legitimate sales day in its fine-dining division (The Capital Grille, Eddie V’s, and Seasons 52), CEO Gene Lee said last September. Those brands captured $168.8 million in Q1 business, a 24 percent leap versus pre-COVID during a late May to late August spell that traditionally represents the slowest of the year. Average weekly sales were $148,372, up from $79,223 in 2021 and $131,757 in 2020.

Cracker Barrel CEO Sandy Cochran also observed a “general consumer preference coming out of the pandemic for more celebratory, higher-check occasions than we are known for.” So did Ruth’s Chris Steak House CEO Cheryl Henry, who described it as a “pent-up celebratory occasion.”

In Paytronix’s study, fine dining saw the largest year-over-year increase in the average card amount, more so during the non-holiday part of the year. Per-card spending rose 89 percent and exceeded 2019’s average card load by 6 percent. Building on Darden’s observation, the desire to return to a fine-dining experience has proved enduring rather than seasonal.

Quick-service restaurants’ share of the gift card market fell by 9 percent versus 2021. At 63 percent, the far larger category still holds the biggest market share in gift cards. But the fact it’s sloping downward proves pre-COVID restaurant life is recalibrating to some extent.

There is evidence, however, of permanent shifts. Although the total number of restaurant gift cards sold in 2021 was 22 percent above 2020 figures, this did not unfold evenly across channels. Most were still off from 2019 highs.

Unsurprisingly, digital card sales were the notable exception. They clocked in at their highest figure in the years Paytronix has measured such data. In 2021, digital gift card sales rode a tailwind from e-gift cards, particularly for fine-dining restaurants. Not only have consumers learned to order food via digital, it seems, but they’ve also tapped into getting gift cards that way.

Corporate sales climbed, too (as people returned to work), and third-party sales and in-store sales made gains, yet remained down 19 and 14 percent, respectively, on a two-year view.

Meanwhile, corporate sales—generally a small proportion of gift card sales each year—made up some ground in 2020 and were just 7 percent behind their 2019 mark.

Diving deeper into the e-gift card movement, the average load of restaurant stored value in 2021 was higher here than physical cards for all service types, except for quick service, which didn’t change in any material way across the board. Fine-dining restaurants witnessed the biggest jump in average load amount on e-gift cards, up 89 percent, year-over-year. Fine dining was also the only segment to exceed 2019’s gift card sales, with a 6 percent hike.

Given holiday sales account for nearly half of take each year, Paytronix said, it wasn’t stunning to see the number of cards sold in the second of half of 2021 prove significantly higher (the same was true the previous two years as well). Cards sold from July to December of 2021 rebounded by 26 percent, year-over-year. That was 11 percent lower than 2019, yet still an optimistic point to latch onto heading into 2022.

From January to June 2021, the number of cards sold was up about 14 percent relative to the year-ago 2020 period.

The time between Black Friday and New Year’s Eve traditionally accounts for an average of 45 percent of annual gift card sales. May and June follow thanks to Mother’s and Father’s Day, and commencement ceremonies.

In this, too, recovery pulses. Gift card sales during 2021 editions of all three demonstrated a major rebound. The number of cards sold in May and June was up more than 54 percent compared to 2022. That represented 91 percent of 2019 gift card sales for the same two months, “indicating a healthy recovery from last year with potential for further recovery,” Paytronix said.

Last year, in-store sales reported the strongest performance of any channel, during both the non-holiday and holiday periods. They accounted for 44 percent of all gift cards sold from January through October and 46 percent in November and December. However, the proportion of in-store sales made during November and December in 2021 declined by nearly 10 percent over 2020, while all other channels saw year-over-year increases.

“We continue to watch a shift to e-gift and the role it plays in a complete guest experience. The rise of mobile apps, combined with loyalty programs that include such offerings as subscriptions and payments, along with rewards points, creates a much more frictionless guest experience,” says Andrew Robbins, founder and CEO of Paytronix Systems, Inc. “When all the pieces come together, they bring guests back more often, help them purchase more, and increase their long-term customer lifetime value.”