Outback planned to have more than 300 locations operating with limited dine-in service this week.

An Early Look at How Reopened Restaurants are Faring

And have we hit the COVID-19 sales ceiling?

Chains like Applebee’s, Chili’s, and Cracker Barrel restarted limited dine-in service over the past week or so, along with plenty of other restaurants. Meanwhile, some elected to wait. The Texas Restaurant Association estimated participation might split down the middle, with 47 percent of polled operators saying they were going to stay closed Week 1.

So, from a strictly data perspective, it’s a bit difficult to gauge how effective these restricted openings really were. Beyond the lack of uniformity, there’s also the simple reality we’re comparing against a void. And how customer behavior changes in the coming days and weeks, whether it continues to loosen or tighten (if more cases spike), is going to be vital to watch. The pared-down openings themselves are sure to influence this. Did customers get sick? Did they have a good experience? We’re going to know a lot more before June arrives.

One of the best recent examples, however, came from Bloomin’ Brands’ Outback Steakhouse. The company opened 23 locations for a week and saw same-store sales drop 17 percent, year-over-year. Meaning, even at limited capacity, units were doing 83 percent of typical business.

When you consider Outback’s comps plunged 60 percent or more for three straight weeks from March 22 to April 5, it’s a pretty alluring result. It suggests not just a positive recovery once restrictions lift, but real pent-up demand from consumers.

Data from Texas and Georgia, which opened dining rooms with restrictions on May 1, revealed full-service operators, on average, only took the reopening leap in about 40 percent of their locations in Texas and 31 percent in Georgia that day.

Restaurant365 has run week-to-week data throughout the crisis. It found, from Monday to Friday (in the week ending May 1), Georgia sales took off. Tennessee ticked up a bit. Again, this might be more revealing next week as we compare similar periods versus looking at one completely different (no dine-in service).

These two charts show delivery has grown from 5 to 10 percent of sales for restaurants, while takeout accounted for roughly 70 percent. Dine in is still about 20 percent of mix due to some states not imposing shut downs and restaurants that don’t separate their sales data. 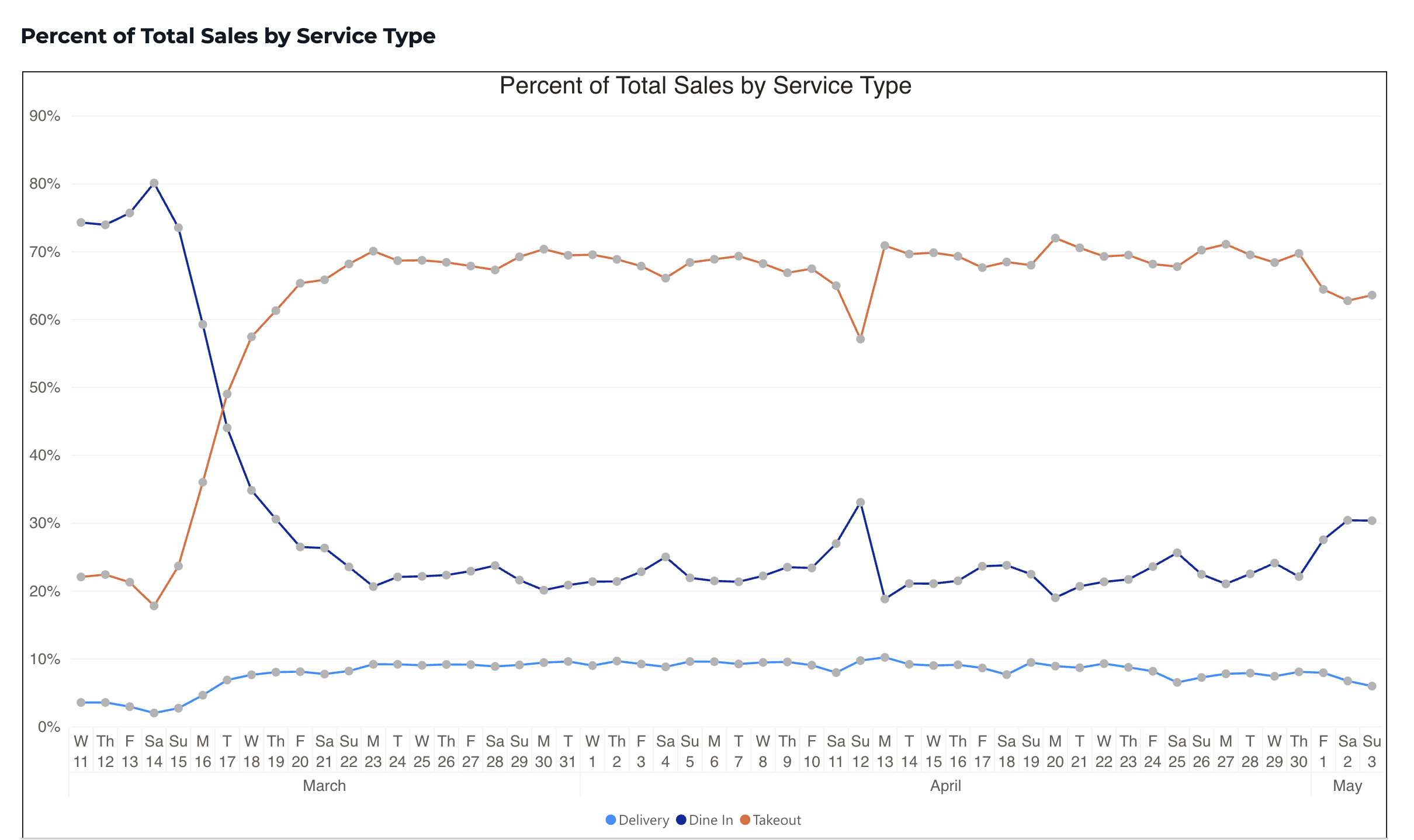 This below chart also shows that delivery and takeout have increased year-over-year in absolute dollars. Takeout is up roughly 50 percent, while delivery is up 45 percent. Dine in is down about 80 percent. 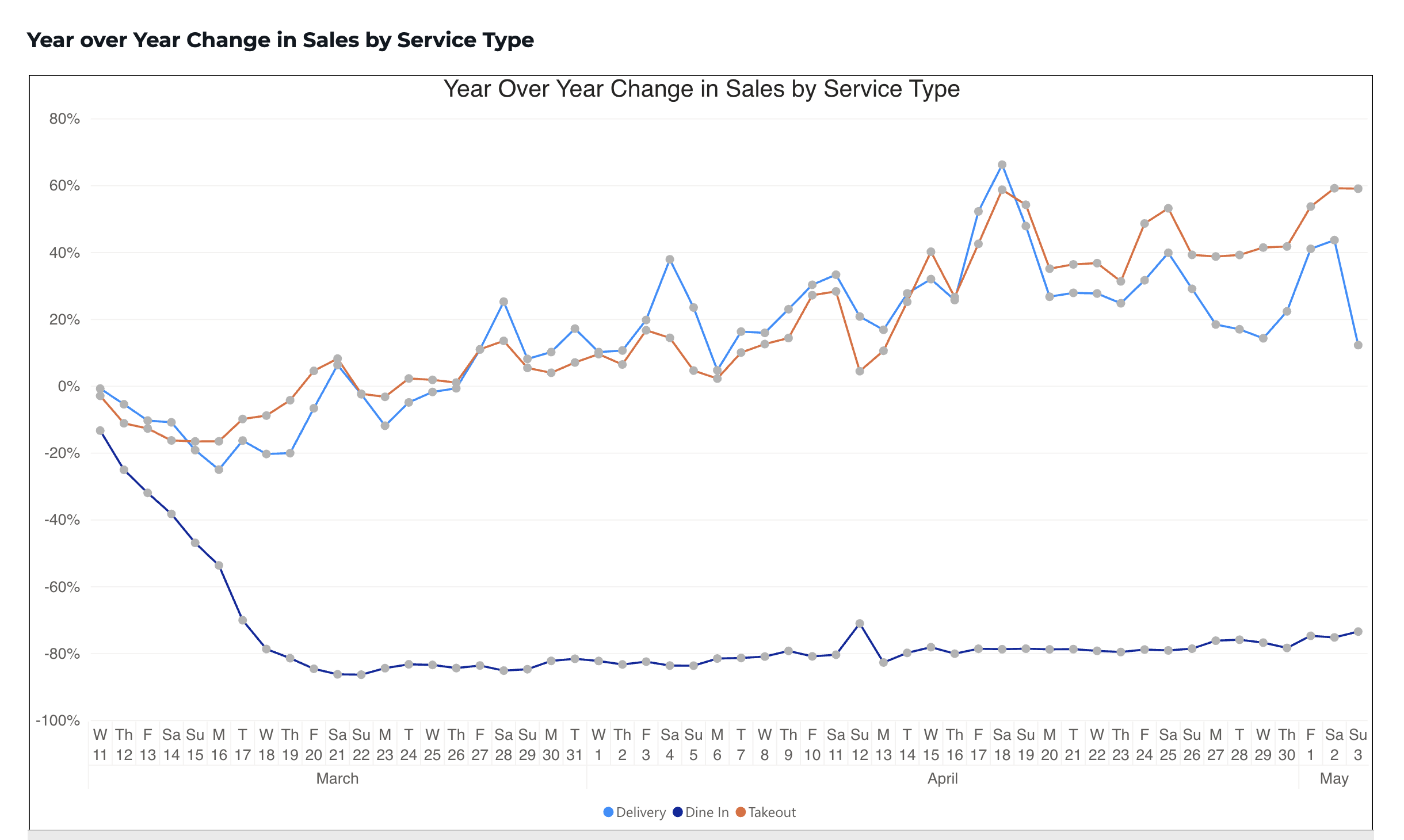 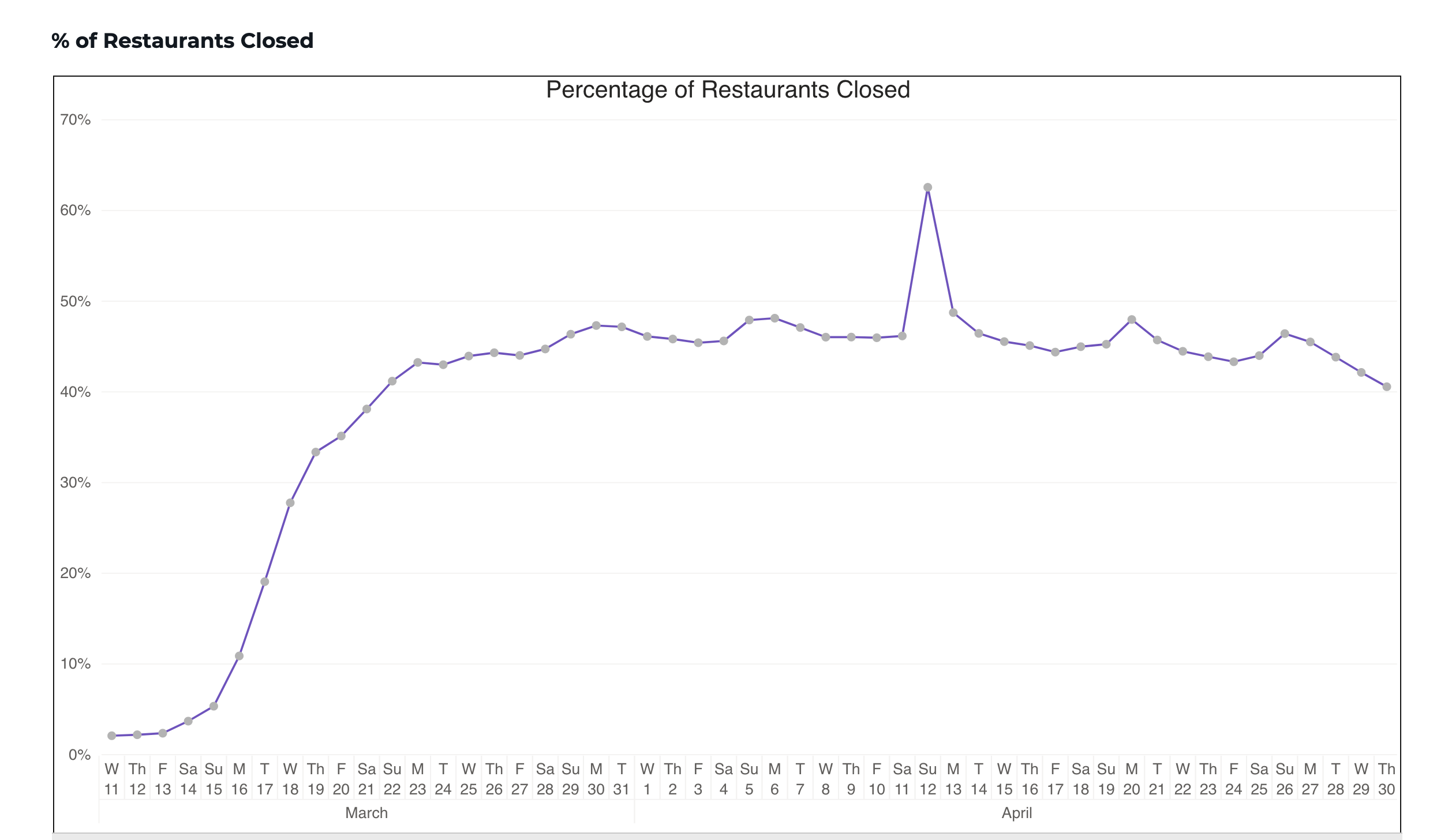 Black Box’s data leading up to April 26 illustrates another point: It appears the industry might have hit a ceiling in terms of its sales recovery. In other terms, without dining room business, this might be just about as good as it gets.

In the period, comp sales declined 47.2 percent. That was essentially flat from the previous week. For comparison, results improved each week by an average of almost 7 percentage points in the three week-period leading up. While mid-March might have been the COVID-19 bottom, this is the top, at least with takeout and delivery-only models.

Full-service restaurants continue to absorb the brunt of the coronavirus action, with same-store sales down 62 percent, year-over-year, last week. Limited-service brands declined just 17 percent versus 2019 levels. Fast-food restaurants in particular slipped less than 2 percent, making it the only segment closing in on pre-pandemic sales.

Average check per person, or per transaction, remain on an upward trend for limited-service chains. Fast food saw checks grow by 20 percent during the week. It was 16 percent for fast casual. However, guest checks are moving in the opposite direction for full-service concepts as beverage sales mostly exit the picture.

The NPD Group Thursday said drive-thru visits declined by 3 percent in March, but family or larger party size visits pushed dollars up by 2 percent and average eater check increased by 5 percent. That reflects something Wendy’s CEO Todd Penegor said Wednesday on the company’s quarterly review. He noted the brand is seeing more items per order coming in “as there is much more big orders happening as one person goes out to order food for everybody.”

So while visits might be down, the amount of food going out isn’t.

The simple fact is people who order takeout, especially digitally, don’t often add alcohol or beverages they probably have at home. Additionally, even if they do, it’s a much different experience than sitting in a restaurant for a while. They might order a drink to go with their meal, but the off-premises setup sapped the ability for servers to upsell more beverages throughout the course of a meal. One drink might be better than none, as far as restaurants are concerned, yet it’s still far worse than several.

Black Box also noted a decrease from consumers in “food” satisfaction for the average restaurant during the last three weeks as compared to before the pandemic. Food satisfaction has historically measured much lower for off-premises orders than dine-in business, when multiple factors enter the picture, like ambiance or great service.

While that trend isn’t surprising, overall off-premises mentions on Twitter and review sites have become more positive since COVID-19 began, Black Box said. This suggests restaurants are improving their execution in these channels. NPD said digital restaurant orders increased by 63 percent and delivery by 67 percent in March.

Black Box added, in this environment of uncertainty, guests might be more aware of value, even when interacting with upscale chains. Upscale casual and fine-dining restaurants have seen more positive "value" mentions in the last three weeks than they did for the first three weeks in February, as they increasingly meet guest expectations in this area, Black Box said.