While customers in the survey were able to point to specific allures of automation, many remained hesitant when it came to seeing automation at work.

Do Restaurant Customers Really Have an Appetite for Automation?

Guests know it's coming, and might already be here, but there are pitfalls to avoid.

It’s no secret restaurant operators were investigating ways to incorporate automation pre-pandemic, but the last couple of years forced many to adapt faster. Of late, it’s a counter to higher costs, from supply to labor and the search for efficiencies, to an effort to improve the work conditions of an hourly restaurant employee.

According to a 2021 “Global State of the Hospitality Industry” report from Lightspeed, 87 percent of restaurant leaders believe technology adoption was a critical component of their businesses’ survival during COVID.

The word “automation” itself, though, can be tricky when discussing its fit within the industry. While it can mean myriad things, like improved tech systems and the streamlining of menial tasks, it can also conjure images of robots replacing human workers. On the surface, the latter isn’t always what the customer wants to see. Or how brands want to position themselves, for that matter. Per a report from Big Red Rooster, released this week, 75 percent of customers still believe interaction with a human is a critical component of going out to a restaurant. 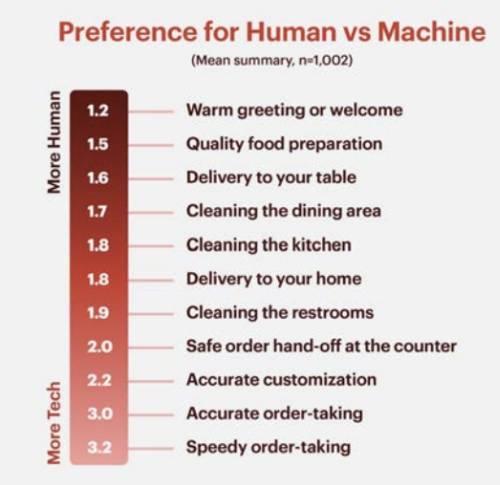 In the data, which came from an online study fielded March 11–13 of more than 1,000 consumers, respondents showed a preference for human interaction where it concerned the hospitality aspect of dining. Things like being greeted warmly, having food delivered, and cleanliness of the restaurant space were all areas where guests said they’d rather have some level of human interaction. Spaces where automation was preferred, however, were areas such as accurate customization and order taking, and the ability to order quickly.

Speed and efficiency were the two lead categories where diners saw clearly the benefits of automation. Fifty-eight percent said faster/speedier service was the top benefit of automation, while 57 percent noted fewer mistakes/human errors was a measurable win.

According to the report, older demographics such as Baby Boomers are most likely to want an interaction that incorporates a human element, while younger generations and men are more likely to report a higher level of interest in technology being using by restaurants.

While customers in the survey were able to point to specific allures of automation, many remained hesitant when it came to seeing automation at work. The report from Big Red Rooster showed a preference for automation behind the curtain. In other words, guests don’t necessarily want to see the action; only the results. A little less than a third (32 percent) noted they were OK with tech being used, but would prefer not to see it. Forty-four percent added they would be skeptical to observe automated robots in kitchens, with another 18 percent reporting they would feel a bit of “sadness.”

Interestingly, customers’ reasoning for embracing automation, at least partially, came back to wanting more personal interaction. Forty percent said they were open to robots that bus tables in order to free up servers, while 52 percent said a major benefit of automation comes from the technologies ability to free up employees for better service.

For example, 38 percent said, despite conflicting feelings, they were receptive to “on-stage” robots that run food to tables, like Chili’s “Rita the Robot,” which is a version of the Bear Robotics Servi server robot platform.

Openness to robots that:

Robots making tortilla chips and self-driving delivery vehicles aren’t the only examples of automation concepts are employing these days. Streamlined channels for ordering and paying have also relied on advances. When it comes time to pay, 52 percent of respondents in the study said they would participate in contactless payment through their smartphone. According to Visa, contactless payment grew more than 30 percent between 2020 and 2021.

Comparatively, fewer people are open to using QR codes to access a menu (37 percent), and roughly a third are open to digital solutions like lockers for picking up food (35 percent), AI-based ordering in the drive-thru (34 percent), and sending automatic notifications to customers’ phones when close by (34 percent). Only 18 percent of respondents said they would like to see a fully automated restaurant with no human presence at all.

Automation is also proving to be a determining factor when it comes to brand loyalty. Data from Big Red Rooster showed customers expect more tech innovation to come from places like ghost kitchens, fast-food restaurants, and fast casuals, while establishments such as fine dining, cafes, food trucks, and bars are expected to lean into experience, especially for guest-facing service. 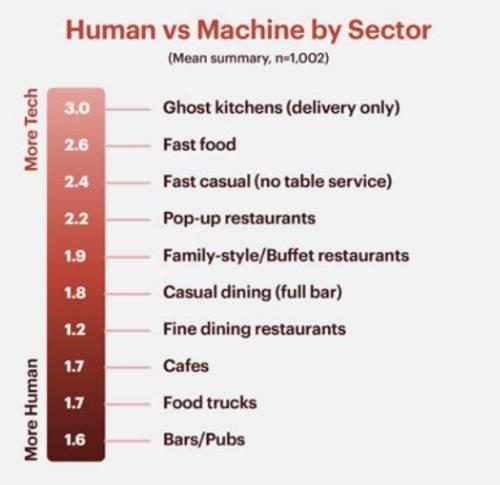 These expectations can impact how often customers interact with brands. Diners want frictionless service in their food orders, just as they do with retail, ecommerce, and Amazon, meaning if a brand/company can’t provide the ease a customer is looking for, they’ll turn elsewhere, like third-party platforms. According to Big Red Rooster, younger demographics are increasingly more likely to report being loyal to a delivery app compared to a restaurant. When it came to millennials, 38 percent said they were more loyal to delivery apps than restaurants, and 33 percent of Gen Z agreed.

“Never has loyalty been in such a perilous state for the restaurant industry,” the company said. The forced adoption of third-party apps like Uber Eats, Grubhub, DoorDash, and Postmates has solidified new behaviors and fueled new expectations around speed, intelligence, convenience, and yes—automation.”

“I am more loyal to my delivery apps than to restaurants these days.”

Boomers, on the other hand, were much more likely to remain loyal to restaurants versus an app. Almost three quarters (73 percent). Gen X wasn’t far behind, with 68 percent prescribing to the preference.

“I am more loyal to restaurants than to any delivery app.”

And one of the more telling stats from the Big Red Rooster report? One in four respondents expect to dine at a fully automated restaurant in the next three years (whether that’s their preference or not), a sign that indicates customers understand the changes afoot.

“Each new technology that’s introduced between now and then should be designed into the experience thoughtfully and strategically and in a way that benefits the restaurant, its human [and robot] staff, and its new and loyal guests,” the company said.