If you don't already, consider adding bundle options to your restaurant's take-out options.

When considering COVID-19’s impact on restaurant trends, it’s important to break off pieces that can be approached and tackled individually. Trying to grasp this goliath through a wide lens is a disservice to the diversity and nuanced nature of the restaurant business.

One clear place to start is demographics. What customer bases are being most affected by coronavirus’ rapid expansion? Supply chain innovator ArrowStream looked into some data recently around this topic.

Naturally, there’s a correlation between the age group the CDC identifies most at-risk, in terms of severity of symptoms, and what’s happening with restaurant traffic.

CHECK OUT OUR CORONAVIRUS LANDING PAGE FOR UPDATES

This past year, people aged 65 years and older made up 19 percent of all industry traffic. If you add to the 55–64 age group, you get more than a third of traffic, per ArrowStream.

As ArrowStream pointed out, the numbers immediately spotlight family dining, where 39.1 percent of patrons are over the age of 55.

And one thing you have to ask as an operator is how adept or willing this generation is to engage with off-premises expansion. It perhaps explains why the 65-and-older demographic mixed the largest percentage of restaurant traffic last year. Basically, they’re more likely, broadly speaking, to dine in than some younger generations, who gravitate toward convenience and technology.

According to Black Box Intelligence’s most-recent coronavirus report, third-party delivery is proving a challenging path for some given the very low adoption rates by consumers, especially those in older demographics. Only 4 percent of all consumers 18–24 years old placed a third-party delivery order the week ending March 6. The percentage was less than 1 percent for those 55 and older.

In terms of full service, combating the coronavirus storm isn’t always as simple as shutting the dining room and opening the drive thru, as counter-service giants like McDonald’s and Wendy’s have done. And many operators don’t court the digital journey like Starbucks does with its nearly 19 million Rewards member base. Mobile order and pay grew to 17 percent of total U.S. sales for the java leader in Q1.

So how can you appeal to this older, more traditional demographic? If they’re not already giving mobile and digital avenues a try, it’s probably a tough sell at this point to try to onboard them, en masse, in a hurry.

Black Box Intelligence found that nearly 70 percent of restaurant companies experienced a drop in traffic as of March 13. Eighty-five percent of upscale-casual and fine-dining brands reported a decrease.

A better outlet to push might just be take-out. As old-school as this might sound to some operators, make it easier to call in. Send them direct mail. Dedicate additional employees to the task. It could be a good way to keep some workers employed; to divert their typical tasks to order taking. Maybe the idea of punching orders into third-party tablets sounds more desirable suddenly than usual.

The key: Just make take-out as streamlined as possible for people to grab food from the restaurant. Not everyone is going to gravitate toward delivery. And not every restaurant is equipped to operate effectively and profitably through that channel.

Start with the message. Communication needs to be out there. When guests call to ask if the restaurant is open, be sure to note pick-up (and anything else) is available. Have answers to important questions at the ready.

Can I get the food without interacting with anybody? Sure, we have a counter set up where you can grab and go.

What’s your restaurant’s sanitation policy? Get specific. We ask everyone handling food to wear gloves and wash their hands every 30 minutes, etc. Sick workers are mandated to stay home at least two weeks.

All of these little things go a long way. Restaurants could even put someone at the door and have them open it when a guest shows up. Think of it as table touches for the social distant world. Showing your brand is considering everything is like a server previously saying, “Do you all need anything else? How did the food come out?”

And if possible, follow up. If you have email signups, or engaged Facebook users, now is the time to reach back out and ask how it went. Was there anything else I could do to alleviate your fears, or make the experience more enjoyable? 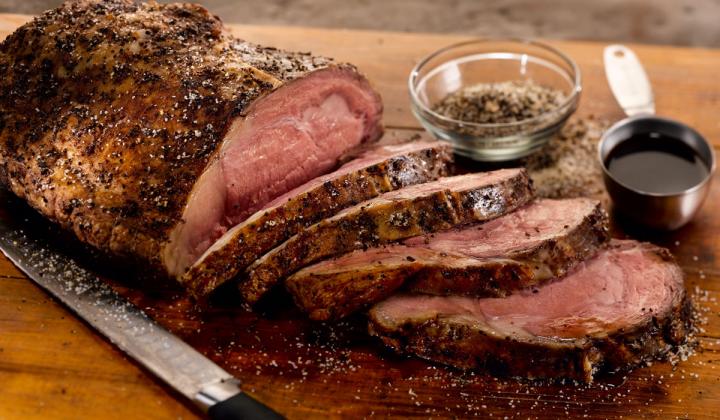 In Datassential’s recent 1,000-customer survey, a whopping 54 percent of people said they expected to decrease their visits to sit-down restaurants. On the flip side, 69 percent said they’d elect to eat at home, where they can oversee the sanitation process more closely.

So far, it’s been pretty steep. Per Black Box, consumers decreased their share of food spend at restaurants by 2.8 percent nationally and by 5.7 percent in Seattle during the first week in March.

One thing to keep in mind there is that those numbers will likely slide in the coming weeks. People are going to tire of a., cooking at home, and b., having to go to the grocery store to refill pantries. Firstly, as recommendations continue to lower the amount of people who should gather (10 or fewer is the most recent) heading to the grocer becomes a more risky proposition in customers’ minds than it once was.

Ordering delivery, though? There are far fewer parties involved, even if there is some mystery. Carryout/take-out aligns with that notion, but takes care of the second point. And it might just be a better fit, overall, for older consumers. If you follow ArrowStream’s data, catering to 55-and-above diners might end up being a critical initiative for full-service brands to steady the COVID-19 turbulence. Older generations have a reputation for brand loyalty millennials don’t. So, find a way to capitalize and tap into that sentiment, wherever possible.

As Liz Moskow explored in this piece, the truth remains that many restaurants are better equipped to feed people than other available options. That includes braving the crowds at the grocery store.

Restaurants jump through all sorts of loops, from Good Manufacturing Practices to HAACP plans to Serve-Safe, robust training programs, and so on, to ensure food safety.

Sharing that point with guests is vital right now. As is understanding that winning with take-out is not as easy as just flipping one light off and turning on another. Because if that patron ends up saying, “Well, this was far worse than when I dine in,” they probably won’t come back.

Of course, there needs to be some give and take, but restaurants that curate menus to meet this demand will have a leg up. Emphasize food that travels well. Some might even consider a carryout-out focused menu during the coronavirus crisis. A potential differentiated option is something people can cook at home, with instructions included. Like a meal kit from their favorite restaurant that they don’t have to subscribe to.

You’ve seen certain brands, like O’Charley’s, even roll out family-centric, more affordable bundles designed not just to travel, but to also ease economic worries. Bundles in general are a great place to start. Have options that feed entire families so people aren’t left ordering a la carte and running their bills up.

There are stories of fine-dining landmarks, like Seattle’s Canlis, redesigning entire business models. Canlis re-opened as a bagel shop, drive-thru burger joint, and family meal delivery service (bottle of wine included). As the landmark, which has closed only three times in nearly 70 years—the first when JFK was assassinated—said on Instagram, “Fine dining is not what Seattle needs right now.” The brand adjusted operations so it could dish out 1,000 burgers, 400–500 bagels and 200 to-go dinners per day. That to replace the 150–200 reservations Canlis normally accepted.

In flipping over, it added two fryers (donated from a supply company), a commercial mixer, and expediter Melissa Johnson started cooking bagels out of a shopping container in the restaurant garden. And Canlis deployed servers as delivery people. 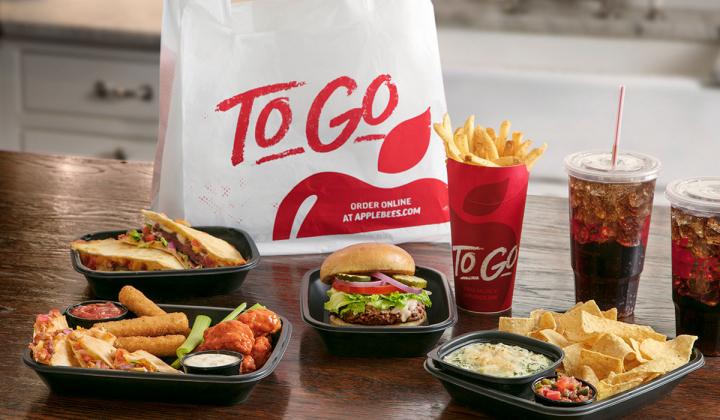 Applebee’s appreciated 32 percent growth in its off-premises business in 2018 and 22 percent this past year. Of the chain’s 13 percent mix of total sales, Carside To-Go accounted for 9–10 percent, or about 70 percent. Delivery made up the balance.

Bold ideas like this one are going fuel survival for some. According to new data from OpenTable, the percentage change in the number of seated diners at U.S. restaurants has steadily declined since March 1. For March 13, OpenTable said the figure plummeted close to 35 percent.

Black Box found that nearly 70 percent of restaurant companies experienced a drop in traffic as of March 13. Eighty-five percent of upscale-casual and fine-dining brands reported a decrease.

The situation doesn’t show any signs of improving before it gets worse. All said, COVID-19 brings a sense of serious urgency for full-serves.

Think outside the four walls in ways you haven’t before. Turn up email campaigns. Reach out through geo-targeted social ads. Pay for search. It’s critical to get these changes in front of diners so they can access them.

Put this information front and center on the website. Don’t let it look like business as usual, or make people search for clarifications on COVID-19 procedures. And while you’re sharing sanitation practices, consider explaining why take-out is a great option. Disposable silverware upon request. If you want, we won’t even include utensils or napkins (things people have at home and feel better about). If there’s a place for customers to suggest contactless delivery or pickup (put it outside my door) make that available, too. It would even be a nice touch to have employees ask about that over the phone. “Thank you. Is there somewhere we can put the food that would make you feel safest?”

Now might also be an ideal juncture to either hire delivery drivers or have servers take on the duty. Direct delivery could help protect margins as well as ease the concerns of customers who don’t trust, or aren’t familiar with, third-party services.

In that case, make sure you have uniforms and branding in place so your restaurant’s reputation shines through. If there are added fees, share those upfront. Say tipping is appreciated during these troubled times. Make it clear this is a different experience than ordering from an aggregator. Open lines of contact, like texts, so customers and drivers can exchange messages if need be. Since most restaurants aren’t Domino’s and don’t have GPS tracking, it’s an easy way to give people piece of mind with a process they might be unfamiliar with (again, older diners). And, also, make it possible so they can ask, last minute if needed, to make delivery changes, like drop the food on the front porch, for example.

Moskow offered this great suggestion: include a safety love note. Inside the packaged delivery (this could be with carryout, too), add a recap of the safety protocols and procedures restaurant staff went through to ensure customer safety. Thank them and wish them well. The battle for repeat users today is a whole different animal than it was a week ago.

Doing everything you can to win that difficult task is where the recovery begins.