Consumer Interest in Dining Out is Returning to Pre-Pandemic Levels

But will a spike in cases change that?

With COVID-19 cases rising and states backtracking, the future remains cloudy for restaurants. Yet there’s little question people want to eat out again. According to Google Trends data, analyzed by Chef’s Pencil, searches for “restaurants” and “restaurants near me” spiked in recent days. For some states, they’re even above pre-pandemic levels. 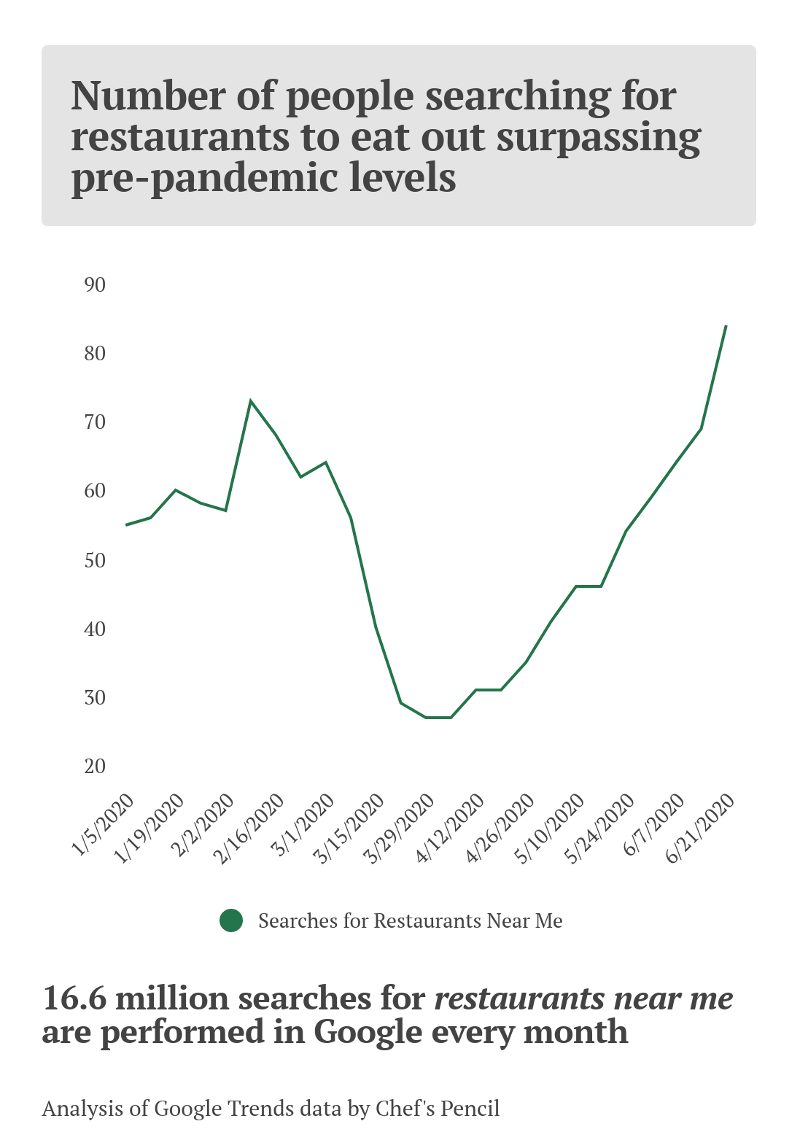 Another telling sign: online searches for recipes have turned the other direction. Fatigue is showing through. Searches were at an all-time high during the lockdown period, Chef’s Pencil said, surpassing holiday seasons. 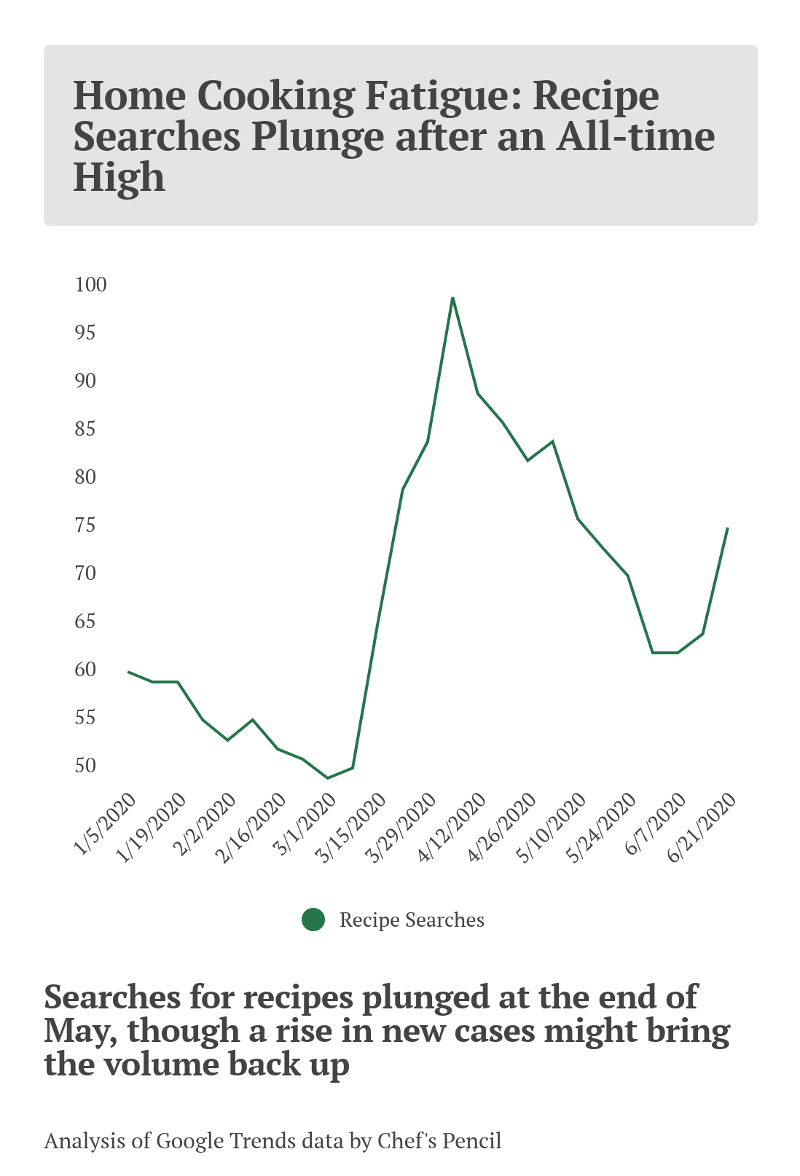 You can see at the back end of the chart, though, where a recent climb in cases might be affecting behavior. And this might be coming on stronger. Texas Gov. Greg Abbott Friday ordered a reclosure of all bars and mandated restaurants to roll back to 50 percent capacity from 75. Bars that took in more than 51 percent of gross receipts from alcohol sales were forced to close by noon, although they were still allowed to serve alcoholic beverages for takeout and delivery. Florida also paused alcohol sales on-premises for bars.

Globally, there does appear to be a healthy dose of wariness. A new global study of 11,000 consumers by Dynata, a first-party data and insights platform, noted that consumers globally are taking a wait-and-see approach, and will want control over their experience once they return.

This includes international, which brings a lot of variables into the picture, market-by-market. Here’s what is found:

When asked how soon they will return once restaurants reopen:

The top 5 things that make diners more comfortable were listed as:

In the U.S., the pulse of the current consumer state isn't quite reflecting the case spike to this point.

Yelp last Wednesday released its latest Economic Impact Report, which spotlighted some similar headlines as Chef’s Pencil. The data showed a quick shift in consumer interest over dining out. During the peak of COVID-19, the number of diners seated across Yelp Reservations and Waitlist dropped basically to zero. In early June, it bounced back significantly—now down 57 percent compared to pre-pandemic levels.

A correlation also emerged between restaurants that cater to group dining and those making a comeback, suggesting consumers are using restaurants to reconnect after quarantine isolation.

Dine-in, so far at least, evened the scales a bit and pulled trends closer to prior norms. But it’s still early. Is this sticky behavior or simply pent-up demand? Likely, the reality will lie somewhere in between.

For instance, even as people return to restaurants, the increased interest in takeout and delivery hasn’t waned much. Yelp said takeout and delivery continued to sustain interest on its platform, up 148 percent based on consumer interest relative to pre-pandemic levels. It’s also seen a 10-times increase in searches for takeout since March 10.

We’re looking at a very different field of restaurants as well, with fewer choices overall. Compared to March 1, Yelp said nearly 23,981 restaurants are now marked temporarily or permanently closed. Of those, 53 percent fall into the latter category.

This is a rough figure since restaurants on Yelp need to actively list themselves as closed or permanently closed, but it still illustrates how much disruption is taking place in real time. 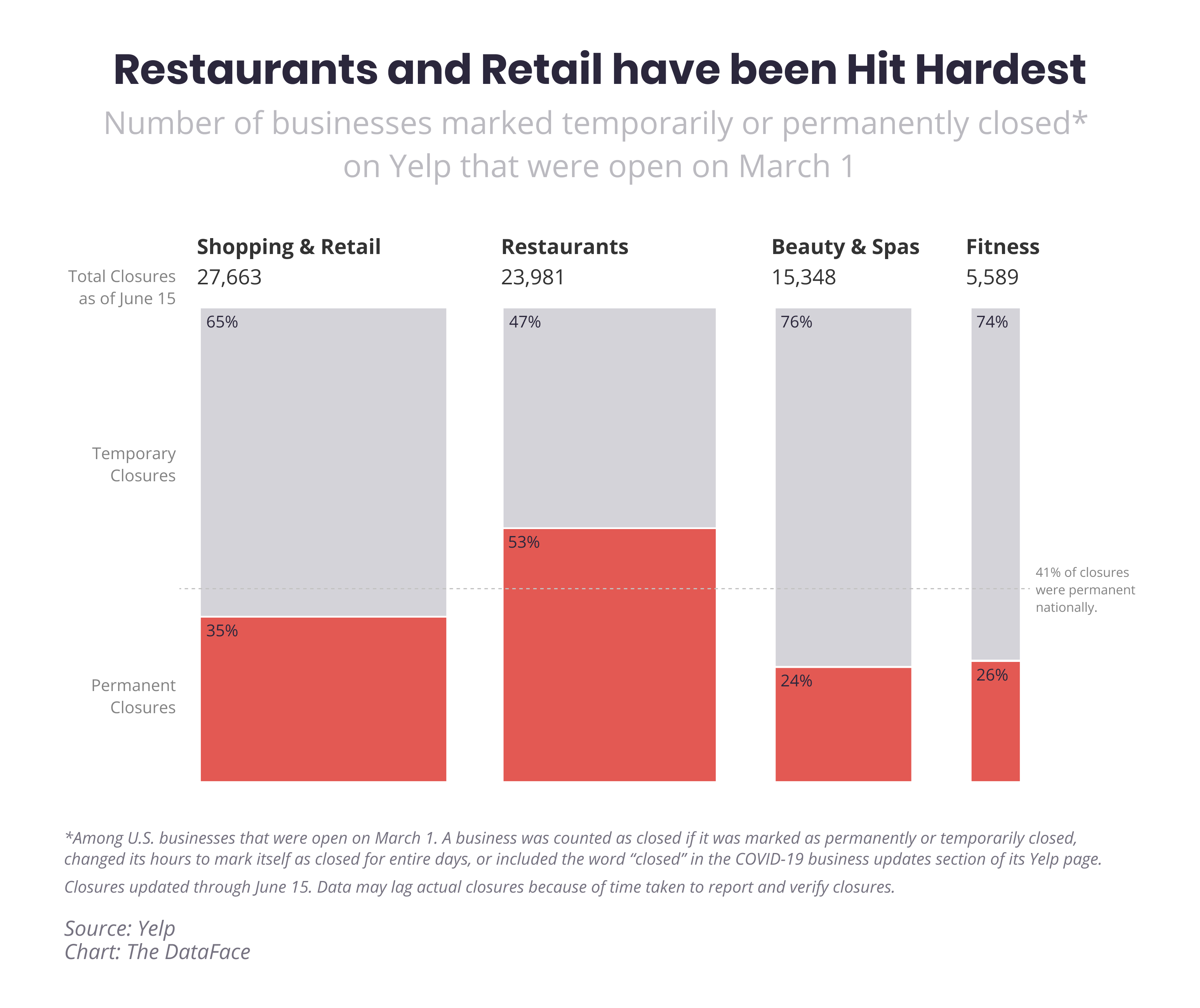 But for those welcoming dine-in business again, they’re finding willing guests. Some 16.6 million searches are performed in Google every month by patrons looking for restaurants nearby. Of the data points available, it’s a pretty reliable indicator of the nation’s interest in dining out. It might not guarantee foot traffic or actual sales. However, the fact consumers are exploring options again is a sign they’re either dining out or working their way to getting there.

Google Trends data also shows consistent seasonal patterns over the years with the volume of searches high during the late spring and early months, dropping in fall, then peaking in December.

Since COVID-19, however, traditional trends evaporated. Searches fell to a record low—half the normal pre-Christmas slump—at the end of March, Chef’s Pencil said.

Since the middle of June, there’s been a steep surge in the number of people looking into dining out, nearing figures you’d expect to see in pre-virus times.

This has been most pronounced in South Carolina, followed by Florida, Georgia, Tennessee, and North Carolina. Not surprisingly, these are the states with headline reopenings in recent weeks. They’re also surging in COVID-19 cases. 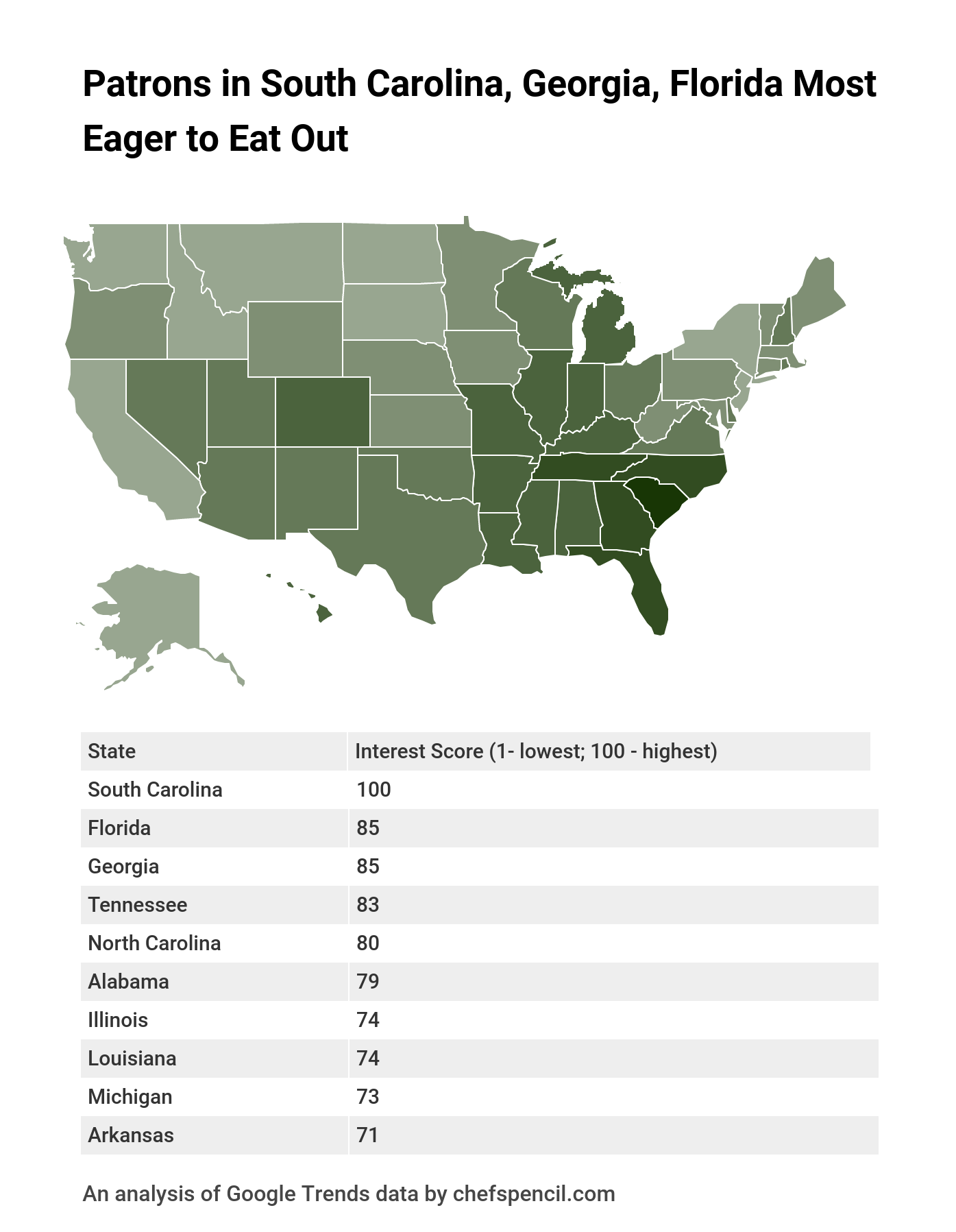 More cautious markets, like New York, are on the other side at 43. California, Alaska, and Montana scored 45. North and South Dakota 46. 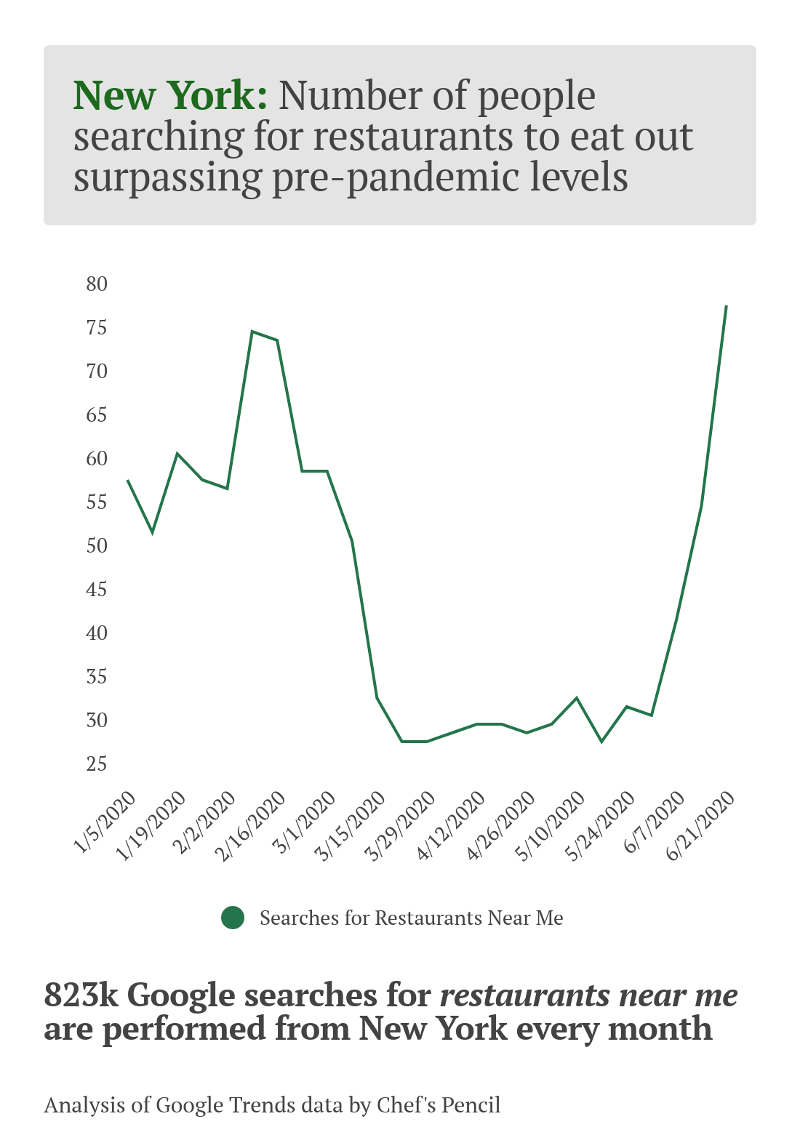 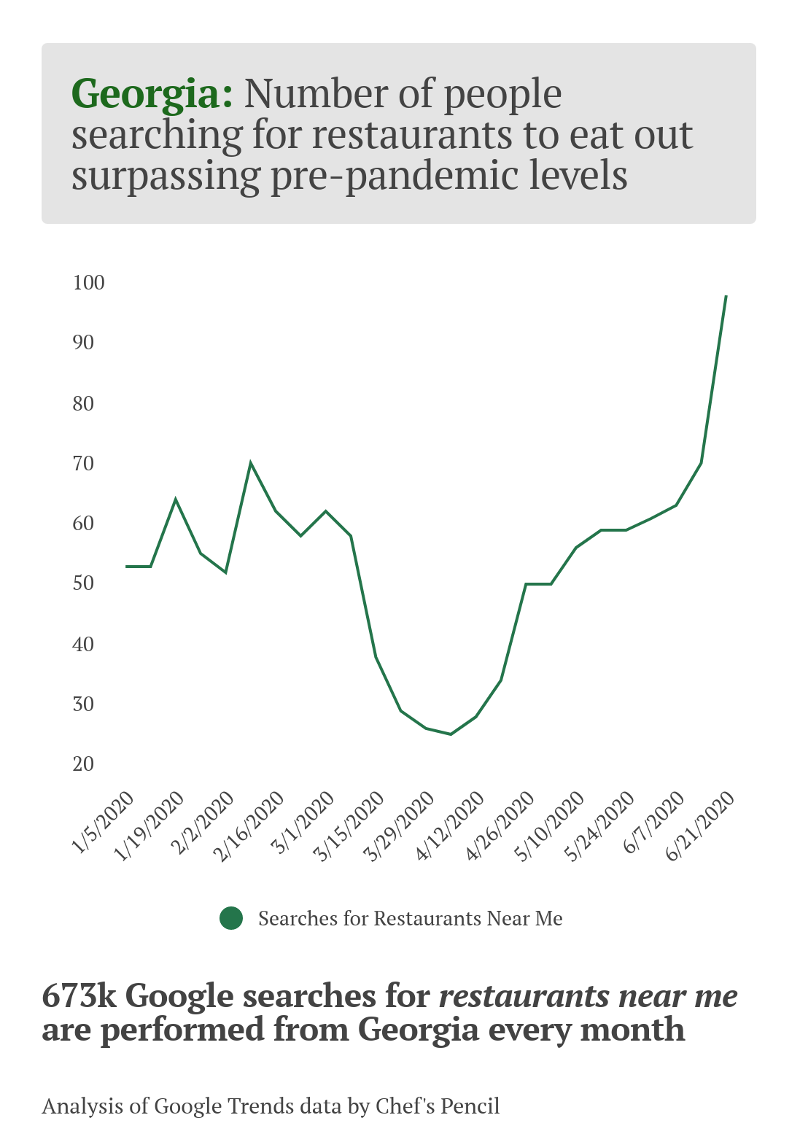 All of this is stirring a good news-bad news debate across the industry and country. For a lot of restaurants, this uptick in business has kept the lights on and provided some much-needed hope.

However, it’s difficult not to connect the dots between states where people are going out more often and COVID-19 case growth. The result, in a lot of situations, is restaurants reopening just to close again.

As pointed out by Eater, Nothing Bundt Cakes closed two locations this past week in California’s San Gabriel Valley after employees tested positive. Workers at five restaurants in Las Vegas contracted COVID-19, forcing operations to shutter, sanitize, and test, which carries a sizable cost. This is happening in multiple markets.

“Restaurant workers are understandably desperate to get back to work, though some are concerned about being exposed to the virus,” Chef’s Pencil’s Caroline Williams wrote. “But opening and then closing does nothing to create confidence in the sector or job security.”

Like most brands, February was off to a decent start, year-over-year, thanks to the leap year. But then March arrived. May saw some recovery (visits upped at least 10 percent compared to the prior month for each brand) as the economy began to reopen. 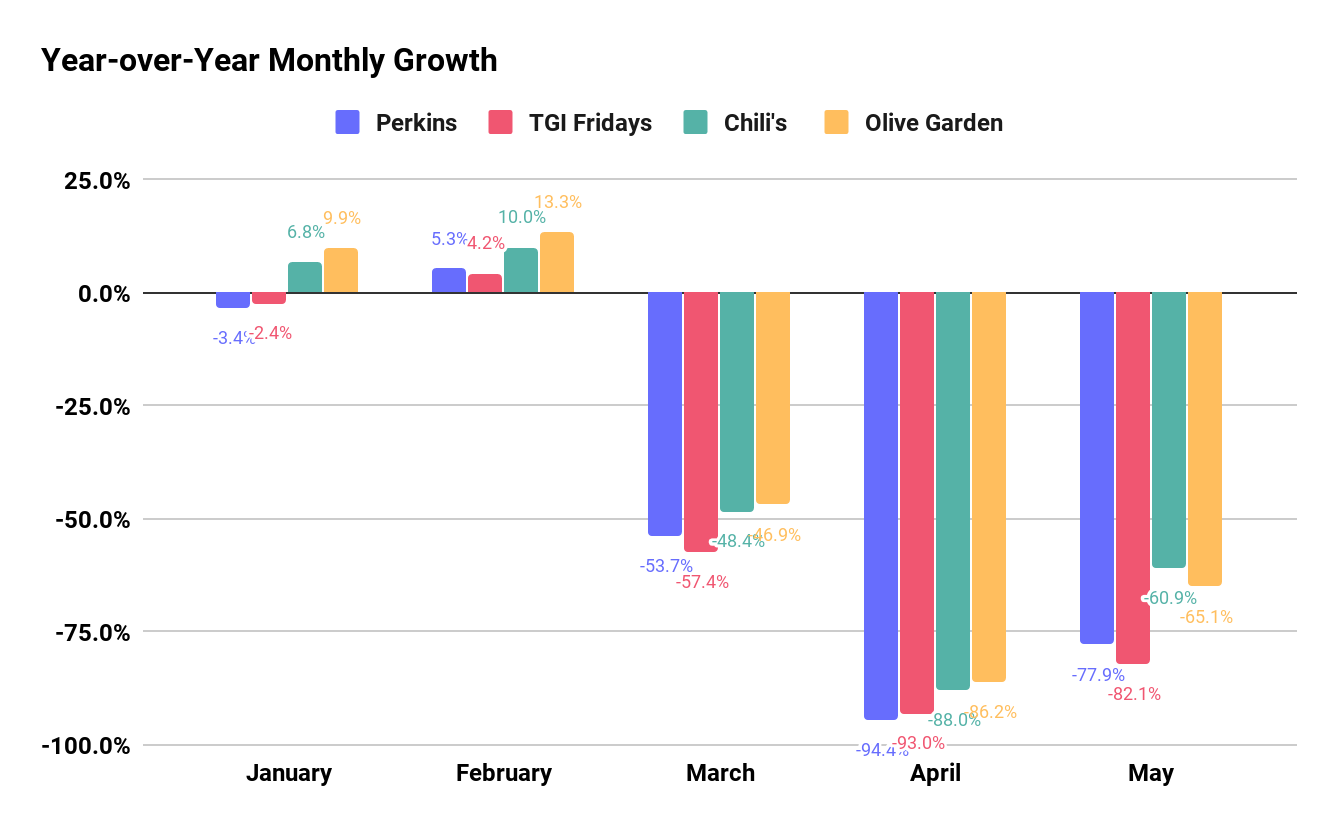 This following year-over-year data, though, shows a resilient consumer. Each brand witnessed improvement in terms of year-over-year change, from April 28 to the first week of June. While numbers remain low, visits are inching closer to standard levels. 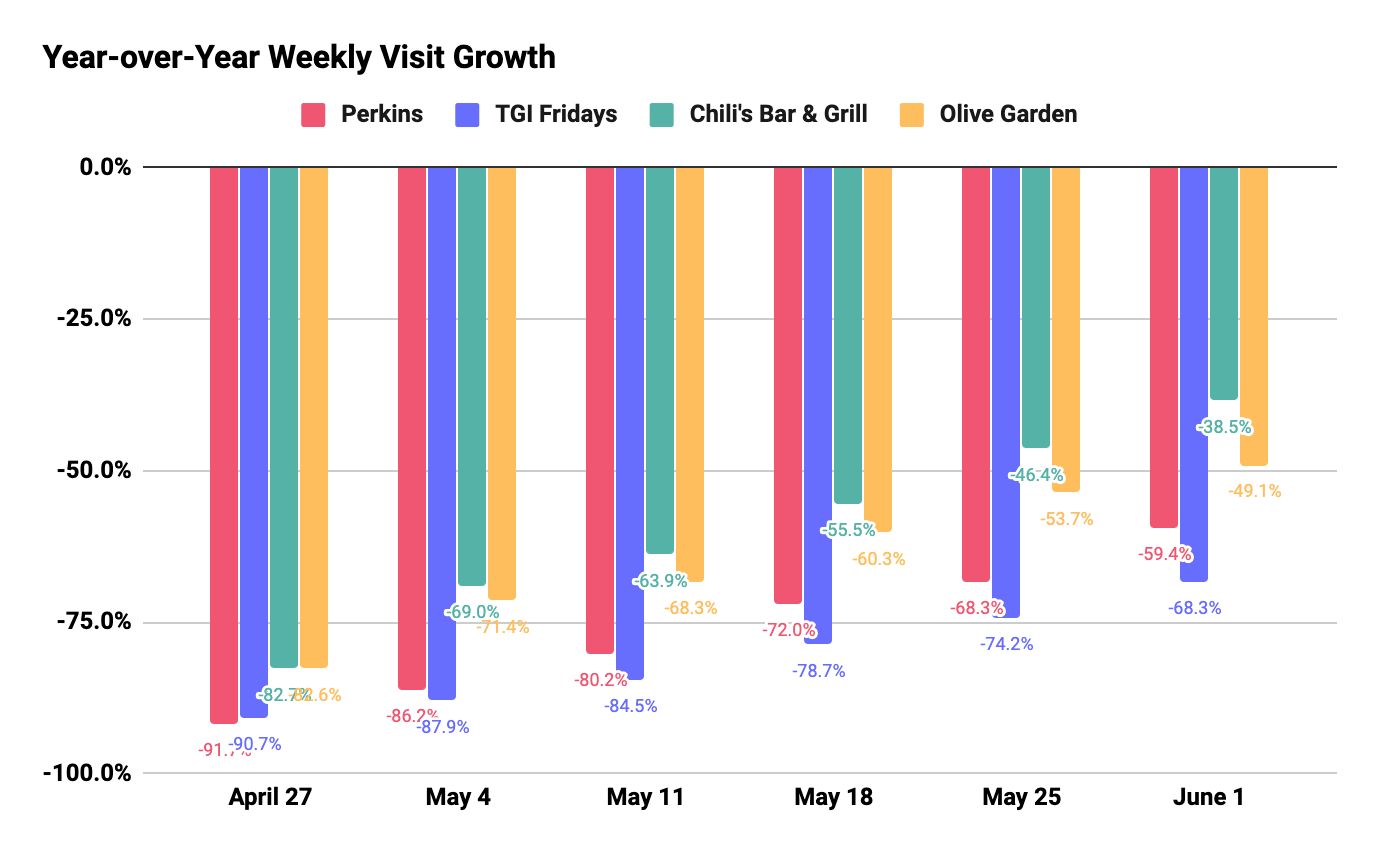 In the week of May 25, visits for Chili’s and Olive Garden pushed closer to the mark with traffic declining 46.4 and 53.7 percent, respectively. Even with a shortened week affected by Memorial Day, growth increased from the previous week. The week that began June 1 generated the most impressive numbers so far.

“Looking at the overall dining sector has also continued to show weekly improvements year over year change numbers and the economy has begun reopening. And although many states still have tight restrictions surrounding the restaurant industry, the nationwide trend shows a very strong outlook,” the company said.

In sum, people want to dine out again, and they are. But are we headed for some near-term softness from case spikes? Is that a risk restaurants need to take? As always, plenty of questions await.