Commander’s Palace, and the ‘Spirit of Hospitality’ After COVID-19

How will fine dining evolve in the coming days and weeks? One of America's most legendary restaurants tries to prepare.

Imagine one of America’s most iconic fine-dining restaurants, but you have no idea if your server is smiling. Customers aren’t breaking bread. There might not even be anything on the table, like salt and pepper, and so forth.

For all restaurants, life after COVID-19 will be an entangled, messy world of possibilities. We have no idea. And even if we try to guess, it might change by the next press conference, announcement, or wild rumor.

Yet this reality is amplified at fine-dining venues for a bevy of reasons. None more important than the obvious one—they have historically and traditionally charged consumers a premium for something stripped away by social distancing: elevated hospitality.

This isn’t a complex matter, although it’s massively disruptive. Fine-dining concepts rely heavily on beverage attachment and alcohol sales, as well as tips, to counter razor-thin margins that are especially pronounced in a segment that generally needs more staff and grapples with stiffer overhead.

Dressed down to the basics, fine dining, for the most part, does not translate to off-premises expansion. Even before COVID-19, many upscale concepts side-stepped delivery and takeout. Their food wasn’t meant to travel. In certain cases, it wasn’t financially feasible to even open that channel. But perhaps more importantly, delivery and takeout from a fine-dining restaurant presented a poor representation of the 360-degree experience that justifies the price tag. These operators didn’t want the incremental business since they didn’t survive by order volume. A new guest introduced to the restaurant this way wasn’t going to get the intended impression—a circular experience the chef and/or restaurant have spent years perfecting.

This is why so many fine-dining spots decided to simply close until restrictions lift. It’s preferable to offer no experience over a watered-down one. Financially, for some, it might be the only real option considering the costs involved in making food and paying staff without alcohol involved.

In late March, 44 percent of fine-dining operators told Datassential they were “closed completely.” Of those still open, average sales were down 82 percent and 72 percent said they laid off 75 percent or more of their staff. Only 4 percent said they avoided staff cuts.

Darden revealed in its most recent review that its fine-dining brands, Capital Grille and Eddie V’s, witnessed year-over-year sales declines of 86.3 percent in the week ending April 19. Starting March 15 and looking forward, no week performed better than negative 76.3 percent (period ending April 12), and every other seven-day segment was north of negative 85 percent.

Commander’s Palace has sat docked in New Orleans’ Garden District since 1893. After giving to-go business a shot for roughly a week (the first time in its history), the legendary aqua blue restaurant hit pause. Co-proprietor Ti Adelaide Martin says the decision boiled down not so much to whether or not customers embraced it—they did—but to the emotional temperature of employees. “At the very, very beginning, our instinct was we wanted to stay open as long as we could and take care of people,” says Ti Martin, the daughter of the late “grande dame,” of New Orleans, Ella Brennan. “We would get together every day and as we were setting up to do business and figuring things out. Literally one day everybody was all in and almost overnight they were not all in.”

“I think we just all really came together and realized we were not being correct. We weren’t able to distance enough,” adds Lally Brennan, Commander Palace’s other proprietor and Ti Martin’s first cousin. 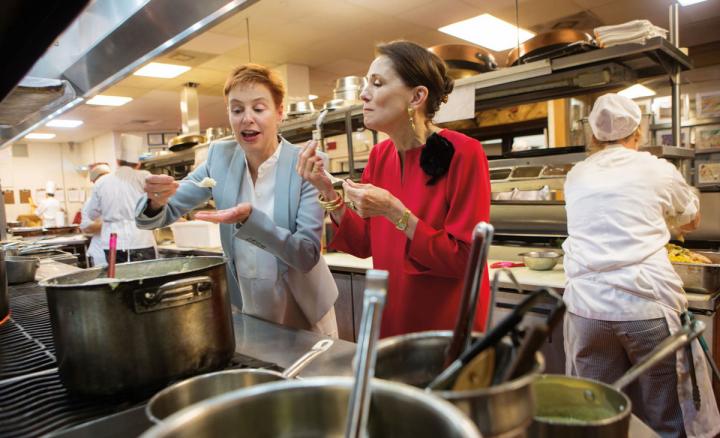 Ti Martin and Brennan have stayed busy throughout this break so far, engaging with customers and employees, and also thinking ahead.

To the earlier dilemma, they’ve spent ample hours considering COVID-19’s ramifications on customer service. How will signing the check work? Wine service? “Every single thing we do, we have to relook at,” Ti Martin says.

They’ve already begun working on ways to address “the spirit of hospitality.” One idea is teaching servers and chefs gestures that say what their words and facial expressions cannot. Things like bowing. Tapping their chest. Blowing a kiss.

Ti Martin says she’s even considered pulling inspiration from the old days when reservations would split by smoking and non-smoking. Could there be a room for social distancers and one for non-social distancers?

“I think all things are possible right now,” says Ti Martin, who’s stopped wearing rings because she's had gloves on so often lately.

Regardless of what Commander’s Palace plans for, however, much of it will come down to regulatory measures. What will officials mandate as dining rooms are allowed to reopen? Texas, for instance, plans to open at 25 percent capacity Friday. Georgia has 39 requirements in place, like a limit of 10 customers per 500 square feet.

As of Sunday, 26,773 people had tested positive for coronavirus in Louisiana, up only 261 from the day before. There are 1,701 patients hospitalized and 265 on ventilators. The death toll to date is 1,670.

Commander’s Palace has experience dealing with existential and remarkable events, and what comes next. Hurricane Katrina closed the restaurant for 13 months and cost it $6.5 million, Ti Martin says.

But Brennan rightfully points out a key and unprecedented difference: “[COVID-19] is happening across the world. And with insurance companies, this is a whole different game,” she says.

With Katrina, some regulations included boiling all the water. Restaurants had to serve food only on plastic.

“It was a strange way to operate a restaurant,” Ti Martin says. “And I think that’s where we’ll be now. We’re looking forward to trying to see what service will be like when we reopen.”

Staying connected throughout has been critical, she adds. Commander’s Palace created “Don’t Stand So Close to Me,” cocktail parties where the company’s wine guru, Dan Davis, guides guests via Zoom through the finer points of pairing wines with cheese. Past features include French and Spanish themes.

“There’s no way in the world we can’t make it more expensive, just based on the fact you’re going to have less customers and less demand in the economy," says Ti Martin.

Customers order online for contactless service. For the French event, Commander’s Palace shipped three bottles of wine along with cheeses and crackers to Orleans Parish residents. The orders arrived Wednesday morning, with a Commander’s Palace staff member calling to follow up. That evening at 6:30 on Zoom, Davis hopped on and engaged with guests. The deal cost $99, plus a $5 delivery free. For an additional $30, people could increase to cheese service for four people.

Commander’s Palace also joined forces with Krewe of Red Beans and Feed the Frontline NOLA to provide meals for front-line workers. It’s asked for donations during video demos launched throughout the crisis, walk-throughs on how to execute some of its famed recipes, everything from Turtle Soup to Pecan Pie. It’s also auctioning an in-home chef dinner party for eight, starting at $15,000.

For employees, Commander’s Palace started a GoFundMe early on but then moved it over to the Greater New Orleans Foundation for tax reasons. Workers can apply and get aid.

Additionally, Martin says, they’ve set up text alerts and email reminders and distributed duties among restaurant leaders to keep communication going. They try to call as many furloughed employees as possible.

Commander’s Palace also donated teddy bears to children of frontline employees who go to “Kid-Cam” camps around the state and Gulf Coast.

Martin says she’s been involved with government leaders concerning comeback efforts, and is “pushing in every direction we can push.”

An issue she sees on day one is the cut-and-dry image of opening with reduced dining-room seating. While straightforward, it just won’t work for everyone.

“If you took away 10 percent of our customers, we would lose our derriere financially,” Martin says. “The little bistro up the street—if you took away half their seats, there’s no way they’d make it.”

This is going to unfold differently for fine dining than other restaurants, she adds. There’s simply no way around it. Ti Martin believes Commander’s Palace could change its operating hours in response. Open earlier. Perhaps keep the kitchens going later.

“There’s no way in the world we can’t make it more expensive,” she adds, “just based on the fact you’re going to have less customers and less demand in the economy.”

The future of fine dining could, to some degree, almost digress back to what it was decades ago—less inclusive, more of a special club feeling. Fewer guests, but higher-priced tickets and exclusivity.

Martin says New Orleans, for all its press as a COVID-19 hotbed, has done what it always does when the stakes raise. Restaurants across the city tightened their ties to each other and have done everything they can to help.

“I know it’s not like that everywhere. In some places—I’ve certainly been many, many places where everybody was so competitive and cutthroat. New Orleans is competitive but friendly. … We are right there for each other.”

Martin says her mother, who passed away in May 2018, would be “blown away,” by what’s happening. “She would expect us to do what we’re doing,” she says. “No. 1, do everything we can for our family, our literal families, and our working families, and our business and our industry. I feel like she’s still right here with us. There’s a picture of her on my desk right now. That’s what it’s always about. You take care of your family and your industry and your city. And that’s what we’re doing.”