3 Potential Speed Bumps for Restaurants on the Road to Recovery

At this stage in the pandemic comeback, there's an urgent need for restaurants to address these specific guest pain points.

The restaurant industry has rounded the pandemic corner in a big way, with food services and drinking places generating sales of $71.3 billion in May. A year ago, it was just $42.3 billion, according to Census data.

A recent survey from SafetyCulture, a platform for workplace safety and quality, showed a significant rise in consumer confidence. Only 23 percent of respondents said they were uncomfortable with the idea of being inside a restaurant or bar over the next three months versus 52 percent this time a year ago. Additionally, among vaccinated respondents, people were more likely to express concern over going to a public event (38 percent), followed by the gym (35 percent). Bars and restaurants were well behind at 25 percent, suggesting foodservice could play a bridge role in helping guests return to old routines.

Yet still, there will be speed bumps. Lisa W. Miller & Associates, which has conducted consumer surveys throughout the pandemic, ran data on the three guest pain points restaurants need to address in the journey’s final leg.

As noted, guests’ readiness to re-engage continues to accelerate. Sixty-three percent of Americans, Miller found, are ready to step out, put a toe in the water, and get back to some semblance of normalcy. “Consumer demand is exploding, yet it has not gone unnoticed by consumers that there are more and more crowds everywhere from restaurants to shopping malls, and even national parks,” Miller said.

Naturally, this is a positive turn for restaurants. And it puts operators in a pressure cooker to respond. Miller said restaurants need to be mindful of potential frustrations among guests—something that could run its course from accepted setbacks of the COVID experience to something that sends people to the competition. 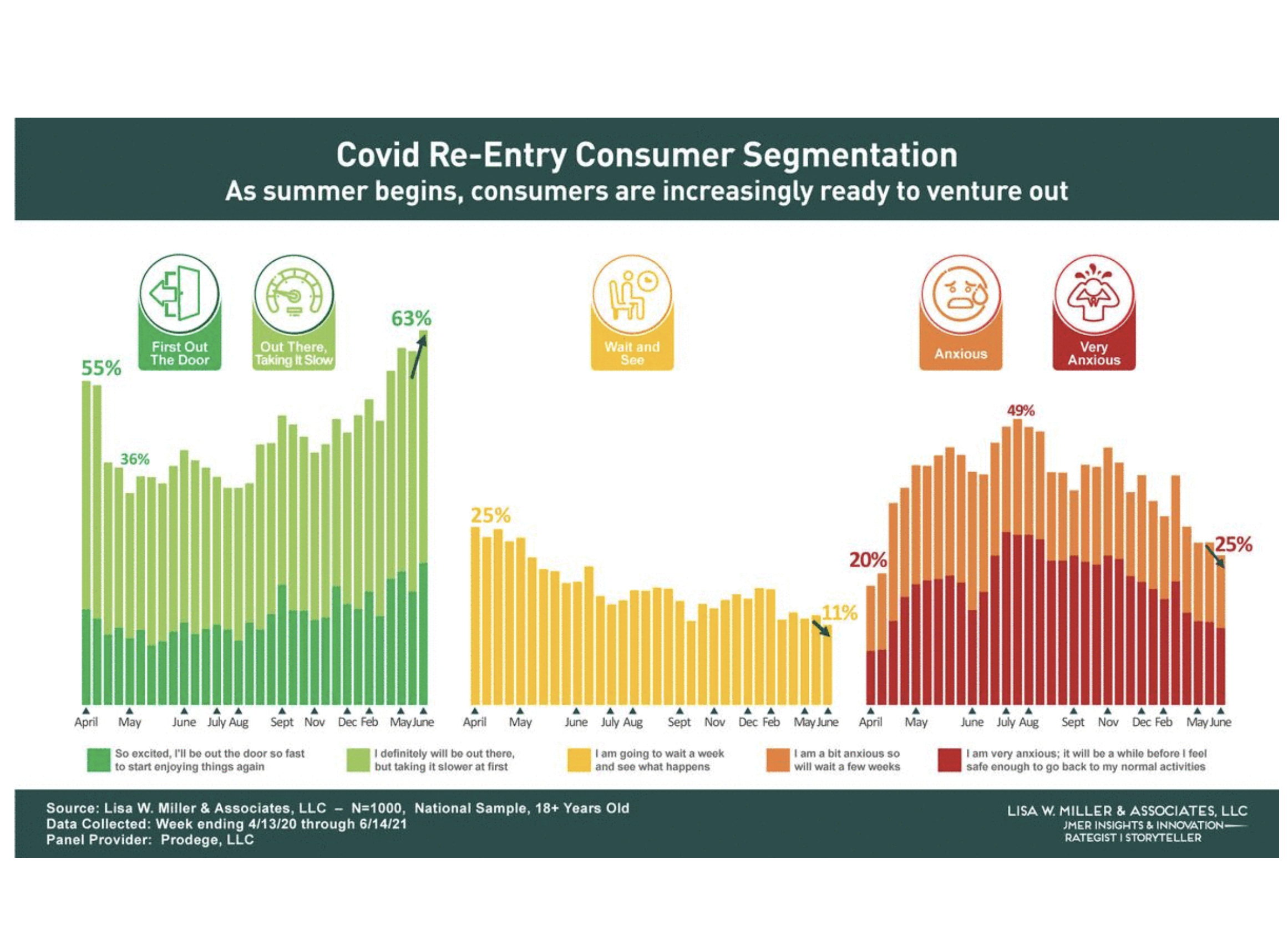 No. 1: Consumers are running out of patience with understaffed restaurants

June data from Miller indicated that 43 percent of restaurant goers are frustrated with brands not having enough staff, up 2X from February. For the “first out the door” segment, understaffed frustration skyrocketed up to 56 percent.

Percentage frustrated with not enough staff when dining in at a restaurant during recent visit:

It’s a straightforward dynamic. Waiting customers tend not to be satisfied customers. And it’s difficult for a restaurant to deliver experience without proper staffing. Not just in numbers, but in quality, too.

According to a recent hiring report from Snagajob, job vacancies are up 68 percent while job seekers remain flat versus pre-virus levels. In other terms, there is, indeed, a hiring shortage.

The platform called this, “the most competitive hourly labor market in a generation.”

While Snagajob believes the workforce will gain greater equilibrium come August or September, challenges will persist throughout the summer.

One thing to consider is the list of states opting out of federal pandemic-era jobless programs continues to grow and hit 25 by the end of May. On May 4, Montana became the first to announce a preemptive end to expanded unemployment. Since, 24 other states expressed intent to do so, including Texas, Florida, Georgia, and Ohio.

Snagajob found that in markets ending these benefits, hourly job search growth (from May 1 to May 15) rose 21 percent. In states keeping them until the September cutoff, it’s up only 13 percent (16 percent overall nationwide).

Essentially, there’s meat to the notion people are electing to stay at home and collect instead of return to work. But the shift, per Snagajob’s data, is the horizon (and end of aforementioned benefits) is beginning to impact people’s decision making. They see the tunnel’s exit and are beginning to plan for what comes after.

The average American received $387 from their state in weekly unemployment payments. If you add the $300 expanded boost, it’s close to $700 ($687, to be exact). So for a 40-hour workweek, the average unemployed American was getting the equivalent of $17.17 an hour. Or, more than two times the federal minimum wage. And thus, hiring challenges were compounded from an already thin-labor pool pre-COVID.

In Snagajob’s survey, employers said they were doing the following to attract hourly workers:

And these were the reasons people gave for not seeking out hourly employment:

The two polls offer an incentive roadmap for how to satisfy an hourly worker that has more choices than ever. Restaurants are competing with each other, different sectors (where hospitality employees might have fled during COVID), remote work, and yes, unemployment.

A Black Box Intelligence webinar in April showed that 49 percent of restaurants had luck attracting hourly workers through employee referrals. According to Snagajob, referrals result in 5X the hire rate of other applicants. No surprise then to see operators raise referral bonuses, run monthly campaigns, and ensure signage in-store, like breakrooms and the kitchen.

Mac’s Hospitality Group, for one, is offering any employee who refers a kitchen candidate a $250 bonus if hired. Plus, a $1,000 bonus for new kitchen hires who stay until September 1.

Is it time to unmask? The topic remains divisive. Forty-nine percent of restaurant guests in Miller’s study expressed frustrations with consumers not wearing masks—up a full 10 points from May. To a degree, this is expected considering fewer people are wearing masks following the CDC’s May 13 announcement that vaccinated individuals could gather, indoors or outdoors.

The news represented a critical turning point for perception. For the first time since Datassential began tracking consumer sentiment over a year ago, there were suddenly more people concerned about the economic crisis caused by coronavirus than the public-health crisis (51 versus 49 percent).

In Miller’s data, the “very anxious” consumer segment appears to finally be headed back to restaurants. Their radar is up, though.

Nearly half said they were concerned with fellow patrons not wearing masks or social distancing, as well as restaurants not taking enough visible precautions to keep them safe.

While the total percentage of guests concerned about safety protocols seems small at 15 percent, the majority of these diners find it “extremely” or “very” frustrating—numbers that will negatively impact their decision to return, Miller said. 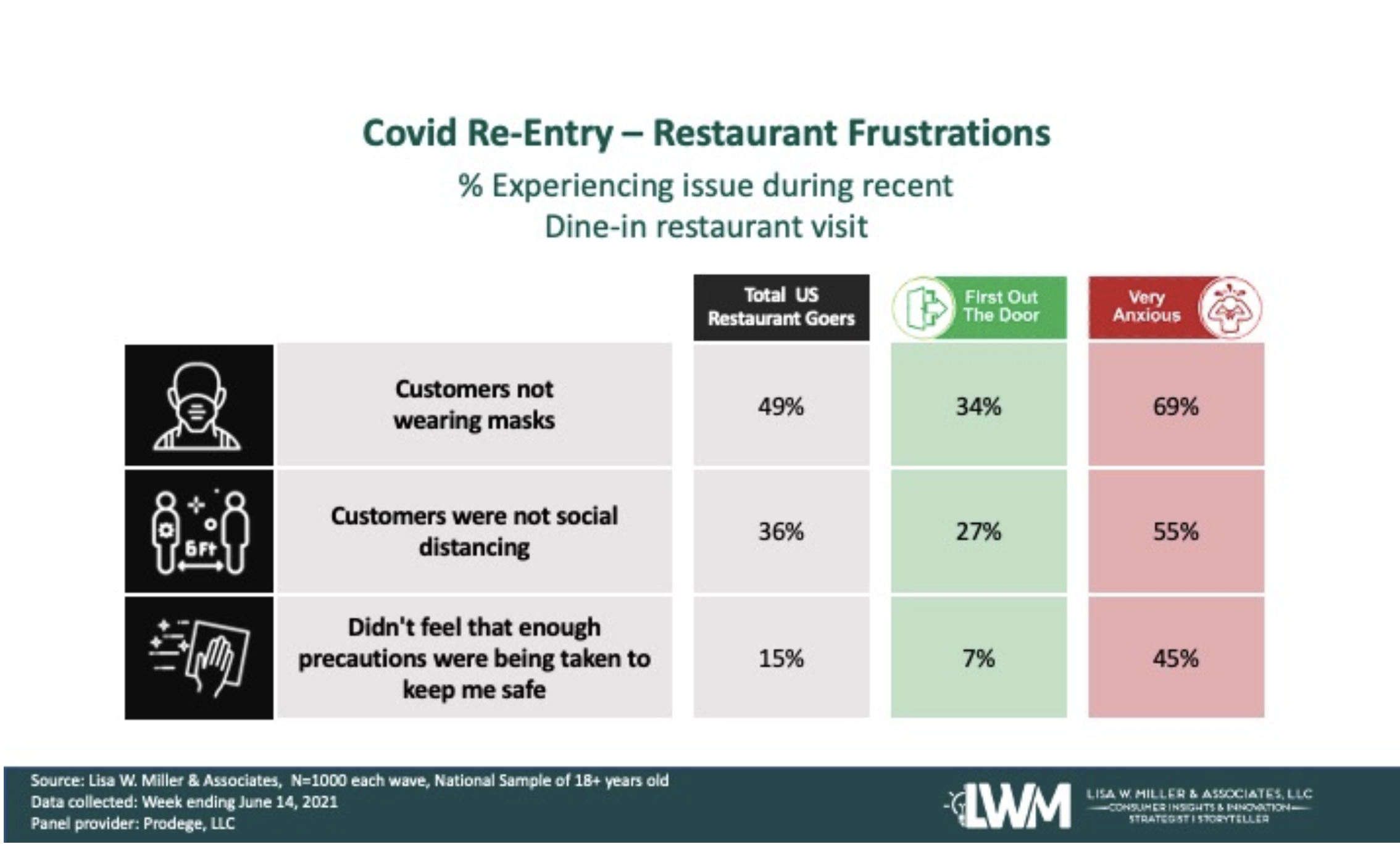 According to Black Box, over the last three months, the number of mentions of masks has declined in online reviews and comments for full-service restaurant brands. During the same period, the net sentiment associated with masks in those reviews improved. For limited service, the frequency of mentions that refer to masks has not declined significantly, yet net sentiment associated with mask usage continues to be negative.

“Analyzing those mask mentions revealed that there are now two strong positions in conflict,” Black Box said. “There are many people that are still expecting masks to be worn, and that are also pointing out when they are not being worn correctly. This is nothing new, but rather something that had been a very common stance throughout the pandemic.”

“But now, there are also many people that are being vocal about the new guidelines no longer requiring them to wear masks because they have been fully vaccinated,” the company added. “And in many cases, they are frustrated that they are being asked by restaurant employees to wear masks. Also, they also point out that some of those reminders to wear masks by the restaurant staff are being perceived as being quite rude and unfriendly.”

Returning to SafetyCulture’s research, more than one in three people (36 percent) said they will have some level of discomfort visiting businesses that relaxed COVID safety precautions in the coming months.

What they want to see from businesses:

Datassential asked this of guests as well:

If dining rooms reopen, what could restaurants do to make you feel safer dining in?”

Percentage of consumers indicating each option is a “requirement.”

Providing disinfectant wipes for me to use

No open containers of food

No. 3: Inflation, prices on the rise

From commodity concerns to higher wages intended to combat the labor shortage, restaurants are taking price across the spectrum. Chipotle announced in June it was lifting menu prices 3.5–4 percent to cover its decision to boost average wages to $15 per hour by the end of the month (the upgraded pay scale calls for hourly employees to earn starting wages ranging from $11 to $18).

Sixty-six percent of people in Miller’s study said they are concerned restaurant prices are going to hike “a lot.”

“Be cautious with pricing actions as price sensitivity will be high in the coming months,” Miller said.

Again, this flashed in Datassential’s survey, too.

“What level of menu price increase would you happily accept and regularly pay, if it ensured that a restaurant could retain the optimal number of employees?

Datassential suggested operators consider automation, if possible, as half of consumers said they’d accept ordering kiosks and other technology. Nearly as many felt the same about “slight” price increases to help restaurants get to full strength.

When asked if guests are seeing signs of inflation and rising prices in general in the economy, 82 percent of Datassential’s respondents said they did.

And this could signal trouble for restaurants, with 35 percent of consumers saying they’d cut back on restaurant meals if inflation accelerated.

Hurdles or not, optimism is the word of the hour for restaurants as the sector barrels toward the summer. Only it’s vital today to also understand there’s a need for operators to address specific guest pain points or risk squelching the recovery momentum, Miller said.

“Hard choices will need to be made,” she added. “We can’t sacrifice today’s guest experience to make up for last year’s lost sales.”

Miller said operators should continue to “lead with joy.” Schedule appropriate staffing levels to deliver an exceptional and memorable experience. While this is easier said than done, of course, it should still climb to the top of the priority list. COVID can’t be an excuse when the field is back open again.

“The strongest brands that successfully solve for these guest pain points will separate themselves and not only survive but thrive post pandemic,” Miller said.