At Sobre Mesa, Saltspring mussels are served atop toast with chipotle escabeche and avocado mousse.

The rising chef's new concept shows off his considerable talents.

Nelson German may be on the rise as one of the hottest chefs in the Bay Area and a “Top Chef” contestant, but his culinary career began with a much humbler origin story.

Late one night, back when German was only 18, he and his friends stumbled out of New York’s storied Copacabana nightclub and decided they should one day open their own nightclub. In doling out responsibilities for the hypothetical business, it was unanimously decided that German would be the chef. The idea was, at best, a lark, but for German, it became much more. 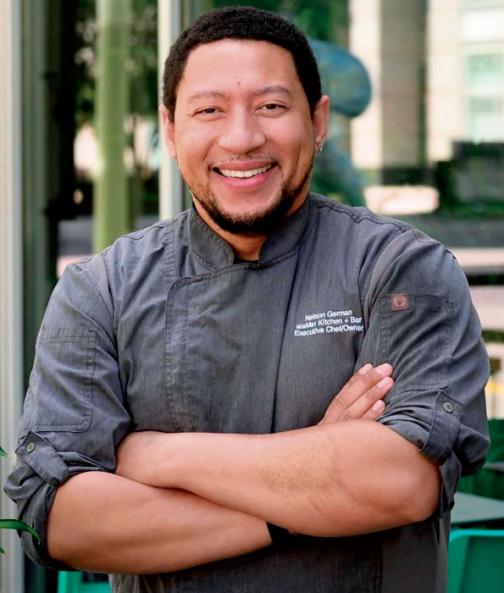 The restaurant industry in one word: Beautiful

The most underrated dish: Stews

Hope for 2021: People in this industry getting more respect, especially servers. People love restaurants, but sometimes they don’t respect the people.

“I took it very seriously. I took it as a challenge as, ‘OK, I can do this,’ because I always had a curiosity for it. I would cook sometimes for my friends or experiment at home,” he says.

Growing up, German hadn’t considered becoming a chef as a viable career path. For one, it was before the dawn of the foodie era, back when chefs were primarily behind the scenes, and outsiders had few glimpses into the daily workings of their profession. And as a Dominican American, German says there was a pervasive cultural mentality in which men did not belong in the kitchen.

But once the idea took root, German couldn’t help but pursue it. He attended the Art Institute of New York City to learn the basics but maintains that on-the-job training was the most beneficial to his professional growth. Moving up from prep cook to executive chef, German worked at NYC institutions like Citarella and Joseph’s Restaurant. At Gramercy Park Hotel, he studied under one of Japan’s original Iron Chefs, Yūji Wakiya. German credits Wakiya’s mentorship for bringing a fresh element to his French- and Mediterranean-centric formal training.

This global approach to cooking was further broadened when German moved to Oakland, California, and began traveling more extensively.

“I learned so much from New York, but I needed a change, and I think what piqued that was the fact that my wife introduced me to traveling,” he says. “It broadened my eyes to things; it broadened my eyes to food, to these different kinds of global cuisines and learning these stories and cultures through that food. Food is a universal language.”

When the Great Recession hit New York City restaurants especially hard, German and his wife decided to move back to her hometown. Oakland offered the chef a slower pace of life—“it tripped me up the first time I had to take a break out here; you’re actually forced to take a 30-minute break,” he says—and also marked the start of a new chapter in his culinary journey.

Noticing a shortage of seafood concepts in the city, German decided to build a restaurant that would fill that niche, and in May 2014, alaMar made its grand debut. Even though the seafood focus was born out of business savvy, it was still a passion project. Spanish cuisine played a strong role, but so too did Latin American and Asian flavors.

“There are a lot of original dishes, dishes I’ve done in the past at other restaurants with my own twist, … and also a lot of dishes from my childhood,” German says. “I really needed to tell a story that set me apart from other seafood restaurants and all the other restaurants in general. No one knows Latin-Caribbean cuisine as much here compared to the East Coast, so I wanted that realm but with all these little influences.”

A few years ago, German’s curiosity began to wander into new territory. One day, while in between bartenders at alaMar, he worked as the de facto mixologist and found the process both gratifying and intriguing.

“It felt like I was cooking, but with liquids and in a new setting. And what’s cool for me as a business owner is to actually be in front of the guest and to get to have conversations while creating these amazing products,” he says. “I’ve been cooking for so long, and this was something that’s really cool and interesting. And I finally realized that [crafting] cocktails is an art form, just like making food.”

German began exploring the possibility of opening a cocktail bar, where drinks would be the headliner and food the supporting cast. “Chefs open restaurants all the time; let me open a cocktail bar and really change the game,” he says.

He dove into research mode by traveling and visiting hip bars for inspiration. He even staged at local places in Oakland to learn from veteran mixologists. The fruits of this labor, Sobre Mesa, is an Afro-Latino cocktail lounge that taps into the chef’s Dominican heritage while also showcasing the culinary legacy of the African diaspora across Latin America and the Caribbean.

“What I’m considered to be doing now is Pan-African. I think it’s still in the global realm because it’s grabbing from the African Diaspora, but it’s telling a different story,” German says. “A lot of us as chefs don’t like to use that word [fusion], but it really is. Africa influenced the world. Because of the slave trade, the foods and ingredients there were brought all over the place, … there are all these ties.”

Sobre Mesa had the bad fortune of opening in March 2020, and after less than 10 days in operation, COVID-19 necessitated a temporary closure. While alaMar had the existing consumer base to build an off-premises program, its sister concept had no such luxury. Nevertheless, German figured out ways to cross-utilize the two, adding drinks from Sobre Mesa’s menu to the takeout selection at alaMar. And in November, the fledgling cocktail bar was able to reopen at quarter capacity indoors (at press time, it was up to half capacity) while also offering al fresco dining in a decked-out, tropical-themed parklet.

As difficult as the pandemic has been, German found a bright spot in the Oakland community, which rallied to support restaurants like his. The chef did his part to give back, too. During the pandemic, alaMar donated tens of thousands of meals through organizations like José Andrés’s World Central Kitchen and Edward Lee’s Lee Initiative. With the latter program, German’s kitchen was producing 300–400 meals each day—a large-scale production that would be impossible under normal circumstances. This work not only helped the restaurant keep its workers employed, but also served those most in need.

“Because of the work that we’re doing, the community came out really strong for us and kept us alive. They supported us. Even people we’d given free meals to were coming back on another day to pay for a meal,” he says. “That’s special.”

This community-first approach to business may have prompted another positive development, namely German’s spot on the 18th season of “Top Chef.” In a previous interview with the San Francisco Bay Times, he posited that it was perhaps his local work beyond owning and operating two restaurants that led the show’s producers to select him as one of the latest competitors.

It’s a somewhat surreal time for German, who despite being in the business for 23 years, has operated somewhat under the radar until recently. Now, people come into his restaurants to take pictures and tell him that they’re rooting for him. The experience has also led to some reflection on how far he has come: from a nightclub pipedream to two thriving restaurants and a television debut.

“It’s an amazing feeling to be finally recognized in some capacity. I’ve been in the business for so long; I’ve been through a lot of ups and downs. It’s hard for a person of color to go up in this business, but I made it,” German says. “From that first moment with my friends until now, it’s so surreal. And even my friends watching me on ‘Top Chef’ are like, ‘You actually pulled through. You went with your promise ever since that moment, and we’re so proud of you.’”