It took a couple of days for the off-premises orders to pick up at Cafe Rule.

Independent restaurants in small markets are facing the same challenges as their big-city counterparts.

It’s been a little over a week since Cafe Rule closed its doors in Hickory, North Carolina, a sleepy community of 40,000 that rests near the base of the Appalachians. In that time, the upscale yet warm and welcoming restaurant has debuted a new curbside pick-up service while also promoting delivery through third-party partner, DoorDash. It’s even offering a 20 percent discount on all orders as an added incentive.

“It’s beneficial to us. We offer such a variety of options in our menu and so many local favorites. A lot of our diners are coming to us for staples, like Chef Dave’s Southern Fried Chicken, quality steaks, and so many signature dishes that people are latching onto,” says Paul Nance, the restaurant’s director of hospitality operations. “There are only so many things you can buy at the grocery store, and there are only so many things that you can find outside of fast food if you want to have a nice meal.”

Although Hickory is just an hour and a half from Asheville, it hardly has the reputation of the mid-sized mountain city that’s been making top foodie destination lists for the better part of the decade. (In truth, Hickory is best known for its handcrafted furniture.) But in the midst of the coronavirus crisis, Cafe Rule and other small-town independents are facing the same challenges as their big-city brethren.

What the town may lack in quantity, it makes up for in quality—and locals know it.

“So many of our patrons have stayed loyal to us and continue to use us as their primary restaurant for takeout. With Hickory not being a large town, there aren’t a ton of restaurants that do the type of food we do,” Nance says. That loyalty may be a saving grace for Cafe Rule and other independents—especially when the statistics are not in their favor. According to Datassential, only 35 percent of restaurant traffic is being captured by full-service restaurants (the rest going to limited service). Furthermore, 75 percent of consumers are going to chains, leaving only a quarter slice of business to independent operators.

It took a couple of days for the off-premises orders to pick up, which Nance attributes to a delay in both understanding the new dine-in ban and learning that restaurants like Cafe Rule would continue service in some capacity. “I think people were trying to figure out what exactly was going on with the limitations, what they could and couldn't do in terms of dining,” Nance says. “Over the weekend, we saw [business] start to build more, and it's certainly taken off.” 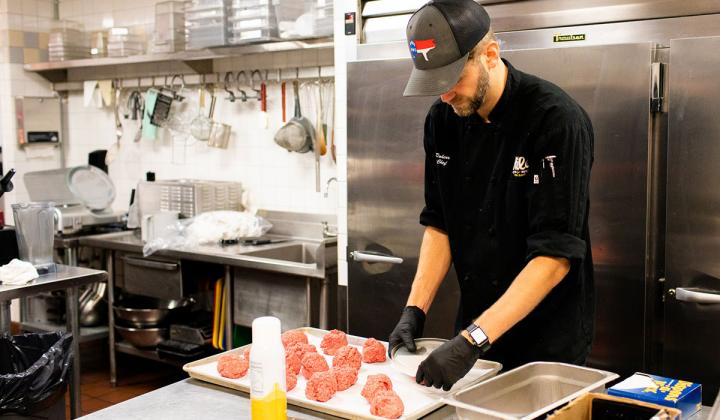 Cafe Rule in its current incarnation has been open since 2016.

The usual menu at Cafe Rule might be best described as New American with comfort foods that are reimagined through a chef’s eye (see again: the fried chicken, which is available regular or Nashville hot and served with brown butter corn and herb-mashed potatoes). At the same time, Cafe Rule’s selection of dishes also includes those that have long been mainstays in bigger cities but may be less familiar in small-town environments, like the Sweet & Spicy Thai Chili Calamari and the Roasted Acorn Squash with grilled parma prosciutto, fried sage, goat cheese, and local honey.

To adapt for curbside and delivery, the restaurant pared down its offerings a bit, but the menu still comprises nearly three dozen options, ranging from appetizers and salads to handhelds and hearty entrées. Cafe Rule also introduced a family-style Sunday menu with larger platters, pizza, and a la carte options available for pickup or delivery between noon and 4 p.m.

“Even though people can't get together now at church, they still want to have that family experience on Sunday night. We wanted to put together family-style meals that people could take home to a family of six and enjoy a Sunday dinner together,” Nance says.

Cafe Rule in its current incarnation (previously it was Youssef 242 and before that, Café 242), has been open since 2016 and in that time it has always offered to-go options. Last year it began working with DoorDash to capture business in the ever-growing delivery sector. Nance estimates that prior to last week, off-premises business accounted for just over 10 percent of total earnings. Like many full-service restaurants, Cafe Rule hangs its hat on that elevated, in-person dining experience—something that is an asset under normal conditions but a debility amid coronavirus-induced shutdowns.

To bridge the experience gap even a little bit, the restaurant staff has begun including hand-written notes with each order in which managers thank patrons for their business and staff sign their names.

“It's that personal touch that we find has been kind of our trademark over the years that we really pride ourselves on,” Nance says.

The off-premises-only strategy has only been in place a little over a week, but already certain dishes have emerged as favorites. In addition to the fried chicken, the Pimento Cheese Bacon Burger, the Parma Ham and Fig Jam Wood-Fired Grain Pizza, and the Fried Broccoli Baffle (an appetizer topped with cashew aioli and lemon salt) have been all-stars.

The elevated nature of Cafe Rule’s cuisine means that there is some concern around preserving the food quality in transit. The restaurant has had some practice with that, especially over the past year when it began delivery service.

“There's always a concern that you know your food is not going to taste as good,” Nance says. “We're doing everything we can to package the food up in a way that's going to remain fresh and hot so that when they get home, they can enjoy the same way they would in the restaurant.”

Upscale bistro fare isn’t the only item loyal customers are picking up or having delivered. Like other restaurants, Cafe Rule is pushing its robust wine program; at any given time, it has 5,000 bottles on hand. For members of its Wine Rules Wine Club, it’s 25 percent off those orders rather than the standard 20.

In light of both the discount and an uncertain future, bottles are flying off the shelves. “We’ve had some people who are stocking up right now,” Nance says. “I think that's something that sets us apart from a lot of other places: We’re continuing that food and wine experience, even though it's not in the restaurant itself.”