Han Oak might serve a prix fixe menu of Korean barbecue or a mix of noodles, dumplings, and rice cakes (above).

To call Han Oak a restaurant would be selling it short. The Portland, Oregon, establishment is more of a shape shifter—part reservation-only supper club, part noodle-and-dumpling house and brunch destination, plus a venue for pop-ups and special events. The James Beard Foundation semifinalist adapts to the occasion with preternatural ease. 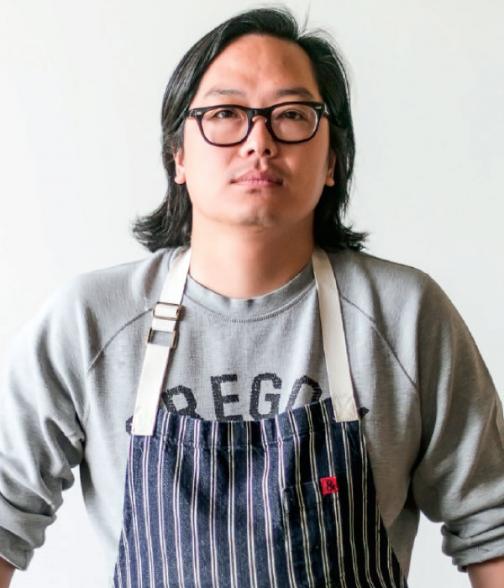 Chef Peter Cho worked under April Bloomfield for a decade before returning to his home state to open Han Oak. He credits the open-minded community in Portland for the restaurant’s warm reception.

“I prefer that than trying to grind it out being open seven days a week. I think that’s more difficult,” he says. “The dining public here in Portland is way more savvy. They’re accepting of a whole new thing or a different concept, different formats.”

Still, Chef Cho concedes that Han Oak’s first year has been a whirlwind. He spent about a decade in New York City under celebrated chef April Bloomfield of The Spotted Pig and The Breslin. The pull of family—Cho’s parents and brother are here and he and his wife wanted to start a family—brought the Oregon native back to Portland a couple of years ago. The move also offered him an opportunity to try his hand at an unconventional restaurant model. For years, he’d watched from afar as chefs in smaller cities created concepts with a DIY mentality. Such experimental approaches were cost-prohibitive in New York City, he says.

Han Oak also marked a new culinary chapter for Cho. Although Cho is of Korean descent, he had never prepared the cuisine in a restaurant setting.

“Korean food is new for me to cook professionally. I had never really worked at a Korean restaurant, and a lot of Korean restaurants are family-run and very homey. You don’t see a lot of elevated Korean food, not in Portland anyway,” he says, adding that he’s trying to keep the fare traditional. “I’m really referring to my mom’s cooking as much as I can and using techniques I’ve learned over the years.”

Named after hanok, or traditional Korean house, Han Oak camouflages in its environment. Guests enter through an unmarked orange door in the back, off a small parking lot. The narrow space could be a studio apartment, but instead is outfitted with a petite kitchen and bar. Four wooden benches and a few bar chairs are the only indoor seating, but a glass garage door at the back expands into an idyllic courtyard, more than doubling the space.

Since its inception, Han Oak’s service has also more than doubled. Originally the supper club–style restaurant served a prix fixe Korean barbecue dinner Saturday and Sunday nights, by reservation only. That foundation has remained, but now it also offers Korean brunch on Sundays and à la carte dumpling-and-noodle nights on Sunday and Monday.

“I love dumplings in any form, any flavor. That’s why we added the dumpling-and-noodle night because those ended up being my favorite things to play around with,” Cho says, adding that the pork and chive dumpling is a personal favorite (it was also honored as one of Portland’s most iconic dishes by online publication Eater). As for the noodles, they are hand-pulled in-house, ranging from a traditional kalgooksu bokum—wheat noodles with gochujang dressing, chicken, scallions, and nori—to a decidedly Americanized budae jjigae—ramen noodles in a pork-and-kimchi broth that are dressed up with Spam, hot dog, tofu, and American and mozzarella cheeses.

The prix fixe comprises a choice of bachan (side dishes), noodles, and hearty ssam plates (entrées) with proteins like smoked hanger steak and slow-roasted pork belly. Diners can also add à la carte items and a cocktail to their meal.

The limited operating hours open the restaurant to hosting special events; Chef Cho says the occasions can range from a small dinner party to a Nike company event. Chef friends also hold pop-up nights at the restaurant—something that’s near and dear to Cho’s heart.

“When I first moved here, another chef buddy of mine and I started a little pop-up, and while we were doing that, chef friends were very supportive. They hosted us in their places when they were closed. And so when I opened, I wanted to pay that forward,” he says. In that time, Han Oak has welcomed Ryan Roadhouse of Japanese concept Nodoguro, Sam Smith of Middle Eastern–themed Tusk, and Doug Adams of soon-to-open fried chicken and barbecue joint Bullard, among others.

The inventive menu and the difficulty in scoring a seat could paint Han Oak as an exclusive hideaway for a select few. To be fair, the atmosphere is intimate, given the close quarters, but it is also laidback and inviting—a legacy of its supper club roots. With the help of the landlord and real estate developer, they were able to build Han Oak within the small space, which was originally intended as home-office studios. Cho credits his wife and co-owner, Sun Young Park, with the open layout and overall design.

Although Han Oak did not win the James Beard Foundation award for best new restaurant, the restaurant is continuing to rack up accolades, especially within the local community. Eater Portland named it the 2016 restaurant of the year, and Cho was one of five chefs on lifestyle website Thrillist’s best Portland chefs of 2016. The chef says the difference between places like Portland and larger cities is the tight-knit community where he never feels out of touch.

“Chefs come to Portland and find inspiration through the amazing farmers markets and the tight-knit restaurant community,” he says. “It’s a small industry, and we all know each other. Chefs and restaurant people in general just like to support what’s happening and what’s new.”