Like snowflakes, n/naka’s dishes are one of a kind and stunning in their intricacies.

In the 2015 episode of “Chef’s Table” that features n/naka, the first image on the screen is a whiteboard in the belly of the kitchen. On it, in neat script, reads a list of commandments, the first being, “Every day better in every way.” For a restaurant that prides itself on never serving a dish twice to the same customer, it’s a tall order. But then again, chefs Niki Nakayama and Carole Iida-Nakayama possess a fortitude that is impressive even in the take-no-prisoners restaurant world.

But it would be a mistake to characterize the two’s work ethic as purely nose to the grindstone. No doubt, they are two of the hardest working chefs in the industry, but they also recognize that inspiration must come from outside the confines of the kitchen. And equally important, as both co-owners of the restaurant and partners in life, they are keenly aware of how each can spark an idea in the other.

“Carole’s amazing with details and technical things,” Nakayama says in “Chef’s Table.” “I am the opposite. I throw things around and can be kind of a mess.” But it is this dichotomy that has made n/naka so singular in its cuisine and ethos. 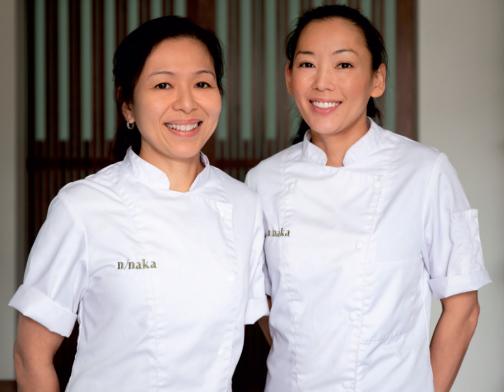 Best source for inspiration: There isn’t a single source; inspiration is everywhere as long as you’re open to it.

Restaurant industry in a word: Entertainment.

Favorite way to de-stress: Be in nature

That partnership has been put to the test in recent years as the popularity of their Los Angeles restaurant has soared since the premiere of the Netflix episode. “Now that it’s more high profile, it feels like the expectations are much higher, and it demands more from us and our team,” Nakayama says.

As tempting as it may be to capitalize on their newfound fame by rolling back an ingredients-first philosophy, the chefs are committed to preserving the restaurant’s integrity. Iida-Nakayama says they are learning to rise to the occasion to not only meet guest expectations but to also grow sustainably and support the n/naka team.

One major rule they implemented post-“Chef’s Table” success may seem counterintuitive, but it ultimately kept them from flying too close to the sun. “We didn’t make more tables available until we felt we were ready and felt more confident,” Nakayama says. “Solid and slow growth is better than moving too quickly while still on shaky ground.”

Even now, the restaurant is only open for dinner and only Wednesday through Saturday. Reservations for the three-hour, 13-course menu open up exactly three months in advance, and n/naka acolytes know to have their finger ready on the cursor at exactly 9:59 a.m. every Sunday.

Those lucky enough to gain access to the incomparable meal are treated to what Nakayama calls a modern kaiseki—a multi-course meal that takes the utmost care in culinary technique and hospitality. While their utmost reverence for ingredients remains, like in a traditional kaiseki, the chefs here use richer food and preparations. To wit, one of the restaurant’s signature dishes is a pasta course dubbed shiizakana, which translates to “not bound by tradition” or “chef’s choice” in Japanese. Previous iterations have married East and West, such as spaghetti-like noodles with abalone shellfish. While such a dish would never appear in a classic kaiseki meal, as Nakayama says in the episode, “I wanted to do something that was very me.”

Although there is no mistaking the restaurant’s cuisine for anything other than Japanese, the chefs’ creativity and willingness to push culinary boundaries sets n/naka in an echelon all its own.

“We often say n/naka is a restaurant that could only exist in California, because Niki and I were born and raised here in Los Angeles, and that influence—via the seasonal ingredients—is very much reflected in our cuisine,” Iida-Nakayama says. “Some Japanese restaurants try to re-create the exact experience of a restaurant in Japan, whereas we are trying to integrate and honor our surroundings, which is a pillar of kaiseki cuisine.”

Iida-Nakayama’s current favorite dish on the menu reflects this locavore philosophy. It’s a kombu-cured sea trout served with finger limes that are grown on the couple’s tree at home, plus grapefruit mint from Girl & Dug Farm farther south in San Marcos. “Tying the elements together to make it uniquely n/naka is at the core of what we do,” she says.

The chefs, with their common upbringing but different learning styles, seem to complement each other perfectly. When asked if it’s ever difficult to work alongside each other, there is one point of contention. “The con of working as a team sometimes comes down to our inability to stop talking about work because it’s so much a part of our lives,” Nakayama says.

“Sometimes, even if one of us has stepped away mentally, the other one might still have work-related thoughts on her mind,” Iida-Nakayama adds.

But this seems to be a mere hiccup in comparison to the joys of collaborating with each other. Nakayama says there will never be anyone as dedicated, caring, and committed as her partner. And for Iida-Nakayama, it’s the inchoate connection between the two that makes all the long hours worth it.

“This work can be very time-consuming—actually, all-consuming and stressful,” she says. “[But] when you work with your partner, there is an understanding of what the other is going through. You already know what the problems are, and you know you’re there for each other since you both understand the difficulties. You get to enjoy the highs together.”