The chef is betting on local enthusiasm—not tourism—to grow his restaurant empire.

As a Louisiana native, Michael Gulotta might be expected to stick to classic Southern and Cajun dishes like alligator étoufféee and jambalaya. But the chef has carved out a more nuanced reputation for himself, first through MoPho, a Vietnamese concept with Creole influences that opened in 2014, and then three years later with Maypop, which added New Orleans flair to Southeast Asian fare.

Gulotta’s newest project continues his crossover-cuisine streak and brings a past pop-up to a permanent brick-and-mortar space. The restaurant in question, Tana, will put Italian cuisine front and center, with dashes of Creole flavors and ingredients interspersed throughout the menu. The restaurant is slated to open next year in the New Orleans suburb of Metairie—a mere four miles down the road from MoPho in Mid-City.

Tana is named after Gulotta’s great-grandmother who, while born in Louisiana, moved back to her parents’ native Sicily when she was a child. When later in life she returned to the States, she blended Italian recipes with Cajun traditions. This approach not only sparked Gulotta’s love of cooking, it was also the inspiration for some of the dishes at his new concept. 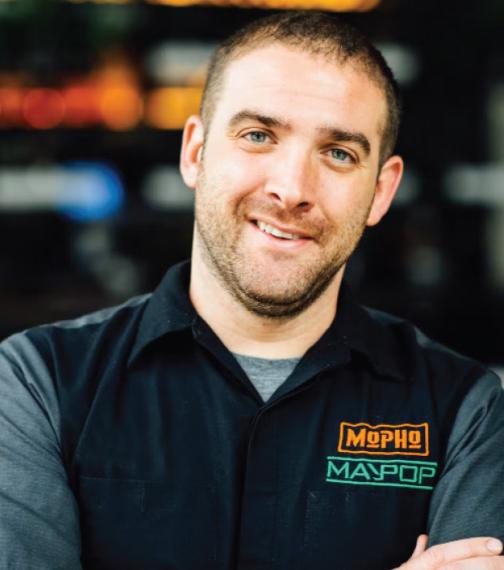 “Her dishes were amazing,” Gulotta says. “She evolved her cuisine to use whatever she could find in New Orleans. If she couldn’t find the traditional Sicilian ingredients, she would substitute something local, and that’s the part I love about her cooking. At Tana, I want to show New Orleans is this ever-evolving melting pot.”

Indeed, melding geographically disparate cuisines has become something of a trademark for Gulotta and earned his previous two restaurants praise aplenty. In addition to being a four-time James Beard Award semifinalist, Gulotta was named Best New Chef by Food & Wine and Chef of the Year by New Orleans Magazine in 2016. Both MoPho and Maypop have landed on “best of” lists from publications like The Times-Picayune, Condé Nast Traveler, Bon Appetit, and Eater.

Although Gulotta was once loath to use the term “fusion,” he’s come to appreciate its range. Some chefs take a bold, over-the-top approach to blending cuisines, but others, like Gulotta, prefer a subtler touch. “You can either smash things that don’t belong together, or you can use these natural pathways that sort of lead to each other,” he says.

And if the pop-up version of Tana was any indication, locals have an appetite for Louisiana flavors accenting other global cuisines. Gulotta recalls one dish, a traditional spaghetti vongole, that didn’t sell—until he decided to crumble some Andouille on top. Then, the dish became a No. 1 seller.

“You can take something super traditional that you’ll find over in Italy and add one little New Orleans ingredient, and it becomes a major hit,” he says. “Ingredients like New Orleans sausage were so much a part of growing up.”

While the sausage-topped spaghetti vongole has a reserved spot on the menu, the rest is still in development. Beyond pop-up favorites, Gulotta plans to put a Sicilian spin on rich New Orleans staples with a focus on fresh, coastal ingredients.

As for the bar program, Big Easy classics like sazeracs will share space with lesser-known drinks featuring Italian spirits, like aperol spritzes and amaro-based cocktails. “I’d love it if we could introduce people to something new, and I think we can pull that off.”

Tana’s sprawling 5,000-square-foot space includes a 16-seat bar and a cocktail lounge that will stay open after dinner service has completed. It’s one of many operational decisions Gulotta is making with New Orleanians in mind. He describes the future space as an “anchor restaurant,” one where he and his team can break out all of the bells and whistles.

“There’s not much in that area except for these big, old, beautiful homes,” he says. “They’ve never really had something like Tana, not to this extent at least. We want to build a spot where people go even if they aren’t there to eat dinner. This is for the locals.”

MoPho has a strong local following, which Gulotta is counting on to help get the word out. He says operating in Jefferson Parish gives Tana a chance of succeeding regardless of how well New Orleans tourism is doing. It’s a consideration the pandemic made all too clear, but one that’s also relevant in a post-Covid world. As Gulotta points out, running a restaurant in downtown New Orleans ties it, for better or for worse, to the ebb and flow of seasonal visitors.

That’s why the chef prefers an all-year-round operation that caters to locals. After all, they’ll have an active part in shaping Tana.

“I’ve wanted to do this restaurant for a really long time, and I’m hoping it’s going to be a huge part of this community,” Gulotta says. “It doesn’t really matter what image I have for it in my head because restaurants take on a life of their own when they open. I’m excited to see where this is going to end up because it all depends on the customer.”