Whether on the stage or in the kitchen, chef Cheetie Kumar always takes the creative route.

It’s no understatement to say that Cheetie Kumar wears many hats. Along with being a restaurant owner and chef, she is also a self-taught musician, former band manager, and advocate for her peers in the restaurant industry.

Kumar’s journey to the kitchen wasn’t dotted with the usual stops at culinary school or prestigious restaurants. Instead, she carved a fresh path and has since found success running her own kitchen—and business—at Garland, an elevated yet bohemian restaurant in downtown Raleigh, North Carolina. Mingling flavors and ingredients from India and the American South, Garland has landed Kumar on the shorthand list for a James Beard Award multiple times. At press time, she was once again in the running for Best Chef: Southeast.

So, how did Kumar move from band manager and rock musician to restaurateur and chef?

“I’m not really sure,” she says with a laugh. “Sometimes I ask myself, ‘How did this happen?’” 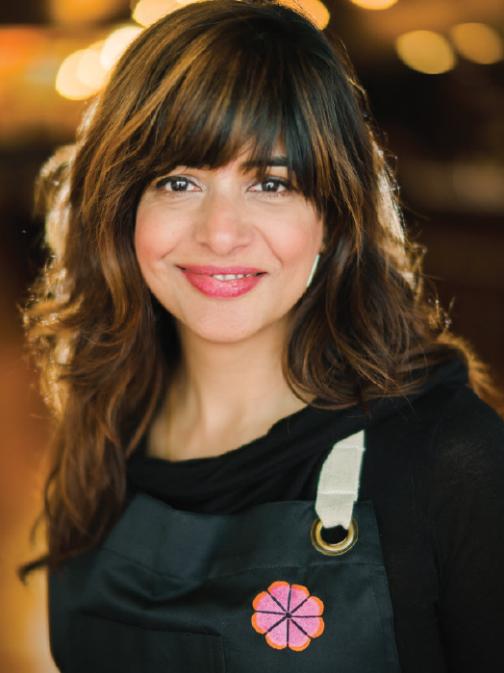 Chef you’d most like to work with: Cookbook authors Deborah Madison and Madhur Jaffrey

Spice of the moment: Coriander

Favorite vegetable: Whatever is at the peak of its season

Kumar spent the first eight years of her life in Chandigarh, a small town outside of Punjab in India. Memories of the local markets in her hometown would stay with her for years and eventually serve as a source of creative inspiration. When the family first immigrated to New York City, Kumar found comfort in her mother’s cooking, which, she says, could turn the most basic ingredients into something special.

Still, the restaurant world wasn’t on her radar as a career prospect. Instead, her family encouraged her to continue her education and attend college. “My parents wanted me to be in academia, like most Indian parents who are immigrants do,” she says.

At the University of Massachusetts, Kumar studied psychology but found a second home at the campus radio station.

“Psychology was really a compromise for my parents. Music was always the thing that inspired me,” she says. “I spent much more time at the station than I did my classes.”

That passion launched Kumar into a music career. Rather than return to New York to work at a big record company, she moved to Raleigh to work as a band manager. The quieter indie music scene was much more appealing to her than the crowded cities up north.

After her tenure as a band manager fizzled out, she took to the spotlight herself, playing guitar in a touring band. For some years, she split her time between playing shows, making records, and traveling the American South. But playing in an indie band wasn’t a particularly lucrative profession, and Kumar needed to bring in some extra income. To do this, she started bartending and taking on small catering gigs on the side.

“I’d always cooked,” she says. “I’d regularly have dinner parties that were way too big for my house.”

The nexus between cooking and music has always been clear for Kumar, who says her time as a musician influenced her life in the kitchen. Both vocations require collaboration to create something, whether it’s a menu or a song. Plus, they demand a certain level of dedication.

“So much of it is actually just discipline and practice,” she says. “You go through the highs and the lows, trying to not take either too seriously.”

When she wasn’t working, Kumar spent her free time on tour obsessively reading cookbooks. Revered tomes like Jacques Pépin’s La Technique helped her develop an understanding of food in place of traditional instruction.

“I really loved Deborah Madison’s Vegetarian Cooking for Everyone,” she says. “The way she approached vegetables and legumes gave me a lot of explanation on the roles of ingredients.”

Along with insight, Kumar’s voracious appetite for cookbooks instilled a curiosity around the history of food. She noticed culinary parallels between her hometown and the American South, not only in their respective abundance of fresh produce and markets, but also how they’ve changed over time.

“I started thinking about the history of people moving and traveling and immigrating and how the food evolved from there,” she says. “I was inspired by it. … I think that’s why I felt so connected here.”

Armed with knowledge and a newfound curiosity, Kumar and her husband decided to make the leap. The brick-and-mortar Garland opened in 2014 after briefly operating as a walk-up window the previous fall. The restaurant specializes in blending flavors from across Asia, particularly the Indian subcontinent, and applying them to the plethora of local ingredients sourced from North Carolina’s many farms.

At first, she says, it was hard to describe the type of cuisine the restaurant served, but now she simply tells people that she “cooks what she likes, and it’s coming from the farm.”

The availability of local meats and produce, like purple-top turnips, mustard greens, and eggplants, reminded her of the markets in her hometown. It was also one of the reasons she fell in love with Raleigh. “It was access to the farmers that made it make sense,” she says.

Cooking is only part of Kumar’s work these days. The rock star–turned–chef has also been busy advocating for restaurants. She sits on several boards, including the Independent Restaurant Solution, where she has worked to secure grants and other funding so independent restaurants can keep their doors open throughout the pandemic.

She says the driving factor behind her advocacy work is a belief that everyone in the industry is facing similar challenges. Working together as a united front is more likely to elicit change than solitary efforts.

“If you think you’re doing this all alone, you aren’t seeing the whole picture,” she says. “We are all interdependent on each other, 100 percent.”

The camaraderie in the Raleigh cooking scene is something Kumar greatly appreciates. It’s also why she thinks Raleigh and the surrounding areas are great places for chefs looking to set up shop—not to mention the bevy of locally sourced ingredients.

“If you look at the [James] Beard list from the last several years, it’s dominated by chefs from North Carolina,” she says. “It’s not easy to be a chef anywhere, but it is easy to be inspired here.”

Kumar has several projects in the works, including product launches and a “small, new concept,” but for now, she’s keeping those details close to the chest. In the meantime, she would like to find time to pick up her guitar again and maybe even go on a few trips. Work at the restaurant has been grueling over the last few years that she’s had hardly any time to do anything else.

“I’m just dying to have some more time to play music and hopefully travel,” she says.