Restauration was just a greasy spoon diner when Dana Tanner took over. Now it is a top brunch spot in Long Beach.

The Joys and Trials of Being a Restaurant Owner

Long hours. Lower wages. It isn't always easy, but there's nothing quite like owning your own restaurant.
January 2018 Amanda Baltazar

Since she was 17, Dana Tanner has been working in restaurants, a span of two decades. And since 2014, she’s been working in her dream job. She’s making less money than she did previously, but she’s happier.

What changed? Tanner went from being an employee—a host, a server, in management roles—to an employer, when she and a partner purchased Restauration in Long Beach, California.

Now, Tanner may earn less but she works less, too—45–50 hours per week, as opposed to 55–60, with two hours per day of commuting in her last role, where she was the operations manager for a restaurant group. The best thing is that her hours are flexible, so she can maximize time with her kids. This means, she says, that her hours “are all over the place—much more spread out. I might be doing things before my kids get up and at night and I do work four full shifts per week.”

However, on the downside as a business owner—and one who lives literally around the corner from her work—she says she never fully escapes the restaurant. “My brain never turns off from the business.”

Along with the obvious plus of managing her own schedule, Tanner says there are other positives to being a restaurant owner. “Seeing your vision come to fruition is really rewarding,” she says. “And I’m no longer building a business for someone else.”

She takes great pride in Restauration, which was a greasy spoon diner when she took over and now is a top brunch spot in Long Beach, serving local food to a mostly local clientele. 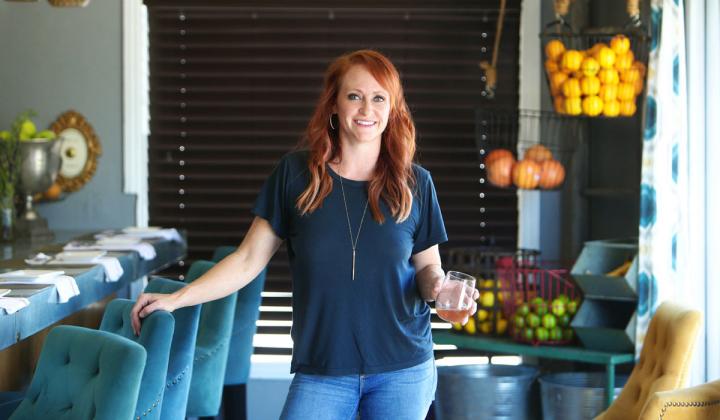 Dana Tanner says owning a restaurant has allowed her to be more flexible with hours, but her "brain never turns off from the business.”

And she’s proud of the product her restaurant delivers to the table. Restauration grows about 30 percent of its food on 950 square feet (the restaurant owns the lot and it’s farmed specifically for it). Tanner also gets many vegetables and products from local farmers and vendors.

As for the negatives, besides the slight drop in income? There’s the cost of everything in California—from rent to workers comp, and minimum wage, she says. “Our profit margins are certainly smaller than I’d like,” she says, “so you try to be creative with your labor.” She tries not to overstaff the restaurant, and keeps a sharp eye on overtime.

At the end of the day, Tanner has no regrets about working for herself. “The more you put in, the more you get back,” she says. “And seeing people happy in the restaurant and knowing that’s because of you feels good.”

Lisabet Summa is a restaurant owner, but on a different scale to Tanner. Since 1996 she has been one of the partners of Big Time Restaurant Group in West Palm Beach, Florida, which owns 14 restaurants and six concepts with more coming this year.

When Big Time first approached Summa, she was working as a chef. The offer made her put on her forward-thinking hat. “I told them I had a job and I wanted to be a partner,” she says.

“Looking back now, 20 years later, I realize how formative that arrangement was,” she says. “I tell young people now how important it is to get things set in stone. You need to think about where you want to go in your career.”

Summa has never regretted her move, although her life has changed significantly. While she worked mostly as a chef for Big Time for the first decade, she now spends more time in the corporate offices, and is in at least one restaurant every day.

Now she works on everything from kitchen design to training materials and overseeing all of the staff. “It’s part of my job to make sure everyone else is successful,” she says. Any cooking she does is for training, development and restaurant openings. These days, she says, she cooks more for pleasure at home than she does for Big Time. 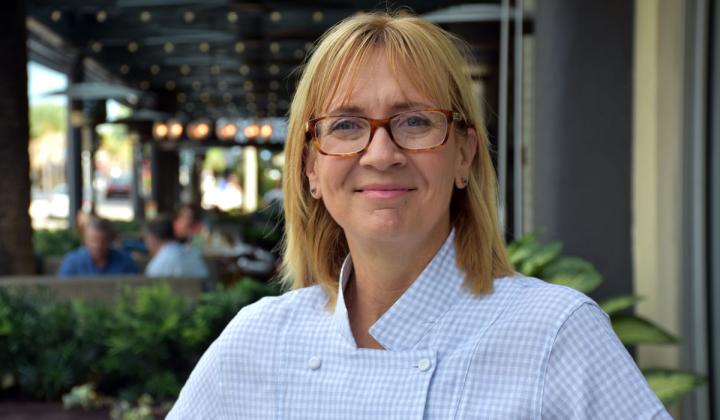 For Lisabet Summa, one of the partners of Big Time Restaurant Group in West Palm Beach, Florida, "seeing young people grow and flourish is the most rewarding part of this job.”

And she’s OK with that. Now in her late 50s, the best thing about being in her position is getting to know the group’s employees, “and knowing you are a formative part of their careers and their lives and livelihoods. Seeing young people grow and flourish is the most rewarding part of this job.”

Indeed, she says: “The most important thing we do is mentoring young people and developing their talents.”

Like Summa, Jimmy Marino loves working with his employees. And teaching them is also the most rewarding part of his job. Marino is the co-owner and founder of The Lexington House in Los Gatos, California, and Black Sheep Brasserie in San Jose.

As well as his staff, he loves making guests happy. “Seeing them forget the outside world and enjoy themselves is great. I always love hearing from guests that they enjoyed our service or food or staff or the ambience of the place. I love being able to curate and showcase the things and flavors. That is what I love and why [it] doesn't sometimes feel like work, and why I come back day in and day out. It’s the pride of doing something on one's own terms.”

However, since opening his first restaurant in Los Gatos four years ago, he says his income is less or maybe equal to what he was earning previously. This is partly due to the loans he had to take out to open both locations, but it still doesn’t perturb him too much. “It is impossible to quantify the price and feeling of being your own boss.”

He even works more, too, though admits he put in a lot of extra hours when he was a restaurant employee. “It was easier to disappear for a few days with no stress or worries on my mind, which is now not the case.” Currently, he works anywhere from 45–65 hours per week, but expects those hours to dwindle if the business continues to do well. 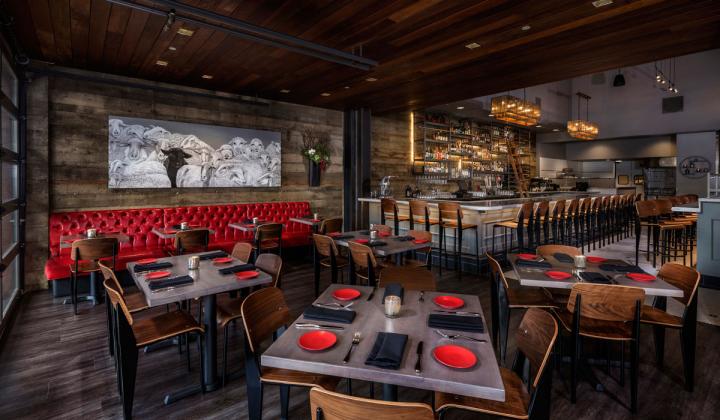 Jimmy Marino enjoys teaching and training employees at his restaurants, like Black Sheep Brasserie pictured above.

Dave Woodall opened Red Herring in Los Angeles just over a year ago and finds he works more these days as well—and makes less.

“I do not have days off, down time or anything resembling a personal life anymore. I am in the restaurant every day and log about 60 hours a week in the kitchen, in addition to administrative work, staffing, financial oversight, menu development and promotional work,” he says.

And he only takes the barest minimum of a paycheck, just for tax purposes. “but it's a pittance for the amount of work.” He’ll take more, he says, as the business grows.

Even though Woodall has been in the hospitality industry for a couple of decades, he says exposure and keeping his brand current in the minds of our customers continue to be big challenges. 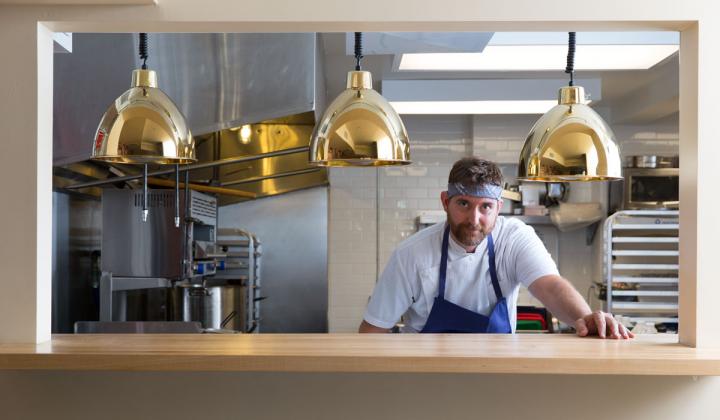 Despite the hardships, Chef Dave Woodall wouldn’t trade being an owner for anything.

“Branding, promotion and outreach are offering the steepest learning curves at this point. You think, when you open your doors, that being good at what you do, offering an excellent product, and keeping customers happy are all you need in order to succeed. The reality, however, is that a new business needs to aggressively market itself in order to develop the massive customer base needed to keep revenue up,” he says.

He’s also grappling with being an employer of employees. “Now the more intangible elements of personal satisfaction, security and accomplishment in their roles come into play,” Woodall says. “I need to make sure the restaurant is successful, so they can continue to work and pay their bills, but also so they can be proud of what they do and feel encouraged and supported. So much of their performance is tied to the attitude with which they approach their work so, creating and maintaining a positive culture of excellence in the work place is an essential component of my ownership experience.”

Like other restaurant entrepreneurs, despite the hard work, the hours and the low pay, Woodall wouldn’t trade being an owner for anything.

“When I make a decision, it’s a choice that will affect my staff and their families and, looking at the world through that lens, I have found a morality and humility I could never have known as an employee. It demands the best of you and in return rewards you with clearer understanding of yourself and what really matters to you,” he says.