Chef Robbyns Martinez makes sure every menu item in the multi-concept multi-unit portfolio adheres to the expectations of the J.E.Y. Hospitality Group.
February 2017 Amelia Levin

It takes a certain type of chef to be able to research and execute—with precision and consistency—several types of cuisines at multiple brands and locations, all at the same time. But that’s the nature and the job of Chef Robbyns Martinez, a Cuban native, who has gone beyond his culinary heritage to research and study authentic Chinese, Italian, and Mexican cuisines, as well as burgers and beverages, for the four full-service restaurant concepts owned by the J.E.Y. Hospitality Group. 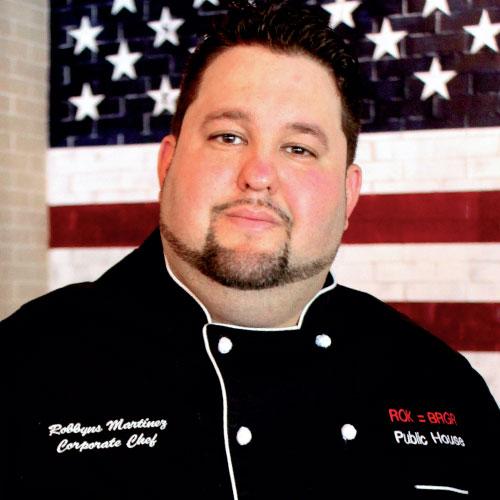 “Passion is something you can’t teach,” says Chef Martinez, who strives to set an example for the chefs in his restaurant group by sharing his love for cooking and by finding out what his team enjoys cooking.

Based in Fort Lauderdale, Florida, J.E.Y.—short for Just Enjoy Yourself—holds a gastropub, a polished-casual sports tavern, a gourmet pizza eatery, and a taqueira and tequila bar in its portfolio. In addition to the four restaurant concepts, the group also owns The Apothecary, a high-end bar in its hometown.

In 2010, corporate chef Martinez teamed up with restaurateur Marc Falsetto to create the menu for ROK:BRGR Burger Bar & Gastropub, which now has locations in Fort Lauderdale, Hallandale Beach, South Miami, and Delray Beach, with plans for two more locations on the horizon. Since then, he has helped develop and continually update that menu as well as the menus across the hospitality group’s brands.

Tacocraft is J.E.Y.’s taqueria and tequila bar that features more than 100 tequilas and a menu of 15 tacos in a setting defined by reclaimed wood, graffiti art, and a notable L.A.–style vibe. Tacocraft is growing from its two established units to four locations, all in South Florida. The group’s Himmarshee Public House is an American-style tavern in Fort Lauderdale that turns into more of a bar and lounge at night. And Pizzacraft, in the same city, specializes in wood-fired artisan pizza and Old World Italian dishes. Attached to Pizzacraft is J.E.Y.’s hidden speakeasy cocktail bar, Apothecary, and the group plans to open another bar concept, Mercado Negro, a modern mezcaleria, in Miami.

Each day, Chef Martinez starts his morning at the Miami restaurants, then travels north to the Fort Lauderdale spots to test the food coming out of the kitchens, meet with his chefs, and plan ahead for any menu changes and upcoming events. Across the group’s 10 locations, he manages a team of 100 back-of-house staff. It helps that five of the locations, one of each of the concepts, are located on the same street in Fort Lauderdale, where the team has been credited with helping revitalize downtown Himmarshee Village. Still, there’s a lot of time and travel required, but he says, “It’s important to make sure everything is consistent—the quality of the meats, the sauces, the fries—everything.” Martinez also prefers to work with local Florida farms for his produce and some meats, so that requires checking the consistency of the product coming in.

At ROK:BRGR, Martinez oversees 15 different burgers and other creative, American comfort food dishes like lobster corn dogs, mac 'n' cheese with bacon and short ribs, and tuna tacos. Additionally, the restaurant has a popular Sunday brunch, augmented with live DJs, resulting in a line that usually wraps around the block.

The wide variety of concepts owned and operated by J.E.Y. and their varied locales means Martinez has to cater to a very diverse clientele. “I have to know that each city is a little different. South Miami is a little older and more family-oriented, but Fort Lauderdale has many young business professionals in their 20s and 30s, so we have to make the restaurants fun for them and we have to think of how to change the menu,” he says.

Each month, Martinez joins with his corporate team to review the items that sell well versus those that don’t. They evaluate product reports as well as in-store and online customer feedback, and then brainstorm possible additions or replacements for the menu. It’s all a very hands-on process, and tastings are hosted regularly at the hospitality group’s test kitchen so that other corporate team members have a chance to sample the fare and offer feedback.

The latest menu addition was a new burger at ROK:BRGR: one with Habanero Pepper cheese (which is trending in Miami) and a Diablo-inspired spice blend and sauce. To come up with new ideas like these, Martinez says he often travels with the team around the country and attends conferences, and also visits other restaurants and takes notes. He’ll also study cookbooks, magazines, and more for ideas.

This is the kind of enthusiasm for the culinary world that Chef Martinez expects from his head chefs. “Passion is something you can’t teach,” he says. “I can train everyone, but if there is no passion for the job, there’s nothing I can do about that.”

He’ll spend entire shifts working with his head chefs to get a feel for what they like to cook and to make sure the quality is consistent. “I try to set an example with my love for cooking,” he says.

Even on the beverage side, Chef Martinez will work with bartenders to share ideas and help introduce ingredients that he has sourced from local farms that could be good to use in the drinks. He’ll also bring some of the bar ingredients into the kitchen—resulting in dishes like tequila-infused cheesy beer-battered onion rings. Every few months he teams up with the head chefs in the group to host special beer, wine, tequila, mezcal, and other paired dinners.

J.E.Y. will also cross-promote the brands when it aligns with the company’s strategic goals. One example of cross-marketing is that the  happy hours across all locations award guests wooden chips, branded with all of the logos, that can be redeemed at any of the J.E.Y. locations. This helps drive traffic among the locations, and encourages loyal guests of one brand to try the others.

Looking forward, the group plans to expand throughout South Florida and even beyond. “We’re on track to open more ROK:BRGRs and Tacocrafts in the next five years or so,” Martinez says, adding that expansion will extend beyond the Sunshine State. While he might not be able to make an afternoon run to every unit as the portfolio grows, he’s confident that the systems he has tried hard to instill will help maintain the quality and consistency that are essential to multi-unit success.