Inside the Kitchen of the Formidable Nyesha Arrington

The peculiar identity of Los Angeles’ food scene is something that reveals itself slowly. Unlike New York, with its plethora of everything from pizza to Michelin-starred temples, or a coastal city like Miami, which boasts unparalleled seafood from stone crabs to ceviche, L.A., until recently, has been far more inscrutable.

There have always been certain styles of cuisine associated with it—where would sun-dried tomatoes be if not for Southern California restaurants of the 1990s?—but it’s only within the last decade or so that the city has properly matured into its dining scene. It is far from monolithic, of course, but from fine-dining to fast-casual spots, there is now a visible thread of L.A.-specific DNA that runs through the city’s most innovative properties. 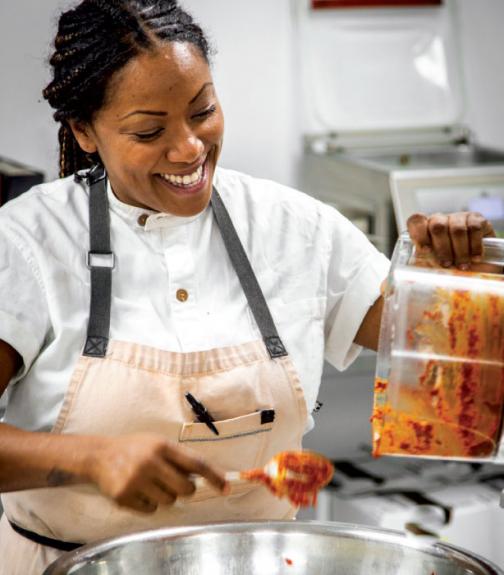 Kitchen tool you can’t live without: Honestly, as basic as it sounds, a spoon.
Favorite person to cook for: My dad. He’s my best friend.
Favorite ingredient right now: Morel mushrooms.
The last thing you read: You Are a Badass by Jen Sincero.
Favorite way to destress outside the kitchen: Find me on the Venice boardwalk with my French bulldog in my basket and with reggae in my ears.

One chef at the forefront of Angeleno cuisine is the formidable Nyesha Arrington. Classically trained not only at the Culinary School at the Art Institute of California (which has since closed), but also under master Michelin-starred chefs Josiah Citrin and Joël Robuchon, Arrington is also an L.A. native, whose parents grew up in the Crenshaw area.

She jokes that her culinary career began exceptionally early, at age 5 under the tutelage of her Korean grandmother. “I helped her jar sauces; she would make all these different spice levels,” Arrington recalls. “At my parents’ house, we had ketchup, mustard, and mayo, but she would have these little glass jars of homemade things. I always thought that was so interesting.”

Arrington and her family would often be enlisted to make wontons or dumplings, a communal experience that first sparked the idea of cooking as a vocation. “I always loved the idea of creating something and offering it to people,” she says. “People say cooking is a labor of love and it really is: The food is going to nurture another human being.”

While Arrington learned the basics of Korean cuisine from her grandmother, her father’s side exposed her to entirely different, though no less delicious, traditions. Family gatherings there were a feast of “gumbo, shrimp and grits, cornbread, and all of those types of dishes. And I remember loving that,” she says.

She credits her multicultural upbringing with expanding her palate at a young age, a tool for which she’s still grateful in her professional life. “It really freed up my terroir of what inspires me,” she says. Nowhere is this more distilled than in one of her vegetable recipes: a stew of collard greens and kimchi. “When I made that dish I said, ‘Oh my God, this is truly authentic Nyesha,’ because it’s a conglomeration of two worlds.”

Which brings us back to the question of “authentic” Los Angeles cuisine. It is remarkably similar to Arrington: a mashup of cultures, and of highly refined classical techniques paired with traditional home cooking; something that could only exist in a melting pot culture like L.A.’s. “In the past five years, there’s been this amazing, emerging amalgamation of cultures coming to the forefront,” Arrington says. “Flavors like Filipino, Ethiopian and Latin that were not being celebrated before.” And, so, while the menus at some of L.A.’s most praised restaurants take inspiration from all over the world, what unites them is a commitment to pushing the boundaries. That could come in the form of a new type of fusion cuisine, or, at the other end of the spectrum, a dedication to recreating traditional food from a place often overlooked, like the Philippines. “I try to always touch three points in a dish,” she says. “A sense of nostalgia, a bit of seasonality, and a cultural conversation. Those nuances are what make up Angeleno cuisine.”

And, of course, no discussion of Angeleno food is complete without highlighting the area’s bounty of produce. “We’re very fortunate to have access to phenomenal product,” Arrington notes. “Farm-to-table was all the conversation in early 2000s, but now it’s almost like you don’t even have to say it; how could you do it any other way?”

The chef, who has had relationships with some of her farmers for over a decade, is not only a major proponent of vegetables, but also of eating sustainably. “The farmers are the ones talking to me about CO2 emissions, carbon footprints, and how our food choices affect society,” she says. “I have a responsibility to be a part of that, and I think I have a bigger purpose to connect the dots because people are losing touch with Mother Nature.”

Arrington, luckily or unluckily, now has a bit more time to focus on that: Her lauded Santa Monica restaurant Native closed in March due to swelling overhead costs. She is philosophical about its somewhat abrupt end, however. “I’m a firm believer in failing upwards,” she says. “I want to keep fostering growth: growth in the world, growth from a food standpoint, growth in people.” She’d also like to focus on creating a better safety net for up-and-coming restaurateurs. “There’s got to be a better way to water the soil,” she says of the rough process of opening a restaurant. “It’s very taxing and it takes a long time to build a team. Right now, the food space is like the Wild West.”

What shape her next project will take is still unknown, but, in the meantime, Arrington is on the move. Her hiatus will have her doing everything from learning about chocolate from a Mayan shaman to mastering under-the-ground cooking in New Zealand. “I don’t know if I have the answer, exactly,” Arrington says of what the future holds. “But I do know I will never stop cooking.”