Dave and Megan Miller, owners of bakery-café Baker Miller, preemptively moved all eight staff to full-time and overtime in order to devote all their energy to pivoting operations to delivery and carryout

Inside the Chicago Restaurant World's Fight to Survive a Pandemic

Chicago was the first major city to go under mandatory shut-down of all restaurants and bars. Here’s how the city’s half-million hospitality workers are banding together to support one another.

Before Illinois Governor J.B. Pritzker announced the statewide closure of bars and restaurants on March 15 amid the growing threat of the novel coronavirus, an uneasy feeling was spreading through many in Chicago’s restaurant community that calls for diligent handwashing and social distancing alone weren’t going to cut it. Some ramped up carryout and delivery; others wrote plans of action in case of the worst-case scenarios already unfolding across Europe and Asia.

Then Saturday dawned as the city’s unofficial St. Patrick’s Day observance, and even the cancellation of annual parades and dying of the river didn’t stop crowds of consumers clad in kelly-green from lining up at bars of Chi-Town. Meanwhile, halfway across the world, European cities closed their cafés and restaurants as part of sweeping measures to contain the virus.

COULD OLDER DINERS PROVIDE A POTENTIAL CURE FOR RESTAURANTS?

“At some juncture, it sounds cliché, but if you're not part of the solution, you’re part of the problem,” Manion says, noting that most of his employees come to work on public transit, which made him concerned for their safety and those they’d come in contact with. “I wish somebody in leadership would just call [for a lockdown]. Choosing between my business and the health of my employees is a choice I thought I’d never have to make."

As the domino effect of virus containment inevitably brings dine-in bans across states and municipalities including Colorado, Minnesota, Los Angeles, New York, Louisiana, Ohio, Washington, and Washington, D.C., chefs and owners are facing similar quandaries to Manion’s. Should they halt operations and await the government’s response or pivot to a different restaurant model in an effort to shore up cash flow and keep employees on staff? 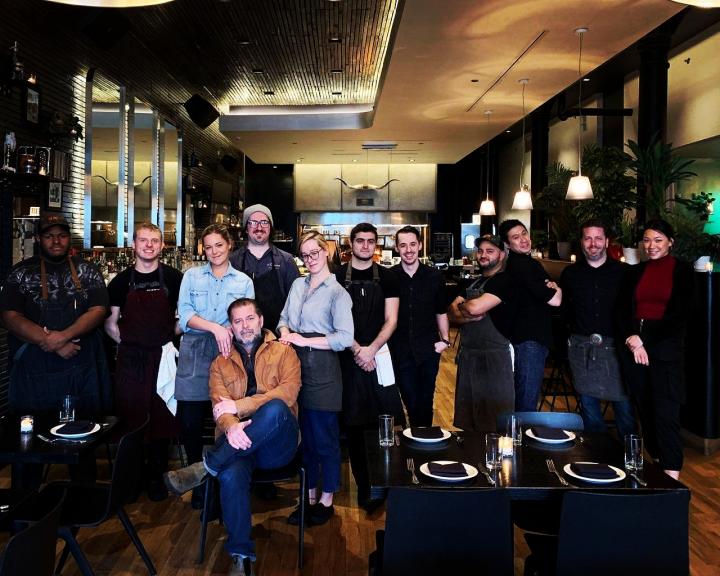 “At some juncture, it sounds cliché, but if you're not part of the solution, you’re part of the problem,” says John Manion, chef and owner of El Che Steakhouse & Bar in Chicago’s West Loop.

The mother of invention

With Chicagoans mostly confined to their houses in the coming weeks, restaurants are finding innovative ways to re-interpret to-go as they scramble to keep the doors open and lights on. For starters, assembling order-ahead family-size meals and meals kits of ingredients with accompanying recipes is one way to feed guests without putting them or restaurant staff at risk.

Brian Jupiter, executive chef of New Orleans-inspired Ina Mae Tavern, is hosting a live online cooking demo on Instagram of his Nashville hot chicken po’boy, and making all the ingredients available for pickup by consumers.

Dave and Megan Miller, owners of bakery-café Baker Miller on the city’s North Side, saw the writing on the wall last week amid shutdowns across Europe. So the couple preemptively moved all eight staff to full-time and overtime in order to devote all their energy to pivoting operations to delivery and carryout—staggering announcements on their social channels to keep from overwhelming patrons as things evolve at breakneck speed.

The Millers launched an online ordering platform that links to the company’s website; phased in all-paper packaging to accommodate to-go and for employee safety; shifted one employee to solely cleaning duty; added faster-baking white-bread loaves to meet higher demand; and—in a nod to Depression-era ingenuity—introduced bread delivery service, tapping a local transporter to oversee deliveries of up to three times a week. Customers can order online, and the owners hope to eventually add family-style meals to the program.

“Honestly, it sounds weird, but I’ve been looking at the Depression,” Dave Miller says. “What do we have that people need right now? We have bread. That’s where that creativity is coming from—an old-school route with new technology.”

Baker Miller did a quarter of its average business on Monday but bounced back to 40 percent on Tuesday—the first official day of the dine-in ban—thanks largely to the bread deliveries, which more than 50 customers have signed on for.

“Honestly, it sounds weird, but I’ve been looking at the Depression," says Dave Miller of of bakery-café Baker Miller. "What do we have that people need right now? We have bread. That’s where that creativity is coming from—an old-school route with new technology.”

It’s just enough to cover payroll without cutting any staff, for now. Even so, Miller has already started negotiations with his landlord as end-of-month bills inevitably draw near. He’s concerned that state and federal leadership is underestimating the length of social isolation needed to contain the public health crisis. If the situation unspools slowly, restaurants will need far more than a tax break in December to survive, particularly when so many were already operating on a shoestring.

“I don't think they’re giving us the full picture by saying it will be two weeks; anyone looking at Europe knows it will be longer,” he says. “At this point, short-term funding is really integral. I don’t care if I’m paying high interest on it as long as I can get access to it. The end of the month is going to be a wake-up call for a lot of people.”

Sunday’s mandate spurred Chicago’s tight-knit restaurant community into action of another sort, too, and it all started with one chef texting one another in search of solace and a collective plan of action. The text chain begot a gathering on Sunday at Bucktown cocktail bar Chef’s Special of some 50 chefs and independent restaurant owners, including Manion, Jason Vincent of Giant and Chef’s Special, Rick Bayless, Jason Hammel of Lula Cafe, Erick Williams of Virtue, and Mindy Segal of Mindy’s Hot Chocolate. 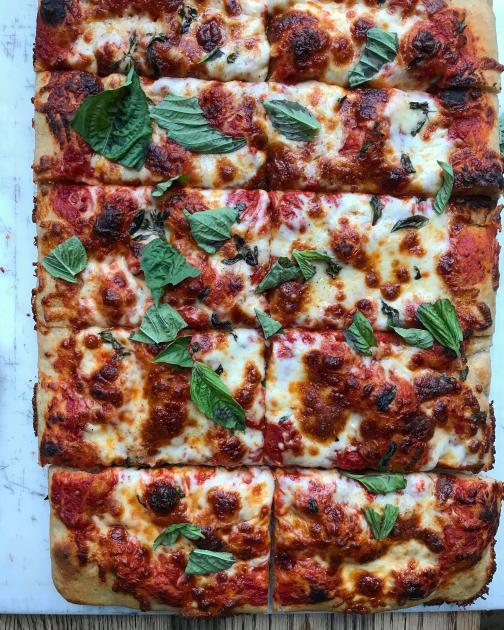 Alcohol sales have given Table, Donkey and Stick a boost.

The group released a statement crafted by Hammel calling for Pritzker to provide emergency unemployment benefits to all hourly and salaried workers, eliminate the payroll tax for business owners and offer rent and loan abatement for restaurant workers, who make up a tenth of Chicago’s workforce, or about 500,000 people, according to the Illinois Restaurant Association.

“Many small-restaurant owners and hourly employees simply will not survive this close without your help,” Hammel said in a video addressing the governor on Instagram. “Show us what those people with means and power intend to do for those who have none.”

Getting in the relief pipeline

Restaurants began offering discounted gift cards for quick cash injections and cooking their inventories to supply industry workers and local residents in need. Some launched fundraising initiatives to support financial relief for affected hourly employees. Logan Square tiki bar Lost Lake, which laid off its whole staff, set up a virtual tip jar. In exchange for donations, Lost Lake would send out a biweekly quarantine newsletter featuring cocktail and food recipes and Q&As with employees, with all funds going to employees.

On March 16 the governor announced a new policy enabling those unemployed because of the shutdown to collect benefits immediately, as well as a moratorium on shutoffs for all utility companies—prompting dozens of Chicago restaurants to fully suspend operations. The state liquor commission reiterated that licensed restaurants and bars can sell unopened bottles or cans of alcohol for takeout and delivery, all but urging businesses to sell alcohol with to-go food orders.

“Doing pizza delivery and takeout is about the people I know. We need action that I don't think anyone is talking about yet,” says Table, Donkey and Stick's Matt Sussman.

Starting with a few test pizzas on Sunday, owner Matt Sussman called on friends to place pickup and delivery orders, which he drove over himself. By day two, Table, Donkey and Stick was collecting orders through a Google form, selling 30 pies. The operation netted $1,353 in sales—$137 of it from bottles of wine and beer—“which would typically be a slow Monday, but I would call it a win given what we're facing,” Sussman says. Day three, alcohol sales reached $317 of $1,385 net, which was notable since they sold the same number of pies. The eatery will join Caviar this week and roll out an in-house takeout and delivery platform, and Sussman will develop additional branding for the pizza venture.

“It’s not going to be the biggest delivery business in Chicago, but I think we can support a good chunk of our staff on that, maybe even most of them,” Sussman says. “But doing pizza delivery and takeout is about the people I know. We need action that I don't think anyone is talking about yet.”

Sussman’s full-time kitchen staff will be on 70 to 80 percent hours, and he plans to schedule the rest of the staff such that they’re able to collect the most benefits in accordance with the state’s partial unemployment rules.

Even so, for a growing number of chefs and owners who remain in limbo as debts pile up and a darkening picture becomes clear, the most sensible option is one they’ve been scrambling to avoid. After two agonizing days of weighing every possibility with his partners and spending half a day with his accountant, on Tuesday Manion laid off his entire staff of more than 30—most of whom were part time—in an effort to help them access unemployment benefits as quickly as possible.

“I don’t care how many f-ing T-shirts or carryout steaks we sell, we’re just not set up to do to-go. And right now, getting people relief as fast as possible is the best thing I can do for them,” he says, adding that it didn’t make sense to keep full-time employees like managers on the payroll, either, even though he’s not paying himself. “Without generating any money, we don't have jobs for these people. To eat into our reserves, which like most small businesses are very, very slim, we need to have a business for our employees to come back to,” he adds.