True to his own eclectic background, chef Eom Kyoo pulls flavors and techniques from around the world in dishes, such as the Tuna Tataki (pictured above).

How One Chef’s Ability to Adapt Shaped His Career

Dirty Habit’s Kyoo Eom has learned firsthand the power of adaptation, and now he’s sharing it with guests.

Growing up in South Korea, Chef Kyoo Eom always harbored dreams of immigrating to America, but he saw himself in a role quite different than his current profession. Although he was studying food science and technology while at college, “somehow, I decided to come to the United States not to be a chef, but to do computer science or record music,” Eom says. 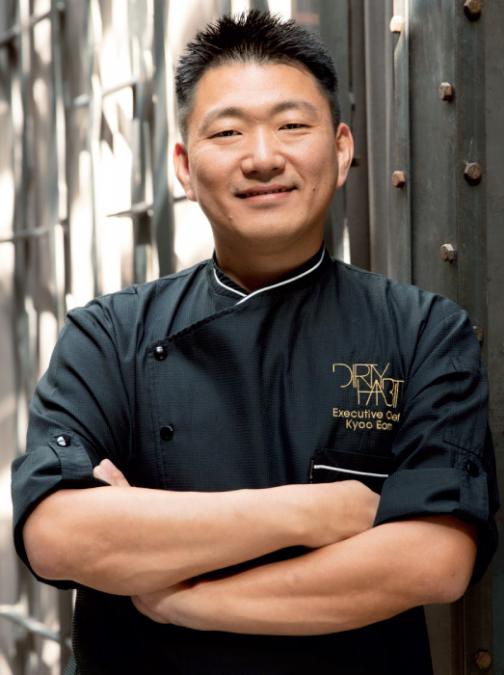 “In my country, at the time, [if you were a cook] it meant you didn’t have a good education,” Eom says.

But regardless of the profession’s reputation, Eom had always been drawn to cooking, even making his sister’s lunches for her when they were in elementary school. It was his sister, in fact, who first suggested he attend culinary school, although he initially bristled at the idea. But after reflecting that perhaps computer jobs were “for the young people” and that a music career may not be as lucrative as he would like, Eom enrolled at Le Cordon Bleu at Brown College in 2003. And to his surprise, he really enjoyed it.

Successful stints at chef Daniel Boulud’s DB Bistro Moderne and Café Boulud in New York City soon followed, and the chef has been in high demand ever since. “The New York experience was very good for me,” he says. “We worked hard; we were competing with ourselves. And if you weren’t good enough, other people moved up to the next station. Or you got fired,” he laughs. “But a lot of people I met there”—luminaries like David Chang and Andrew Carmellini—“they’re all very successful now.”

The start of Eom’s culinary career is also mirrored in his food and how he runs his kitchen. In short, he is adept at adaptation, whether that’s acclimating to a new culture and cuisine or simply creating a new dish that draws from disparate influences. Even his restaurant, Dirty Habit, which is located inside the Kimpton Hotel Monaco in D.C.’s Penn Quarter neighborhood, is a product of adaptation, an offshoot of another Dirty Habit in San Francisco.

When the owners first approached Eom to have him open and run the D.C. location, the presence of a sister property was almost enough to make him turn down the opportunity altogether. “I didn’t like the idea because I felt like a chef in a chain restaurant,” he said. “But the owners told me, ‘It’s totally different. It’s 3,000 miles away.’ They gave me a lot of freedom and said, ‘Chef, do whatever you want.’” And that made me really happy.”

Dirty Habit’s D.C. menu is what Eom refers to as a postmodern brasserie, but it’s clear that he draws from all of his experiences around the globe to create something uniquely his. Take, for example, his dumpling dish, which was inspired by a recipe that his family made when he was young. But here, it’s adapted for a more global palate with the addition of rich foie gras and heady truffles. “That’s how I want to eat,” he said. A short rib dish straddles a similar line between East and West, with a Korean barbecue–style marinade but served atop buttery mashed potatoes instead of kimchi and rice.

Another major adaptation for Eom was working in a restaurant inside a hotel, whose guests may want lunch at 4 p.m. or crave egg dishes midweek. For that reason, Dirty Habit serves brunch every day. “You can even get a hamburger and fries at 8 a.m., if you’re hung over,” he says.

For the chef, it was important that the guests feel pampered whenever they step into the restaurant, even if it’s not at a traditional mealtime. “I don’t want to have to say, ‘Sorry, we’re closed,’ to the guests,” he says. “That’s not very good hospitality. They’re already here; I always want to give them something.” An added bonus: Since most restaurant industry workers don’t have the weekends off, Dirty Habit’s weekday brunch gives everyone a chance to sample the bottomless mimosas.

One of Eom’s best qualities as a chef is this generosity of spirit. Before working on a new set of dishes, he always makes sure to query his servers on what they think the guests might want to see more of on the menu. “If we only have two salads, they might say that maybe we need one more. Or they might say, ‘Chef, this dish is good, but customers aren’t looking for something this heavy right now.’ We always listen,” he says. And those who work in the kitchen also have a hand in inspiring new dishes. “I always believe I can learn something from everyone,” he says. The huevos rancheros dish, for one, was inspired by some of Eom’s Hispanic cooks, who introduced the dish to him.

Eom hopes these sorts of fusion dishes will continue to spur D.C.’s culinary revolution. While the city’s restaurant scene was previously known as rather homogenous and filled with a preponderance of classic steakhouses or traditional American white-tablecloth spots, it has quickly become one of the East Coast’s top destinations for creative cuisine. And, the chef now sees diners with a greater sense of curiosity as well. “A lot of people weren’t as open-minded before, food wise,” he says. “But now, they try more new things.”