Cheng builds her vegan dishes from differing textures like chewy and soft meets crispy and crunchy to create a full experience for the diner.

Cheng wants chefs to treat vegetables with the same amount of care and thought as they put into meat dishes.
February 2019 Juliet Izon

In recent years, especially in larger cities, a vegan renaissance has taken hold. Vegetables, grains, and legumes are taking center stage in dishes instead of meat-like substitutes. The emphasis for this new veganism is on whole-food eating, as opposed to making a processed soy product masquerade as a chicken cutlet. One of the chefs at the forefront of this movement, both in the U.S. and internationally, is Daphne Cheng.

Vegan since the age of 14, after reading the seminal nutrition book The China Study by T. Colin Campbell, Cheng is passionate about her vegetables. She received her professional training at the Natural Gourmet Institute in New York City, “but honestly, I learned more outside of school than I actually learned in school,” she says. “So, I consider myself more self-taught.” 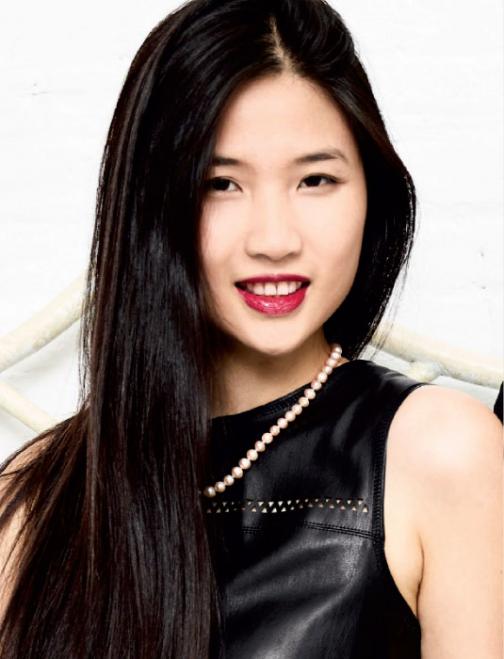 What Cheng gleaned, first through hosting a weekly supper club with a 10-course tasting menu and later by revamping traditional menus into vegan ones at several established New York restaurants like those by Ravi DeRossi of Death & Company fame, was that cooking elevated vegan fare doesn’t have to be complicated. It all hinges on sourcing delicious product and respecting its integrity. “Why can’t you treat a vegetable with the same amount of care and thought that you would put into a meat dish?” Cheng says. “I’m not just treating them like a side dish; they’re so diverse. They have so many different flavors and textures already. There are limitless combinations of what you can do with vegetables.”

It is no surprise, then, that Cheng eschews vegan preparations that attempt to mimic other, non-vegan foods. “You don’t have to pretend to be meat in order for it to taste good,” Cheng says. And for detractors who complain that a lack of meat or dairy will leave them hungry, Cheng has a whole treasure trove of alternatives. “Nuts, seeds, grains, beans, and legumes provide more of the substantial and heavier textures,” she says. Dairy replacement is also an easy fix. The specific substitute will depend on whether the dish is savory or sweet, but Cheng notes that coconut cream or milk is her personal favorite.

For DeRossi’s Ladybird in Greenwich Village, a self-described “vegetable bar,” Cheng created an entire vegan small plates menu including a vegan fondue. This dish paid homage to DeRossi’s earlier, non-vegan restaurant, The Bourgeois Pig, which was famous for its decadent fondues. While a dairy-free version of this decidedly cheese-centric dish may sound impossible, Cheng used a combination of cashew and coconut—“The two together create the closest flavor profile for dairy,” she says—which is then blended with savory mix-ins like charred ramp or Chardonnay and artichoke.

Her mastery also extends to pastry: these desserts do not suffer from their lack of eggs or butter. “A typical cake, where the egg is only playing the role of emulsifier—where it’s not actually a structural component—just needs a little bit of extra liquid and extra oil [to replace it]. It doesn’t need to be fancy,” Cheng says. Even traditionally butter-heavy breads, like brioche or croissants, can be made successfully with the right combination of oils.

While Cheng first became vegan for health reasons, the sustainability of the diet has now become almost as important to her. “It’s a key part of what motivates me,” she says. “I’m not the kind of person who likes to lecture, and I don’t think that that’s a very effective way to get people to change their behavior. So, I focus on making it really enjoyable, delicious, easy, and convenient for people to eat this way.”

Cheng’s latest endeavor, a fast-casual concept called Superhuman that just launched in Shanghai, China, attempts to bring quality vegan food to the masses. “The Chinese are such a huge population. What they eat is going to have a huge impact on this planet,” she says. The first U.S. outposts are set to open later this year, in America’s ground zero for vegans, California.

The vegan landscape has changed dramatically since Cheng first became a practitioner as a teenager. “I’ve watched the industry grow up,” she says. “The quality of products that are on the market these days is infinitely better.”

But there is one sector which Cheng finds lacking, and which she is resolved to rectify. “I’ve been wanting to do cheese and dairy products for some time. There’s room for better and for cheaper [alternatives], because a lot of the products are still quite expensive. For it to really be adopted by the mainstream, it’s going to have to become more equal to the actual dairy products that are out there,” she says. Her fondue is a great start.